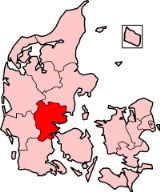 
Vejle Amt (English Vejle County) is a former county
Counties of Denmark
Denmark was until December 31, 2006 divided into 15 counties , and 270 municipalities . On January 1, 2007, the counties were replaced by five Regions and the number of municipalities slashed to 98....
(Danish
Danish language
Danish is a North Germanic language spoken by around six million people, principally in the country of Denmark. It is also spoken by 50,000 Germans of Danish ethnicity in the northern parts of Schleswig-Holstein, Germany, where it holds the status of minority language...
: amt
Amt (subnational entity)
Amt is a type of administrative division governing a group of municipalities, today only found in Germany, but formerly also common in northern European countries. Its size and functions differ by country and the term is roughly equivalent to a U.S...
) on the east coast of the Jutland
Jutland
Jutland , historically also called Cimbria, is the name of the peninsula that juts out in Northern Europe toward the rest of Scandinavia, forming the mainland part of Denmark. It has the North Sea to its west, Kattegat and Skagerrak to its north, the Baltic Sea to its east, and the Danish–German...
peninsula
Peninsula
A peninsula is a piece of land that is bordered by water on three sides but connected to mainland. In many Germanic and Celtic languages and also in Baltic, Slavic and Hungarian, peninsulas are called "half-islands"....
in southern Denmark. The county was abolished effective January 1, 2007, when it was divided between Region Midtjylland
Region Midtjylland
Central Denmark Region or Central Jutland Region is an administrative region of Denmark established on January 1, 2007 as part of the 2007 Danish Municipal Reform, which replaced the traditional counties with five larger regions. At the same time, smaller municipalities were merged into larger...
(i.e. Region Central Jutland) and Region of Southern Denmark. Vejle
Vejle
Vejle is a town in Denmark, in the southeast of the Jutland Peninsula at the head of Vejle Fjord, where the Vejle and Grejs Rivers and their valleys converge. It is the site of the councils of Vejle Municipality and the Region of Southern Denmark...
became the seat of the latter region
Regions of Denmark
The Regions of Denmark were created as part of the 2007 Danish Municipal Reform. The five regions replace the former sixteen counties . At the same time, the number of municipalities was cut from 270 to 98. The reform was made effective on 1 January 2007.- List of regions :The names of the regions...
.

The Jelling stones
Jelling stones
The Jelling stones are massive carved runestones from the 10th century, found at the town of Jelling in Denmark. The older of the two Jelling stones was raised by King Gorm the Old in memory of his wife Thyra...
are archaeological treasures erected by Harald Bluetooth to honour his parents. Encyclopædia Britannica considers the runic inscriptions as the most well known in Denmark.

The Haraldskær Woman
Haraldskær Woman
The Haraldskær Woman is an Iron Age bog body found naturally preserved in a bog in Jutland, Denmark. Labourers discovered the body in 1835 while excavating peat on the Haraldskær Estate...
is a bog body
Bog body
Bog bodies, which are also known as bog people, are the naturally preserved human corpses found in the sphagnum bogs in Northern Europe. Unlike most ancient human remains, bog bodies have retained their skin and internal organs due to the unusual conditions of the surrounding area...
interred in about 500 BC, discovered in a peat bog with a remarkable state of preservation.
The source of this article is wikipedia, the free encyclopedia.  The text of this article is licensed under the GFDL.