Encyclopedia
The Jelling stones are massive carved runestones from the 10th century, found at the town of Jelling
Jelling
Jelling is a village in Denmark with a population of 3,248 , located in Jelling Parish approx. 10 km northwest of Vejle. The city lies 105 metres above sea level.-Location:...
in Denmark
Denmark
Denmark is a Scandinavian country in Northern Europe. The countries of Denmark and Greenland, as well as the Faroe Islands, constitute the Kingdom of Denmark . It is the southernmost of the Nordic countries, southwest of Sweden and south of Norway, and bordered to the south by Germany. Denmark...
. The older of the two Jelling stones was raised by King Gorm the Old
Gorm the Old
Gorm the Old , also called Gorm the Sleepy , was the first historically recognized King of Denmark, reigning from to his death . He ruled from Jelling, and made the oldest of the Jelling Stones in honour of his wife Thyra. Gorm was born before 900 and died .-Ancestry and reign:Gorm is the reported...
in memory of his wife Thyra
Thyra
Thyra was the consort of King Gorm the Old of Denmark. She is believed to have led an army against the Germans. Gorm and Thyra were the parents of King Harald Bluetooth....
. The larger of the two stones was raised by King Gorm's son, Harald Bluetooth in memory of his parents, celebrating his conquest of Denmark and Norway
Norway
Norway , officially the Kingdom of Norway, is a Nordic unitary constitutional monarchy whose territory comprises the western portion of the Scandinavian Peninsula, Jan Mayen, and the Arctic archipelago of Svalbard and Bouvet Island. Norway has a total area of and a population of about 4.9 million...
, and his conversion of the Danes to Christianity.
The runic inscriptions on these stones are considered the most well known in Denmark.

The Jelling stones stand in the churchyard of Jelling church between two large mounds. The stones represent the transitional period between the indigenous Norse paganism
Norse paganism
Norse paganism is the religious traditions of the Norsemen, a Germanic people living in the Nordic countries. Norse paganism is therefore a subset of Germanic paganism, which was practiced in the lands inhabited by the Germanic tribes across most of Northern and Central Europe in the Viking Age...
and the process of Christianization
Christianization of Scandinavia
The Christianization of Scandinavia took place between the 8th and the 12th century. The realms of Scandinavia proper, Denmark, Norway and Sweden, established their own Archdioceses, responsible directly to the Pope, in 1104, 1154 and 1164, respectively...
in Denmark. They are strongly identified with the creation of Denmark as a nation state.

After having been exposed to all kinds of weather for a thousand years cracks are beginning to show. On the 15th of November 2008 experts from UNESCO
UNESCO
The United Nations Educational, Scientific and Cultural Organization is a specialized agency of the United Nations...
examined the stones to determine their condition. Experts have requested the stones be moved to an indoor exhibition hall, or in some other way protected in situ, to prevent further damage from the weather.

Heritage Agency of Denmark decided to keep the stones in their current location and selected a protective design from 157 projects submitted through a competition. The winner of the competition was Nobel Architects. The design features rectangular glass casings strengthened by two solid bronze sides mounted on a supporting steel skeleton. The bronze patina will give off a rusty, greenish colour, highlighting the runestones’ gray and reddish tones and emphasising their monumental character and significance. The glass will be coated with an anti-reflective material that gives the exhibit a greenish hue. A climate system will also keep the inside of the structures at a fixed temperature and humidity. Transoms and other mounting fixtures on the casings will not be visible to visitors.

Although Nobel Architects’ design has won the competition, the Jelling church council must now decide whether the design will be implemented in its existing form or if it should be modified. No date has been given as to when the structures will eventually be completed. 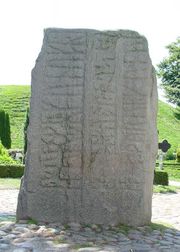 The inscription on the older and smaller of the Jelling stones reads: "King Gormr made this monument in memory of Thyrvé, his wife, Denmark's adornment." (Rundata
Rundata
The Scandinavian Runic-text Data Base is a project involving the creation and maintenance of a database of runic inscriptions. The project's goal is to comprehensively catalog runestones in a machine-readable way for future research...
, DR 41) The Old Norse
Old Norse
Old Norse is a North Germanic language that was spoken by inhabitants of Scandinavia and inhabitants of their overseas settlements during the Viking Age, until about 1300....
inscription in Younger Futhark
Younger Futhark
The Younger Futhark, also called Scandinavian runes, is a runic alphabet, a reduced form of the Elder Futhark, consisting of only 16 characters, in use from ca. 800 CE...
runes appears as follows: 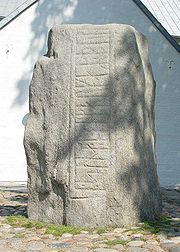 The inscription on the larger of the two Jelling stones reads: "King Haraldr ordered this monument made in memory of Gormr, his father, and in memory of Thyrvé, his mother; that Haraldr who won for himself all of Denmark and Norway and made the Danes Christian." (Rundata
Rundata
The Scandinavian Runic-text Data Base is a project involving the creation and maintenance of a database of runic inscriptions. The project's goal is to comprehensively catalog runestones in a machine-readable way for future research...
, DR 42) 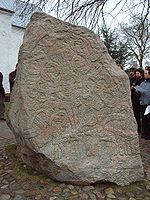 The stone has a figure of Jesus Christ
Jesus
Jesus of Nazareth , commonly referred to as Jesus Christ or simply as Jesus or Christ, is the central figure of Christianity...
on one side and on another side a serpent wrapped around a lion. Christ is depicted as standing in the shape of a cross and entangled in what appear to be branches. One scholar has suggested that this imagry was used to suggest that Christ had replaced the Norse pagan god Odin
Odin
Odin is a major god in Norse mythology and the ruler of Asgard. Homologous with the Anglo-Saxon "Wōden" and the Old High German "Wotan", the name is descended from Proto-Germanic "*Wodanaz" or "*Wōđanaz"....
, who in one myth hung for nine nights in the tree Yggdrasill.

In 1955, a plaster cast of this stone was made for a festival in London. It is now located in the grounds of the Danish Church in London
Nordic churches in London
There are several long-established Nordic churches in London. All seek to provide Lutheran Christian worship and pastoral care to their respective national communities in their own languages...
, 4 St. Katherines Precinct, Regents Park, London. The copy is painted in bright colors, like the original. Most of the original paint has flaked away from the original stone, but enough small specks of paint remained to tell us what the colors looked like when they were freshly painted. A copy is also located in the National Museum of Denmark
National Museum of Denmark
The National Museum of Denmark in Copenhagen is Denmark’s largest museum of cultural history, comprising the histories of Danish and foreign cultures, alike. The museum's main domicile is located a short distance from Strøget at the center of Copenhagen. It contains exhibits from around the world,...
, and another copy, decorated by R. Broby-Johansen in the 1930s, just outside the Jelling museum, which stands within sight of the Jelling mounds. Another copy of this stone was placed in 1936 on the Domplein ('Dom Square') in Utrecht
Utrecht
Utrecht is a city in the Netherlands.The name may also refer to:* Utrecht , of which Utrecht is the capital* Utrecht , including the city of Utrecht* Bishopric of Utrecht* Roman Catholic Archdiocese of Utrecht...
, next to the Cathedral of Utrecht, on the occasion of the 300th anniversary of Utrecht University
Utrecht University
Utrecht University is a university in Utrecht, Netherlands. It is one of the oldest universities in the Netherlands and one of the largest in Europe. Established March 26, 1636, it had an enrollment of 29,082 students in 2008, and employed 8,614 faculty and staff, 570 of which are full professors....
.