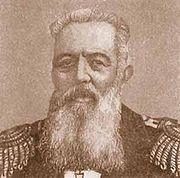 Vasily Stepanovich Zavoyko was an admiral
Admiral
Admiral is the rank, or part of the name of the ranks, of the highest naval officers. It is usually considered a full admiral and above vice admiral and below admiral of the fleet . It is usually abbreviated to "Adm" or "ADM"...
in the Russia
Russia
Russia or , officially known as both Russia and the Russian Federation , is a country in northern Eurasia. It is a federal semi-presidential republic, comprising 83 federal subjects...
n navy.
Born to a noble family of Poltava Governorate
Poltava Governorate
The Poltava Governorate or Government of Poltava was a guberniya in the historical Left-bank Ukraine region of the Russian Empire, which was officially created in 1802 from the disbanded Malorossiya Governorate which was split between the Chernigov Governorate and Poltava Governorate with an...
, in 1827 he took part in the Battle of Navarino
Battle of Navarino
The naval Battle of Navarino was fought on 20 October 1827, during the Greek War of Independence in Navarino Bay , on the west coast of the Peloponnese peninsula, in the Ionian Sea. A combined Ottoman and Egyptian armada was destroyed by a combined British, French and Russian naval force...
, and in 1835-1838 he twice circumnavigated
Circumnavigation
Circumnavigation – literally, "navigation of a circumference" – refers to travelling all the way around an island, a continent, or the entire planet Earth.- Global circumnavigation :...
the Earth.

In 1840 he became an employee of the Russian-American Company
Russian-American Company
The Russian-American Company was a state-sponsored chartered company formed largely on the basis of the so-called Shelekhov-Golikov Company of Grigory Shelekhov and Ivan Larionovich Golikov The Russian-American Company (officially: Under His Imperial Majesty's Highest Protection (patronage)...
and soon became the manager of the Okhotsk
Okhotsk
Okhotsk is an urban locality and a seaport at the mouth of the Okhota River on the Sea of Okhotsk, in Okhotsky District, Khabarovsk Krai, Russia. Population: 4,470 ;...
port. He deduced that the port was inconvenient for trade, as it was too far from the Lena River
Lena River
The Lena is the easternmost of the three great Siberian rivers that flow into the Arctic Ocean . It is the 11th longest river in the world and has the 9th largest watershed...
basin and advocated transfer of the Company port to Ayan. During his exploration Zavoyko discovered the estuary
Estuary
An estuary is a partly enclosed coastal body of water with one or more rivers or streams flowing into it, and with a free connection to the open sea....
of the Amur River (the exploration was later continued by Gennady Nevelskoy
Gennady Nevelskoy
Gennady Ivanovich Nevelskoy was a Russian navigator.In 1848 Nevelskoy led the expedition in the Russian Far East, exploring the area of the Sakhalin and the outlet of the Amur River. He proved that the Strait of Tartary was not a gulf, but indeed a strait, connected to Amur's estuary by a narrow...
, who proved that the Strait of Tartary
Strait of Tartary
Strait of Tartary is a strait in the Pacific Ocean dividing the Russian island of Sakhalin from mainland Asia , connecting the Sea of Okhotsk on the north with...
was not a gulf, but indeed a strait, connected to Amur's estuary by Nevelskoy Strait
Nevelskoy Strait
The Nevelskoy Strait is a strait between Eurasia and Sakhalin that connects the main body of the Strait of Tartary with the Amur Liman . It was named in memory of Capt...
). Zavoyko's reports about the potential importance of the river led to the 1846 expedition to study Amur and ultimately to the incorporation of the modern Primorsky Krai
Primorsky Krai
Primorsky Krai , informally known as Primorye , is a federal subject of Russia . Primorsky means "maritime" in Russian, hence the region is sometimes referred to as Maritime Province or Maritime Territory. Its administrative center is in the city of Vladivostok...
to Russia (see Amur Annexation
Amur Annexation
The Amur Annexation refers to the annexation of the southeast corner of Siberia by Russia from China in 1858–60. The two areas involved are the Priamurye between the Amur River and the Stanovoy Range to the north and the Primorye which runs down the coast from the Amur mouth to the Korean border...
).

In 1850, he was appointed governor of Kamchatka and the commander of the port of Petropavlovsk
Petropavlovsk-Kamchatsky
Petropavlovsk-Kamchatsky is the main city and the administrative, industrial, scientific, and cultural center of Kamchatka Krai, Russia. Population: .-History:It was founded by Danish navigator Vitus Bering, in the service of the Russian Navy...
.
Under Zavoyko's governorship, Kamchatka expanded to include a wharf
Wharf
A wharf or quay is a structure on the shore of a harbor where ships may dock to load and unload cargo or passengers.Such a structure includes one or more berths , and may also include piers, warehouses, or other facilities necessary for handling the ships.A wharf commonly comprises a fixed...
, foundry
Foundry
A foundry is a factory that produces metal castings. Metals are cast into shapes by melting them into a liquid, pouring the metal in a mold, and removing the mold material or casting after the metal has solidified as it cools. The most common metals processed are aluminum and cast iron...
, and a new army barracks
Barracks
Barracks are specialised buildings for permanent military accommodation; the word may apply to separate housing blocks or to complete complexes. Their main object is to separate soldiers from the civilian population and reinforce discipline, training and esprit de corps. They were sometimes called...
. Zavoyko also encouraged agricultural expansion, urging each household to sustain itself with potato
Potato
The potato is a starchy, tuberous crop from the perennial Solanum tuberosum of the Solanaceae family . The word potato may refer to the plant itself as well as the edible tuber. In the region of the Andes, there are some other closely related cultivated potato species...
farming. These efforts, however, did little to improve the region's low economic and cultural standards.

In 1854, during the Crimean War
Crimean War
The Crimean War was a conflict fought between the Russian Empire and an alliance of the French Empire, the British Empire, the Ottoman Empire, and the Kingdom of Sardinia. The war was part of a long-running contest between the major European powers for influence over territories of the declining...
, Zavoyko led the successful defence against the Siege of Petropavlovsk
Siege of Petropavlovsk
The Siege of Petropavlovsk was the main operation on the Pacific Theatre of the Crimean War. The Russian casualties are estimated at 100 soldiers; the Allies lost five times as many....
by the allied British
United Kingdom
The United Kingdom of Great Britain and Northern IrelandIn the United Kingdom and Dependencies, other languages have been officially recognised as legitimate autochthonous languages under the European Charter for Regional or Minority Languages...
-French
France
The French Republic , The French Republic , The French Republic , (commonly known as France , is a unitary semi-presidential republic in Western Europe with several overseas territories and islands located on other continents and in the Indian, Pacific, and Atlantic oceans. Metropolitan France...
troops commanded by Rear Admirals David Price
David Price
-Military:*David Price , East India Company officer and orientalist*David Price , British Rear Admiral at the Siege of Petropavlovsk- Politics :...
and Fevrier de Point. Zavoyko managed to repel the superior allied forces and even captured the British banner.