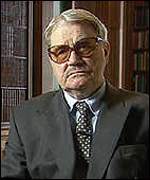 Vasili Nikitich Mitrokhin (March 3, 1922–January 23, 2004) was a Major
Major
Major is a rank of commissioned officer, with corresponding ranks existing in almost every military in the world.When used unhyphenated, in conjunction with no other indicator of rank, the term refers to the rank just senior to that of an Army captain and just below the rank of lieutenant colonel. ...
and senior archivist
Archivist
An archivist is a professional who assesses, collects, organizes, preserves, maintains control over, and provides access to information determined to have long-term value. The information maintained by an archivist can be any form of media...
for the Soviet Union
Soviet Union
The Soviet Union , officially the Union of Soviet Socialist Republics , was a constitutionally socialist state that existed in Eurasia between 1922 and 1991....
's foreign intelligence service, the First Chief Directorate
First Chief Directorate
The First Chief Directorate , of the Committee for State Security , was the organization responsible for foreign operations and intelligence collection activities by the training and management of the covert agents, intelligence collection management, and the collection of political, scientific and...
of the KGB
KGB
The KGB was the commonly used acronym for the . It was the national security agency of the Soviet Union from 1954 until 1991, and was the premier internal security, intelligence, and secret police organization during that time.The State Security Agency of the Republic of Belarus currently uses the...
, and co-author with Christopher Andrew of The Mitrokhin Archive: The KGB in Europe and the West, a massive account of Soviet intelligence operations based on copies of material from the archive. The second volume, The Mitrokhin Archive II: The KGB in the World, was published in 2005, soon after Mitrokhin's death.

Mitrokhin was born in Yurasovo, in Central Russia, Ryazan Oblast
Ryazan Oblast
Ryazan Oblast is a federal subject of Russia . Its administrative center is the city of Ryazan, which is the oblast's largest city. Population: -Geography:...
, Russian Soviet Federative Socialist Republic
Russian Soviet Federative Socialist Republic
The Russian Soviet Federative Socialist Republic , commonly referred to as Soviet Russia, Bolshevik Russia, or simply Russia, was the largest, most populous and economically developed republic in the former Soviet Union....
. After leaving school, he entered artillery school, then attended university in Kazakh SSR
Kazakh SSR
The Kazakh Soviet Socialist Republic , also known as the Kazakh SSR for short, was one of republics that made up the Soviet Union.At in area, it was the second largest constituent republic in the USSR, after the Russian SFSR. Its capital was Alma-Ata . Today it is the independent state of...
, graduating with degrees in history and law.

Towards the end of the second World War
World War II
World War II, or the Second World War , was a global conflict lasting from 1939 to 1945, involving most of the world's nations—including all of the great powers—eventually forming two opposing military alliances: the Allies and the Axis...
, Mitrokhin took a job in the military procurator's office at Kharkov in the Ukrainian SSR
Ukrainian SSR
The Ukrainian Soviet Socialist Republic or in short, the Ukrainian SSR was a sovereign Soviet Socialist state and one of the fifteen constituent republics of the Soviet Union lasting from its inception in 1922 to the breakup in 1991...
. He entered the MGB
Ministry for State Security (USSR)
The Ministry of State Security was the name of Soviet secret police from 1946 to 1953.-Origins of the MGB:The MGB was just one of many incarnations of the Soviet State Security apparatus. Since the revolution, the Bolsheviks relied on a strong political police or security force to support and...
as a foreign intelligence officer in 1948. His first foreign posting was in 1952.

During the 1950s he served on various undercover assignments overseas. In 1956, for example, he accompanied the Soviet team to the Olympic games
Olympic Games
The Olympic Games is a major international event featuring summer and winter sports, in which thousands of athletes participate in a variety of competitions. The Olympic Games have come to be regarded as the world’s foremost sports competition where more than 200 nations participate...
in Australia
Australia
Australia , officially the Commonwealth of Australia, is a country in the Southern Hemisphere comprising the mainland of the Australian continent, the island of Tasmania, and numerous smaller islands in the Indian and Pacific Oceans. It is the world's sixth-largest country by total area...
. But later that year, after he had apparently mishandled an operational assignment, he was moved from operational duties to the archives of the KGB's First Chief Directorate, and told he would never work in the field again.

Mitrokhin sometimes dated the beginnings of his disillusionment to Nikita Khrushchev's famous speech
On the Personality Cult and its Consequences
On the Personality Cult and its Consequences was a report, critical of Joseph Stalin, made to the Twentieth Party Congress on February 25, 1956 by Soviet leader Nikita Khrushchev. It is more commonly known as the Secret Speech or the Khrushchev Report...
to the Communist Party of the Soviet Union
Communist Party of the Soviet Union
The Communist Party of the Soviet Union was the only legal, ruling political party in the Soviet Union and one of the largest communist organizations in the world...
congress denouncing Joseph Stalin
Joseph Stalin
Joseph Vissarionovich Stalin was the Premier of the Soviet Union from 6 May 1941 to 5 March 1953. He was among the Bolshevik revolutionaries who brought about the October Revolution and had held the position of first General Secretary of the Communist Party of the Soviet Union's Central Committee...
, though it seems he may have been harbouring doubts for some time before that. For years he had listened to broadcasts on the BBC
BBC
The British Broadcasting Corporation is a British public service broadcaster. Its headquarters is at Broadcasting House in the City of Westminster, London. It is the largest broadcaster in the world, with about 23,000 staff...
and Voice of America
Voice of America
Voice of America is the official external broadcast institution of the United States federal government. It is one of five civilian U.S. international broadcasters working under the umbrella of the Broadcasting Board of Governors . VOA provides a wide range of programming for broadcast on radio...
, noting the gulf between their reports and party propaganda
Propaganda
Propaganda is a form of communication that is aimed at influencing the attitude of a community toward some cause or position so as to benefit oneself or one's group....
.

Yet when he began looking into the archives, he claimed to have been shocked by what he discovered about the KGB's systematic repression
Soviet political repressions
Throughout the history of the Soviet Union millions of people became victims of political repression, which was an instrument of the state since the October Revolution...
of the Soviet people. "I could not believe such evil," he recalled. "It was all planned, prepared, thought out in advance. It was a terrible shock when I read things."

Between 1972 and 1984 he supervised the move of the archive of the First Chief Directorate from the Lubyanka
Lubyanka (KGB)
The Lubyanka is the popular name for the headquarters of the KGB and affiliated prison on Lubyanka Square in Moscow. It is a large building with a facade of yellow brick, designed by Alexander V...
to the new KGB headquarters at Yasenevo
Yasenevo
Yasenevo is a station on the Kaluzhsko-Rizhskaya Line of the Moscow Metro. It was designed by N. Shumakov, G. Mun, and N. Shurygina and opened on 17 January 1990. Yasenevo has round, greenish marble columns and walls faced with yellowish metallic tile and pink marble...
. While doing so he made copies and immensely detailed notes of documents from the archive. He retired in 1985.

In the Soviet era Mitrokhin made no attempts to contact any western intelligence service. After the dissolution of the Soviet Union
Dissolution of the Soviet Union
The dissolution of the Soviet Union was the disintegration of the federal political structures and central government of the Union of Soviet Socialist Republics , resulting in the independence of all fifteen republics of the Soviet Union between March 11, 1990 and December 25, 1991...
(in 1992) he traveled to Latvia
Latvia
Latvia , officially the Republic of Latvia , is a country in the Baltic region of Northern Europe. It is bordered to the north by Estonia , to the south by Lithuania , to the east by the Russian Federation , to the southeast by Belarus and shares maritime borders to the west with Sweden...
with copies of material from the archive and walked into the American embassy in Riga. Central Intelligence Agency
Central Intelligence Agency
The Central Intelligence Agency is a civilian intelligence agency of the United States government. It is an executive agency and reports directly to the Director of National Intelligence, responsible for providing national security intelligence assessment to senior United States policymakers...
officers there did not consider him to be credible, concluding that the copied documents could be faked. He then went to the British
United Kingdom
The United Kingdom of Great Britain and Northern IrelandIn the United Kingdom and Dependencies, other languages have been officially recognised as legitimate autochthonous languages under the European Charter for Regional or Minority Languages...
embassy and a young diplomat there saw his potential and after a further appointment one month later with representatives of the Secret Intelligence Service (MI6) operations followed to retrieve the 25,000 pages of files hidden in his house, covering operations from as far back as the 1930s. He and his family were then exfiltrated to Britain, although authorities of Yeltsin's Russia were not creating any obstacles for free traveling abroad of active or retired members of secret services or members of their families.

Richard Tomlinson
Richard Tomlinson
Richard Tomlinson is a New Zealand-born British former MI6 officer who was imprisoned during 1997 for violating the Official Secrets Act 1989 by giving the synopsis of a proposed book detailing his career in the Secret Intelligence Service to an Australian publisher...
, the MI6 officer imprisoned in 1997 for attempting to publish a book about his career, was one of those involved in retrieving the documents from containers hidden under the floor of the dacha
Dacha
Dacha is a Russian word for seasonal or year-round second homes often located in the exurbs of Soviet and post-Soviet cities. Cottages or shacks serving as family's main or only home are not considered dachas, although many purpose-built dachas are recently being converted for year-round residence...
.