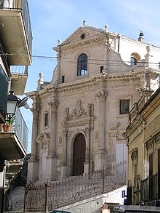 Encyclopedia
Val di Noto is a geographical area of south east Sicily
Sicily
Sicily is a region of Italy, and is the largest island in the Mediterranean Sea. Along with the surrounding minor islands, it constitutes an autonomous region of Italy, the Regione Autonoma Siciliana Sicily has a rich and unique culture, especially with regard to the arts, music, literature,...
; it is dominated by the limestone
Limestone
Limestone is a sedimentary rock composed largely of the minerals calcite and aragonite, which are different crystal forms of calcium carbonate . Many limestones are composed from skeletal fragments of marine organisms such as coral or foraminifera....
Iblean
Hyblaean Mountains
The Hyblaean Mountains are a mountain range in south-eastern Sicily, Italy. They are included in the provinces of Ragusa, Syracuse and Catania, and reaches the highest altitude with Monte Lauro, at 986 m.-Geology:...
plateau
Plateau
In geology and earth science, a plateau , also called a high plain or tableland, is an area of highland, usually consisting of relatively flat terrain. A highly eroded plateau is called a dissected plateau...
.


The Val di Noto in the Arts 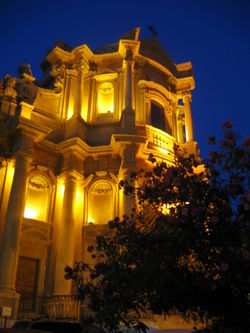 The Val di Noto owes its fame to the reconstruction which underwent after the year 1693, when the entire area was decimated by an enormous earthquake
1693 Sicily earthquake
The 1693 Sicily earthquake refers to a powerful earthquake that struck parts of southern Italy, notably Sicily, Calabria and Malta on January 11, 1693 around 9 pm local time. This earthquake was preceded by a damaging foreshock on January 9th...
. Following the earthquake, many towns were rebuilt on entirely new sites, such as Noto
Noto
Noto is a city and comune in the Province of Syracuse, Sicily . Its located 32 km southwest of the city of Syracuse at the foot of the Iblean Mountains and gives its name to the surrounding valley, Val di Noto...
and Grammichele
Grammichele
Grammichele ; Latin: Echetla; Medieval: Occhiolà) is a town and comune in the province of Catania in Sicily, southern Italy. It is located at the feet of the Hyblaean Mountains, some 13 km from Caltagirone.-History:...
. The rulers of the time, the kings of Spain, accounted the nobleman Giuseppe Lanza
Giuseppe Lanza
Giuseppe Lanza, Duke of Camastra, was a 17th century Sicilian nobleman who oversaw the reconstruction of many Sicilian towns and cities following the earthquake of 1693.He was created 1st Duke of Camastra, and Prince of Santo Stefano...
with special powers, which allowed him to redesign the damaged towns based on rational and scenographic town plans.

In fact, since the beginning of the Renaissance, architects had the dream to build an entirely new ideal city, where town planning follows rational design and streets and buildings are organized by functionality and beauty. However, only a very small part of their projects were really used, and most of them were limited to the reorganization of a street, like the Strada Nuova in Florence
Florence
Florence is the capital city of the Italian region of Tuscany and of the province of Florence. It is the most populous city in Tuscany, with approximately 370,000 inhabitants, expanding to over 1.5 million in the metropolitan area....
or the redesign of small villages, like the town of Pienza
Pienza
Pienza, a town and comune in the province of Siena, in the Val d'Orcia in Tuscany , between the towns of Montepulciano and Montalcino, is the "touchstone of Renaissance urbanism."...
.

The earthquake gave the architects the chance to carry out those plans on a large scale. These new towns and cities were therefore redesigned according to renaissance and baroque town planning, with streets crossing each other either in a right angle or starting from major urban sites like squares with a radial pattern. Major buildings like churches, cloisters and palaces were built in order to give the streets a focal point and a majestic perspective.
Many of these towns had a distinct shape, like the town of Grammichele
Grammichele
Grammichele ; Latin: Echetla; Medieval: Occhiolà) is a town and comune in the province of Catania in Sicily, southern Italy. It is located at the feet of the Hyblaean Mountains, some 13 km from Caltagirone.-History:...
which is based on a hexagon whose centre is the town square, consisting of the parish and town hall.

Another feature is the homogeneous structure of these towns, as the late baroque style developed in Sicily was extensively used in the rebuilding.

The area's towns were rebuilt in what came to be known as the Sicilian Baroque
Sicilian Baroque
Sicilian Baroque is the distinctive form of Baroque architecture that took hold on the island of Sicily, off the southern coast of Italy, in the 17th and 18th centuries...
style; most notable the town of Noto itself, which is now a tourist attraction on account of its fine Baroque
Baroque
The Baroque is a period and the style that used exaggerated motion and clear, easily interpreted detail to produce drama, tension, exuberance, and grandeur in sculpture, painting, literature, dance, and music...
architecture.

The ancient town of Akrai (Palazzolo Acreide) was founded in 664 BCE: it was the first colony of the Corinth
Corinth
Corinth is a city and former municipality in Corinthia, Peloponnese, Greece. Since the 2011 local government reform it is part of the municipality Corinth, of which it is the seat and a municipal unit...
ian settlement at Syracuse
Syracuse, Italy
Syracuse is a historic city in Sicily, the capital of the province of Syracuse. The city is notable for its rich Greek history, culture, amphitheatres, architecture, and as the birthplace of the preeminent mathematician and engineer Archimedes. This 2,700-year-old city played a key role in...
. The Syracusans steadily expanded their power over the Sicilian interior. Scarcely recorded, the ruined town was rediscovered by the historian Tommaso Fazello
Tommaso Fazello
Tommaso Fazello was an Italian Dominican friar, historian and antiquarian. He is known as the father of Sicilian history. He is the author of the first printed history of Sicily: De Rebus Siculis Decades Duae, published in Palermo in 1558 in Latin...
at the end of 16th century. Further excavations in the early 19th century by Baron Gabriele Iudica, unearthed important facts concerning the early history of eastern Sicily.

In June 2002, UNESCO
UNESCO
The United Nations Educational, Scientific and Cultural Organization is a specialized agency of the United Nations...
inscribed eight old towns of the Val di Noto on the World Heritage List as "representing the culmination and final flowering of Baroque
Baroque
The Baroque is a period and the style that used exaggerated motion and clear, easily interpreted detail to produce drama, tension, exuberance, and grandeur in sculpture, painting, literature, dance, and music...
art in Europe". The listed towns are Caltagirone
Caltagirone
Caltagirone is a town and comune in the province of Catania, on the island of Sicily, about 70 km southwest of Catania. It is bounded by the comuni of Acate, Gela, Grammichele, Licodia Eubea, Mazzarino, Mazzarrone, Mineo, Mirabella Imbaccari, Niscemi, Piazza Armerina, San Michele di...
, Militello in Val di Catania
Militello in Val di Catania
-External links:*...
, Catania
Catania
Catania is an Italian city on the east coast of Sicily facing the Ionian Sea, between Messina and Syracuse. It is the capital of the homonymous province, and with 298,957 inhabitants it is the second-largest city in Sicily and the tenth in Italy.Catania is known to have a seismic history and...
, Modica
Modica
-External links:*...
, Noto
Noto
Noto is a city and comune in the Province of Syracuse, Sicily . Its located 32 km southwest of the city of Syracuse at the foot of the Iblean Mountains and gives its name to the surrounding valley, Val di Noto...
, Palazzolo Acreide, Ragusa
Ragusa, Italy
Ragusa is a city and comune in southern Italy. It is the capital of the province of Ragusa, on the island of Sicily, with around 75,000 inhabitants. It is built on a wide limestone hill between two deep valleys, Cava San Leonardo and Cava Santa Domenica...
, and Scicli
Scicli
*...
.
The source of this article is wikipedia, the free encyclopedia.  The text of this article is licensed under the GFDL.