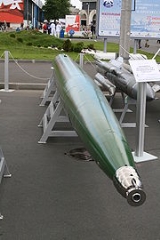 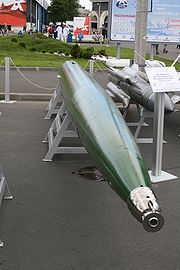 The VA-111 Shkval torpedo
Torpedo
The modern torpedo is a self-propelled missile weapon with an explosive warhead, launched above or below the water surface, propelled underwater towards a target, and designed to detonate either on contact with it or in proximity to it.The term torpedo was originally employed for...
and its descendants are supercavitating
Supercavitation
Supercavitation is the use of cavitation effects to create a bubble of gas inside a liquid large enough to encompass an object traveling through the liquid, greatly reducing the skin friction drag on the object and enabling achievement of very high speeds...
torpedoes developed by the Soviet Union
Soviet Union
The Soviet Union , officially the Union of Soviet Socialist Republics , was a constitutionally socialist state that existed in Eurasia between 1922 and 1991....
. They are capable of speeds in excess of 200 knots (370 km/h).

Design began in the 1960s when the NII-24 research institute was ordered to produce a new weapon system capable of combating nuclear submarine
Nuclear submarine
A nuclear submarine is a submarine powered by a nuclear reactor . The performance advantages of nuclear submarines over "conventional" submarines are considerable: nuclear propulsion, being completely independent of air, frees the submarine from the need to surface frequently, as is necessary for...
s. In 1969, the GSKB-47 merged with NII-24 to create the Research Institute of Applied Hydromechanics in Kiev, Ukraine (constructor Merkulov); the Shkval being a product of this merger.

Announced as being deployed in the early 1990s, although previously operational as early as 1977, the Shkval is designed as a countermeasure against torpedoes launched by undetected enemy submarines. It may also be used as a counter to incoming torpedoes whereby it is launched at the enemy submarine, forcing it to evade, and hopefully cutting the guidance wire to its own torpedo in the process.

The speed of the VA-111 far exceeds that of any standard torpedo currently fielded by NATO. This speed is a result of supercavitation
Supercavitation
Supercavitation is the use of cavitation effects to create a bubble of gas inside a liquid large enough to encompass an object traveling through the liquid, greatly reducing the skin friction drag on the object and enabling achievement of very high speeds...
: the torpedo is, in effect, flying in a gas bubble created by outward deflection of water by its specially shaped nose cone
Nose cone
The term nose cone is used to refer to the forwardmost section of a rocket, guided missile or aircraft. The cone is shaped to offer minimum aerodynamic resistance...
and the expansion of gases from its engine. By keeping water from coming into contact with the surface of the body of the torpedo, drag
Drag (physics)
In fluid dynamics, drag refers to forces which act on a solid object in the direction of the relative fluid flow velocity...
is significantly reduced, allowing extremely high speeds.

Launched from 533 mm torpedo tube
Torpedo tube
A torpedo tube is a device for launching torpedoes. There are two main types of torpedo tube: underwater tubes fitted to submarines and some surface ships, and deck-mounted units installed aboard surface vessels...
s, the VA-111 exits the tube at 50 knots (98 km/h). Shortly afterwards, its liquid-fuel rocket ignites and propels it to speeds of up to 200 knots (392 km/h). Some reports indicate that speeds of 250+ knots may be achieved, and that work on a 300 knots (588 km/h) version was underway. The rocket engine uses the combination of high test peroxide
High test peroxide
High-test peroxide or HTP is a high -concentration solution of hydrogen peroxide, with the remainder predominantly made up of water. In contact with a catalyst, it decomposes into a high-temperature mixture of steam and oxygen, with no remaining liquid water...
and kerosene
Kerosene
Kerosene, sometimes spelled kerosine in scientific and industrial usage, also known as paraffin or paraffin oil in the United Kingdom, Hong Kong, Ireland and South Africa, is a combustible hydrocarbon liquid. The name is derived from Greek keros...
; the propellant tanks contain about 1.5 tonnes of hydrogen peroxide and 500 kg of kerosene.

Early designs may have relied solely on an inertial guidance system. The initial design was intended for nuclear warhead delivery. Later designs reportedly include terminal guidance and conventional warhead
Warhead
The term warhead refers to the explosive material and detonator that is delivered by a missile, rocket, or torpedo.- Etymology :During the early development of naval torpedoes, they could be equipped with an inert payload that was intended for use during training, test firing and exercises. This...
s of 210 kg (463 lb).

The missile controls its direction using four fins that skim the inner surface of the supercavitation envelope. To change direction, the fin or fins on the inside of the desired turn are extended, and the opposing fins are retracted. To make faster turns, (as seen in the images) the push plate on the nose can be used to control the shape of the bubble the missile is traveling in.

These missiles can be deployed in a drum containing six vertically placed missiles as well as a central guidance system to act as a deep sea mine
Naval mine
A naval mine is a self-contained explosive device placed in water to destroy surface ships or submarines. Unlike depth charges, mines are deposited and left to wait until they are triggered by the approach of, or contact with, an enemy vessel...
of the PMK-2 type.

There are at least three variants:

All current versions are believed to be fitted only with conventional explosive
Explosive material
An explosive material, also called an explosive, is a reactive substance that contains a great amount of potential energy that can produce an explosion if released suddenly, usually accompanied by the production of light, heat, sound, and pressure...
warheads, although the original design used a nuclear warhead.

In 2000, former U.S. Naval intelligence officer Edmond Pope (Captain, USN, retired) was held, tried, and convicted of espionage related to information he obtained about the Shkval weapon system. Russian President Vladimir Putin
Vladimir Putin
Vladimir Vladimirovich Putin served as the second President of the Russian Federation and is the current Prime Minister of Russia, as well as chairman of United Russia and Chairman of the Council of Ministers of the Union of Russia and Belarus. He became acting President on 31 December 1999, when...
pardoned Pope in December 2000, allegedly on humanitarian grounds because he had bone cancer.