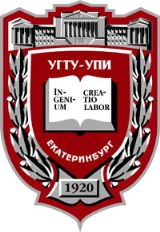 Encyclopedia
Ural State Technical University (USTU) is a higher education
Higher education
Higher, post-secondary, tertiary, or third level education refers to the stage of learning that occurs at universities, academies, colleges, seminaries, and institutes of technology...
institute
University
A university is an institution of higher education and research, which grants academic degrees in a variety of subjects. A university is an organisation that provides both undergraduate education and postgraduate education...
in Yekaterinburg
Yekaterinburg
Yekaterinburg is a major city in the central part of Russia, the administrative center of Sverdlovsk Oblast. Situated on the eastern side of the Ural mountain range, it is the main industrial and cultural center of the Urals Federal District with a population of 1,350,136 , making it Russia's...
, Sverdlovsk Oblast
Sverdlovsk Oblast
Sverdlovsk Oblast is a federal subject of Russia located in the Urals Federal District. Its administrative center is the city of Yekaterinburg formerly known as Sverdlovsk. Population: -Geography:...
, Russian Federation. It is the biggest technical institution of higher education in Russia, with close ties to local industry in the Urals
Ural Mountains
The Ural Mountains , or simply the Urals, are a mountain range that runs approximately from north to south through western Russia, from the coast of the Arctic Ocean to the Ural River and northwestern Kazakhstan. Their eastern side is usually considered the natural boundary between Europe and Asia...
. Its motto, Ingenium Creatio Labor, means "brilliance creates work".

USTU was founded in 1920. It was formerly known as Ural Polytechnic Institute.

The school has rapidly expanded due to the industrialization program of the Soviet
Soviet Union
The Soviet Union , officially the Union of Soviet Socialist Republics , was a constitutionally socialist state that existed in Eurasia between 1922 and 1991....
Government, which created a high demand for engineering
Engineering
Engineering is the discipline, art, skill and profession of acquiring and applying scientific, mathematical, economic, social, and practical knowledge, in order to design and build structures, machines, devices, systems, materials and processes that safely realize improvements to the lives of...
positions. The USTU was key in providing local industrial enterprises with technical and engineering staff.

In the 1940s, though suffering from a shortage of personnel due to World War II
World War II
World War II, or the Second World War , was a global conflict lasting from 1939 to 1945, involving most of the world's nations—including all of the great powers—eventually forming two opposing military alliances: the Allies and the Axis...
, the USTU received a great stimulus for development as the military needed to increase production for new industrial goods from the plants in the Urals. It is noteworthy that many industrial plants were moved to the Urals due to the partial occupation of Western Russia by Nazi
Nazi Germany
Nazi Germany , also known as the Third Reich , but officially called German Reich from 1933 to 1943 and Greater German Reich from 26 June 1943 onward, is the name commonly used to refer to the state of Germany from 1933 to 1945, when it was a totalitarian dictatorship ruled by...
military forces.

After the war, the USTU has kept close ties with the military industry, mostly by preparing a large amount of engineers for military purposes.

With the growth of Soviet Economy, the USTU kept expanding. In 1991, however, due to the economical crisis following the collapse of the Soviet Union, it suffered from acute underfunding by the Russian Government. It was not until mid-1990s that the USTU began to find appreciable non-governmental sources of funding, mostly by means of establishing business ties with local industrial enterprises that survived or arose as result of the economical crisis.

In April 2008 it was named after Boris Yeltsin
Boris Yeltsin
Boris Nikolayevich Yeltsin was the first President of the Russian Federation, serving from 1991 to 1999.Originally a supporter of Mikhail Gorbachev, Yeltsin emerged under the perestroika reforms as one of Gorbachev's most powerful political opponents. On 29 May 1990 he was elected the chairman of...
- Yeltsin Ural State Technical University.