Encyclopedia
The University of Greenwich is a British university located in the London Borough of Greenwich
London Borough of Greenwich
The London Borough of Greenwich is an Inner London borough in south-east London, England. Taking its name from the historic town of Greenwich, the present borough was formed in 1965 by the amalgamation of the former area of the Metropolitan Borough of Greenwich with part of the Metropolitan...
, London
London
London is the capital city of :England and the :United Kingdom, the largest metropolitan area in the United Kingdom, and the largest urban zone in the European Union by most measures. Located on the River Thames, London has been a major settlement for two millennia, its history going back to its...
, England
England
England is a country that is part of the United Kingdom. It shares land borders with Scotland to the north and Wales to the west; the Irish Sea is to the north west, the Celtic Sea to the south west, with the North Sea to the east and the English Channel to the south separating it from continental...
. The main campus is located on the grounds of the Old Royal Naval College
Old Royal Naval College
The Old Royal Naval College is the architectural centrepiece of Maritime Greenwich, a World Heritage Site in Greenwich, London, described by the United Nations Educational, Scientific and Cultural Organisation as being of “outstanding universal value” and reckoned to be the “finest and most...
, a central location within the Maritime Greenwich UNESCO World Heritage Site
World Heritage Site
A UNESCO World Heritage Site is a place that is listed by the UNESCO as of special cultural or physical significance...
. 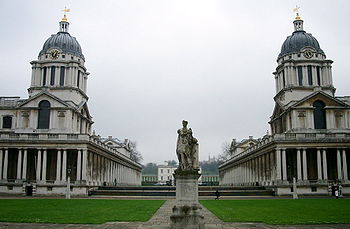 The history of the University dates back to 1890, when Woolwich Polytechnic was founded as the second-oldest Polytechnic of the United Kingdom. In 1970, Woolwich Polytechnic merged with various other higher education institutions to form Thames Polytechnic. In the following years, Dartford College (1976), Avery Hill College (1985), Garnett College
Garnett College
Garnett College was a higher education college in London specialising in further and higher education lecturer training by offering training for lecturers in further and higher education colleges. Its main focus was on teaching towards post-graduate qualifications awarded by the Council for...
(1987) and parts of Goldsmiths College
Goldsmiths College
Goldsmiths, University of London is a public research university located in London, United Kingdom which specialises in the arts, humanities and social sciences, and a constituent college of the federal University of London. It was founded in 1891 as Goldsmiths' Technical and Recreative Institute...
and the City of London College (1988) were incorporated, extending considerably the range of subjects taught.

In 1992, the century-old Thames Polytechnic was granted university status by the Major
John Major
Sir John Major, is a British Conservative politician, who served as Prime Minister of the United Kingdom and Leader of the Conservative Party from 1990–1997...
government (together with various other polytechnics) and renamed University of Greenwich. Traditionally, the institution has focused on engineering, mathematics, computing and natural science. In recent decades, its Business School has become a particular strength.

Since the 19th century, the University has expanded from a technical institution to teach a range of subjects across engineering, natural sciences, social sciences, humanities and business. Its research focus is applied science with strong links to the scientific community.

Since 2004, it has been run by Vice Chancellor Tessa Blackstone. Blackstone, a Labour life peer
Life peer
In the United Kingdom, life peers are appointed members of the Peerage whose titles cannot be inherited. Nowadays life peerages, always of baronial rank, are created under the Life Peerages Act 1958 and entitle the holders to seats in the House of Lords, presuming they meet qualifications such as...
, who was previously Master of Birkbeck College. She served as Minister for Education (1997–2001) and Minister for Arts (2001–2003) of the United Kingdom under the Labour government. She took her Ph.D at the London School of Economics before becoming the Professor of Educational Administration at University of London Institute of Education. Under her leadership, several world-class professors had been recruited by the University of Greenwich.

Among its prominent alumni are Nobel Laureate Charles Kao, former British Minister for Transport Richard Marsh
Richard Marsh, Baron Marsh
Richard William Marsh, Baron Marsh PC was an English politician and business executive.Marsh was educated at Woolwich Polytechnic and was elected as Labour Party Member of Parliament for Greenwich at the 1959 general election...
, former British Minister of State Gareth Thomas
Gareth Thomas (English politician)
Gareth Richard Thomas is a British Labour Co-operative politician, who has been the Member of Parliament for Harrow West since 1997...
, and business leader George Rose
George Rose (businessman)
George Rose is a British businessman.He joined British Aerospace in 1992 and continues to serve on the board of its successor, BAE Systems, as finance director...
, among numerous others.

The University of Greenwich is ranked 99 out of 119 institutions according to the Guardian University Guide 2012 University League Table.

The Complete University Guide rank Greenwich 109 out of 116 in their University League Table 2012 .

The University won the Queen's Anniversary Prizes for Higher and Further Education in 2008. It also has links with further education
Further education
Further education is a term mainly used in connection with education in the United Kingdom and Ireland. It is post-compulsory education , that is distinct from the education offered in universities...
colleges in the Thames Gateway
Thames Gateway
The Thames Gateway is an area of land stretching east from inner east London on both sides of the River Thames and the Thames Estuary. The area, which includes much brownfield land, has been designated a national priority for urban regeneration, taking advantage of the development opportunities...
area, including Bexley College and North West Kent College, and plays a regional role in training teacher
Teacher
A teacher or schoolteacher is a person who provides education for pupils and students . The role of teacher is often formal and ongoing, carried out at a school or other place of formal education. In many countries, a person who wishes to become a teacher must first obtain specified professional...
s, nurses and social care professionals. In addition, since taking over the UKs only specialist lecturer training college (Garnett College
Garnett College
Garnett College was a higher education college in London specialising in further and higher education lecturer training by offering training for lecturers in further and higher education colleges. Its main focus was on teaching towards post-graduate qualifications awarded by the Council for...
) it has become a major centre for training further education lecturers. It also includes Greenwich Maritime Institute, a freestanding department in the university with links in the maritime business community, teaching maritime policy and management and maritime history. the

In March 2005 it was announced that Greenwich would be one of three British universities charging less than the £3000-per-year limit to be introduced from academic year 2006. After consultation with students, Greenwich will charge £2,500 for its undergraduate courses. Vice-chancellor Baroness Blackstone said this was "a reflection of our wish to attract students from a wide range of backgrounds".

Greenwich also houses research and consultancy in architecture
Architecture
Architecture is both the process and product of planning, designing and construction. Architectural works, in the material form of buildings, are often perceived as cultural and political symbols and as works of art...
, landscape architecture
Landscape architecture
Landscape architecture is the design of outdoor and public spaces to achieve environmental, socio-behavioral, or aesthetic outcomes. It involves the systematic investigation of existing social, ecological, and geological conditions and processes in the landscape, and the design of interventions...
, employment relations, fire safety
Fire safety
Fire safety refers to precautions that are taken to prevent or reduce the likelihood of a fire that may result in death, injury, or property damage, alert those in a structure to the presence of a fire in the event one occurs, better enable those threatened by a fire to survive, or to reduce the...
, natural resources, social network analysis, education
Education
Education in its broadest, general sense is the means through which the aims and habits of a group of people lives on from one generation to the next. Generally, it occurs through any experience that has a formative effect on the way one thinks, feels, or acts...
, training
Training
The term training refers to the acquisition of knowledge, skills, and competencies as a result of the teaching of vocational or practical skills and knowledge that relate to specific useful competencies. It forms the core of apprenticeships and provides the backbone of content at institutes of...
, educational leadership and public services
Public services
Public services is a term usually used to mean services provided by government to its citizens, either directly or by financing private provision of services. The term is associated with a social consensus that certain services should be available to all, regardless of income...
. The University of Greenwich has established research partnerships with the European Space Agency and the large pharmaceutical companies. Support comes as well from the Indian government and Saudi Arabia's Ministry of Education.

The University of Greenwich has recently established the Institute of Converging Arts and Sciences, directed by Professor Sue Golding
Sue Golding
Sue Golding is a philosopher and artist. She is Professor of Philosophy in the Visual Arts & Communication Technologies at the University of Greenwich where she is also the Director of ICAS, the Institute for the Converging Arts & Sciences. Previously she was Head of Theory at the Jan Van Eyck...
, to examine the development of digital technology, its aesthetics and philosophy. The inaugural conference of the Institute in October 2009 included a public lecture by Dame Wendy Hall
Wendy Hall
Dame Wendy Hall DBE, FREng, FBCS, FIET, FCGI, FRS is Professor of Computer Science at the University of Southampton, England.- Background :...
. Another research center is the Natural Resources Institute in Medway, Kent.

Bird College
Bird College
Bird College of Dance, Music & Theatre Performance is an independent performing arts school and college, based in the Greater London suburb of Sidcup...
is a specialist dance and performing arts college based in Sidcup, Kent. The University of Greenwich validates its degrees. Graduate destinations include West End
West End theatre
West End theatre is a popular term for mainstream professional theatre staged in the large theatres of London's 'Theatreland', the West End. Along with New York's Broadway theatre, West End theatre is usually considered to represent the highest level of commercial theatre in the English speaking...
and Broadway theatre
Broadway theatre
Broadway theatre, commonly called simply Broadway, refers to theatrical performances presented in one of the 40 professional theatres with 500 or more seats located in the Theatre District centered along Broadway, and in Lincoln Center, in Manhattan in New York City...
, dance companies, music, film and television. The college's founder Doreen Bird
Doreen Bird
Doreen Bird, MA, FISTD, ARAD, was a British dance teacher and founder of the Doreen Bird College of Performing Arts in Sidcup, Kent. She was a fellow, examiner, lecturer, committee and council member of the ISTD, life member of the RAD, and Honorary MA. Prior to her death from Leukaemia in 2004,...
, was awarded an honorary MA by the University in 1999 and Tony Clayton, a former Dean of the University, currently serves as Chairman of the college's Board of Directors.

The Academy of Live and Recorded Arts is a specialist drama college based in Wandsworth, London. Graduate destinations include West End theatre, film and television.

Amongst the alumni of the University of Greenwich (or other institutions that now fall under that banner) are:


Fortune-West, Reynolds and Bedingfield left their courses prior to graduation.