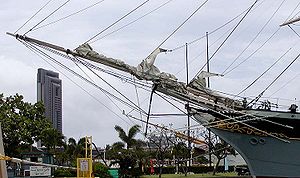 Early ocean-going vessels tended to tilt the bowsprit, known in centuries past also as a boltsprit, at a high angle, and hung one or two square spritsail
Spritsail (square-rigged)
On large sailing ships a spritsail is a square-rigged sail carried on a yard below the bowsprit.In some languages it is known as a "blind", because it effectively blocks forward vision when set....
s from yards. In the 17th century and early 18th century a vertical sprit topmast was added near the end of the bowsprit and another square sail added to it; this was not a particularly successful design however, the mast tending to carry away in heavy weather. Fore-and-aft sails known as jib
Jib
A jib is a triangular staysail set ahead of the foremast of a sailing vessel. Its tack is fixed to the bowsprit, to the bow, or to the deck between the bowsprit and the foremost mast...
s hung from the stays proved more useful for speed and maneuvering, and the basic bowsprit was lengthened with a jibboom and then even further with a flying jibboom, resulting in bowsprits of tremendous length, up to 30 metres total.

On smaller vessels, where the bowsprit is not used for stowing sails, it is often horizontal. Bowsprits are rare on modern yacht
Yacht
A yacht is a recreational boat or ship. The term originated from the Dutch Jacht meaning "hunt". It was originally defined as a light fast sailing vessel used by the Dutch navy to pursue pirates and other transgressors around and into the shallow waters of the Low Countries...
s, the forestay merely running down to the tip of the bow, though they were typical of traditional Bermudian design; the Bermuda rig
Bermuda rig
The term Bermuda rig refers to a configuration of mast and rigging for a type of sailboat and is also known as a Marconi rig; this is the typical configuration for most modern sailboats...
having become the most common yacht rig during the 20th Century. On some modern racing yachts and dinghies
Dinghy
A dinghy is a type of small boat, often carried or towed for use as a ship's boat by a larger vessel. It is a loanword from either Bengali or Urdu. The term can also refer to small racing yachts or recreational open sailing boats. Utility dinghies are usually rowboats or have an outboard motor,...
, the bowsprit is retractable and primarily used to fly an asymmetrical spinnaker.

The very end of the bowsprit is traditionally painted white on tall ship
Tall ship
A tall ship is a large, traditionally-rigged sailing vessel. Popular modern tall ship rigs include topsail schooners, brigantines, brigs and barques. "Tall Ship" can also be defined more specifically by an organization, such as for a race or festival....
s, unless the ship in question has ventured into either the Arctic or Antarctic circles, in which case it is painted blue (i.e. bluenose).

On large tall ship
Tall ship
A tall ship is a large, traditionally-rigged sailing vessel. Popular modern tall ship rigs include topsail schooners, brigantines, brigs and barques. "Tall Ship" can also be defined more specifically by an organization, such as for a race or festival....
s the bowsprit may be a considerable length and have several forestays attached. When not in use the headsail
Headsail
A headsail of a sailing vessel is any sail set forward of the foremost mast. The most common headsails are staysails, a term that includes jibs and the larger genoa...
s are stowed by being tied onto the bowsprit. The crew must then work out on the bowsprit to stow or prepare the sails. To minimise the risk of the bowsprit (and any crew working on it) being buried in large waves, the bowsprit is normally angled upwards from the horizontal.

The bowsprit has an ominous nickname widowmaker; maintaining the headsails upon the bowsprit was very dangerous business, especially on rough or stormy seas.

Some hang gliders use a bowsprit, rather than a spar to spread their wings. The bowsprit is formed by extending the keel tube about a metre beyond the leading edge
Leading edge
The leading edge is the part of the wing that first contacts the air; alternatively it is the foremost edge of an airfoil section. The first is an aerodynamic definition, the second a structural one....
of the wing. In 1879 a patent in England by F. W. Brearey was filed (followed by U.S. patenting in numbers 234947 and 320042) that taught bowsprit structure for flying machines. In the modern mid-1900s renaissance in hang gliding a Dial Soap TV commercial featured in 1973 a bowprit cross-sparless hang glider. Other examples of bowspirt hang gliders were exampled in the gliders manufactured by Bautek in the 1980s.
The source of this article is wikipedia, the free encyclopedia.  The text of this article is licensed under the GFDL.