Encyclopedia
A topsail is a sail
Sail
A sail is any type of surface intended to move a vessel, vehicle or rotor by being placed in a wind—in essence a propulsion wing. Sails are used in sailing.-History of sails:...
set above another sail; on square-rigged vessels further sails may be set above topsails. 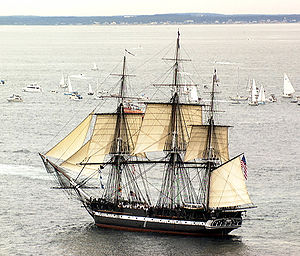 On a square rig
Square rig
Square rig is a generic type of sail and rigging arrangement in which the primary driving sails are carried on horizontal spars which are perpendicular, or square, to the keel of the vessel and to the masts. These spars are called yards and their tips, beyond the last stay, are called the yardarms...
ged vessel, a topsail is a square sail rigged above the course sail
Course (sail)
In sailing, a course is the lowermost sail on a mast.This term is used predominantly in the plural to describe the lowest sails on a square rigged vessel, i.e., a ship's courses would be the foresail, mainsail, and, on the rare occasions in which one is shipped, mizen...
and below the topgallant sail
Topgallant sail
On a square rigged sailing vessel, a topgallant sail is the square-rigged sail or sails immediately above the topsail or topsails. It is also known as a gallant or garrant sail....
where carried. A full rigged ship
Full rigged ship
A full rigged ship or fully rigged ship is a sailing vessel with three or more masts, all of them square rigged. A full rigged ship is said to have a ship rig....
has either single or double ("split" upper and lower) topsails on all masts, the single or lower topsail being the second sail above the deck and the upper topsail where so rigged being the third.

Although described as a "square" sail, this term refers not to a sail's shape but to it and its yard being rigged square to the keel of the vessel rather than in line with it or "fore and aft"; the topsail was and is always trapezoidal, the lengths of the upper yards being progressively smaller the higher they are. The bottom edge (foot) of the topsail, like that of other square sails, is slightly concave, .

Although topsails of a kind were used at least as early as Roman times, they first came into use in Europe some time in the 15th century. Initially small and carried only on main and fore masts, they gradually increased in size and importance until by the middle of the 17th century and were the principal and largest sails of the ship, the first sails to be set and the last to be taken in. It was quite common for a ship to sail with topsails and jib
Jib
A jib is a triangular staysail set ahead of the foremast of a sailing vessel. Its tack is fixed to the bowsprit, to the bow, or to the deck between the bowsprit and the foremost mast...
s alone; the position of the topsails well above the sea ensured that they received a steady breeze even if the seas were rough.

The larger topsails were difficult and dangerous to handle in strong winds. Sometime in the 1680s, reef-bands were introduced to tie up part of the sail, with topsails eventually getting four of these, and reefing
Reefing
Reefing is a sailing manoeuvre intended to reduce the area of a sail on a sailboat or sailing ship, which can improve the ship's stability and reduce the risk of capsizing, broaching, or damaging sails or boat hardware in a strong wind...
the sails became a regular occupation of sailors. In the mid 19th century, topsails of merchant vessels were split into separate upper and lower topsails that could be managed separately and far more easily by smaller crews.

Gaff topsails, like gaff rig
Gaff rig
Gaff rig is a sailing rig in which the sail is four-cornered, fore-and-aft rigged, controlled at its peak and, usually, its entire head by a spar called the gaff...
s in general, may still be seen today but were once more common. The gaff rig has been largely superseded by the bermuda rig
Bermuda rig
The term Bermuda rig refers to a configuration of mast and rigging for a type of sailboat and is also known as a Marconi rig; this is the typical configuration for most modern sailboats...
, which has no topsails. On a gaff rigged sailing boat, topsails may take a few different forms:

A gaff topsail is generally a triangular sail set between the gaff and the top of the mast
Mast (sailing)
The mast of a sailing vessel is a tall, vertical, or near vertical, spar, or arrangement of spars, which supports the sails. Large ships have several masts, with the size and configuration depending on the style of ship...
or topmast
Topmast
The masts of traditional sailing ships were not single spars, but were constructed of separate sections or masts, each with its own rigging. The topmast is one of these.The topmast is semi-permanently attached to the upper front of the lower mast, at the top...
. A gaff-rigged vessel might have a gaff topsail above any or all of its gaff sails.

A yard topsail is like a gaff topsail, but is extended higher by a small vertical yard
Yard (sailing)
A yard is a spar on a mast from which sails are set. It may be constructed of timber, steel, or from more modern materials, like aluminium or carbon fibre. Although some types of fore and aft rigs have yards , the term is usually used to describe the horizontal spars used with square sails...
.

A jack-yard topsail (or Club topsail) instead has its lower edge (or foot) extended out beyond the end of the gaff with a short yard, called a "jack-yard". A jack-yard topsail may also have the aforementioned vertical yard, although this makes for a very large topsail.

A square topsail is a square-rigged sail, generally carried above the foresail
Foresail
A foresail is one of a few different types of sail set on the foremost mast of a sailing vessel:* A fore and aft sail set on the foremast of a schooner or similar vessel....
when on boats with multiple masts. Gaff-rigged vessels carrying square tops are referred to as "square-topsail sloops", "square-topsail schooners", etc. Occasionally this is shortened to simply "topsail sloop" or "topsail schooner", although this term can apply to vessels carrying topsails of any kind.

A raffee is a square-rigged topsail which is triangular in shape.

On rigs having multiple jib
Jib
A jib is a triangular staysail set ahead of the foremast of a sailing vessel. Its tack is fixed to the bowsprit, to the bow, or to the deck between the bowsprit and the foremost mast...
s or staysail
Staysail
A staysail is a fore-and-aft rigged sail whose luff can be affixed to a stay running forward from a mast to the deck, the bowsprit or to another mast....
s of which at least one is set high, such as many late 19th and 20th Century racing cutters, the uppermost of these, set flying or on a topmast stay
Stays (nautical)
Stays are the heavy ropes, wires, or rods on sailing vessels that run from the masts to the hull, usually fore-and-aft along the centerline of the vessel...
, is often called the jib topsail.

Topsails (Greek
Greek language
Greek is an independent branch of the Indo-European family of languages. Native to the southern Balkans, it has the longest documented history of any Indo-European language, spanning 34 centuries of written records. Its writing system has been the Greek alphabet for the majority of its history;...
: sipharos; Latin
Latin
Latin is an Italic language originally spoken in Latium and Ancient Rome. It, along with most European languages, is a descendant of the ancient Proto-Indo-European language. Although it is considered a dead language, a number of scholars and members of the Christian clergy speak it fluently, and...
: siparum) in the form of an isosceles triangle set above the square mainsail
Mainsail
A mainsail is a sail located behind the main mast of a sailing vessel.On a square rigged vessel, it is the lowest and largest sail on the main mast....
were used in Roman
Ancient Rome
Ancient Rome was a thriving civilization that grew on the Italian Peninsula as early as the 8th century BC. Located along the Mediterranean Sea and centered on the city of Rome, it expanded to one of the largest empires in the ancient world....
navigation.
The source of this article is wikipedia, the free encyclopedia.  The text of this article is licensed under the GFDL.