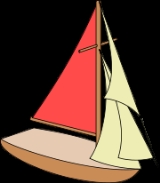 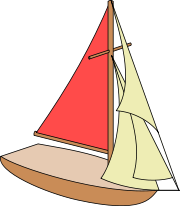 A mainsail is a sail located behind the main mast
Mast (sailing)
The mast of a sailing vessel is a tall, vertical, or near vertical, spar, or arrangement of spars, which supports the sails. Large ships have several masts, with the size and configuration depending on the style of ship...
of a sailing vessel.

On a square rig
Square rig
Square rig is a generic type of sail and rigging arrangement in which the primary driving sails are carried on horizontal spars which are perpendicular, or square, to the keel of the vessel and to the masts. These spars are called yards and their tips, beyond the last stay, are called the yardarms...
ged vessel, it is the lowest and largest sail on the main mast.

The modern Bermuda rig
Bermuda rig
The term Bermuda rig refers to a configuration of mast and rigging for a type of sailboat and is also known as a Marconi rig; this is the typical configuration for most modern sailboats...
uses a triangular mainsail as the only sail aft
Aft
Aft, in naval terminology, is an adjective or adverb meaning, towards the stern of the ship, when the frame of reference is within the ship. Example: "Able Seaman Smith; lay aft!". Or; "What's happening aft?"...
of the mast, closely coordinated with a jib
Jib
A jib is a triangular staysail set ahead of the foremast of a sailing vessel. Its tack is fixed to the bowsprit, to the bow, or to the deck between the bowsprit and the foremost mast...
for sailing upwind. A large overlapping jib or genoa
Genoa (sail)
The genoa or jenny was originally referred to as the 'overlapping jib' or the Genoa jib, being named after the city of Genoa as explained below. It is a type of large jib or staysail used on bermuda rigged craft that overlaps the main sail, sometimes eliminating it. It is used on single-masted...
is often larger than the mainsail. In downwind conditions (with the wind behind the boat) a spinnaker
Spinnaker
A spinnaker is a special type of sail that is designed specifically for sailing off the wind from a reaching course to a downwind, i.e. with the wind 90°–180° off the bow. The spinnaker fills with wind and balloons out in front of the boat when it is deployed, called flying. It is constructed of...
replaces the jib.

Most modern mainsails are "full-batten" mainsails. Batten
Batten
A batten is a thin strip of solid material, typically made from wood, plastic or metal. Battens are used in building construction and various other fields as both structural and purely cosmetic elements...
s enable the mainsail to project farther away from the mast. However, there is some cost associated with the battens themselves, "batten pockets" need to be sewn into the sail, and "batten cars" are needed to allow the sail to be raised and lowered.

Traditional fore-and-aft rigs used a four-sided gaff rig
Gaff rig
Gaff rig is a sailing rig in which the sail is four-cornered, fore-and-aft rigged, controlled at its peak and, usually, its entire head by a spar called the gaff...
ged mainsail, sometimes setting a gaff topsail
Topsail
A topsail is a sail set above another sail; on square-rigged vessels further sails may be set above topsails.- Square rig :On a square rigged vessel, a topsail is a square sail rigged above the course sail and below the topgallant sail where carried...
above it.

A roll mainsail is furled by being rolled
Roller furling
Roller furling is a method of furling or reefing wherein a sail is rolled around a stay or rotating spar. Roller furling is most commonly encountered on foresails, such as jibs, with mainsails a distant second.-Furling methods:...
within (or around) the mast or boom.

Before Nathanael Greene Herreshoff invention of sail tracks and slides in the 1880s, mainsails were limited in height. Traditional mainsails were held against the mast by hoops that went the full way around the mast. This meant a traditional mainsail could be raised no higher than the first point a rope or wire was required to keep the mast upright.
The source of this article is wikipedia, the free encyclopedia.  The text of this article is licensed under the GFDL.