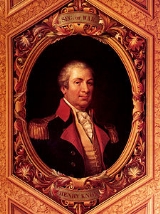 What was an award given to henry knox during the revolutionary war?
More
x