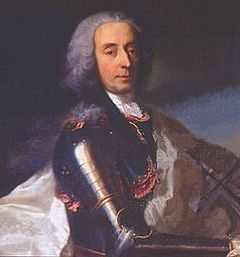 Unico Willem van Wassenaer, Count of the Empire
Holy Roman Empire
The Holy Roman Empire was a realm that existed from 962 to 1806 in Central Europe.It was ruled by the Holy Roman Emperor. Its character changed during the Middle Ages and the Early Modern period, when the power of the emperor gradually weakened in favour of the princes...
, (2 November 1692, Delden
Delden
Delden is a city in the Dutch province of Overijssel and, since 2001, in the municipality of Hof van Twente.Although its population is small, it gained city rights in 1333. Castle Twickel is a famous landmark near Delden and the Baron van Heeckeren of Twickel built a watertower in Delden...
, Overijssel
Overijssel
Overijssel is a province of the Netherlands in the central eastern part of the country. The region has a NUTS classification of NL21. The province's name means "Lands across river IJssel". The capital city of Overijssel is Zwolle and the largest city is Enschede...
– 9 November 1766, The Hague
The Hague
The Hague is the capital city of the province of South Holland in the Netherlands. With a population of 500,000 inhabitants , it is the third largest city of the Netherlands, after Amsterdam and Rotterdam...
) was a Dutch
Netherlands
The Netherlands is a constituent country of the Kingdom of the Netherlands, located mainly in North-West Europe and with several islands in the Caribbean. Mainland Netherlands borders the North Sea to the north and west, Belgium to the south, and Germany to the east, and shares maritime borders...
diplomat
Diplomat
A diplomat is a person appointed by a state to conduct diplomacy with another state or international organization. The main functions of diplomats revolve around the representation and protection of the interests and nationals of the sending state, as well as the promotion of information and...
and composer
Composer
A composer is a person who creates music, either by musical notation or oral tradition, for interpretation and performance, or through direct manipulation of sonic material through electronic media...
.

Van Wassenaer studied law and other subjects at the University of Leiden and, in 1723, married Dodonea Lucia van Goslinga (the daughter of Sicco van Goslinga
Sicco van Goslinga
Sicco van Goslinga was a Dutch statesman and diplomat, who served as gedeputeerde te velde of the States-General of the Dutch Republic with John Churchill, 1st Duke of Marlborough during his campaigns in Flanders in the War of the Spanish Succession...
), with whom he had three children. Van Wassenaer occupied high diplomatic, military and commercial posts, representing his country at the Congress of Breda
Congress of Breda
The Congress of Breda often also known as the Breda peace talks were a series of negotiations between representatives of Great Britain and France in the Dutch city of Breda that took place between 1746 and 1748. They were designed to bring an end to the Austrian War of Succession and laid the...
. It is known that he was respected not only as a diplomat, but also as a musician.

Between 1725 and 1740, he wrote the Concerti Armonici, but being a nobleman, he did not want to publish them in his own name (or because he doubted his ability as a composer). The concerto
Concerto
A concerto is a musical work usually composed in three parts or movements, in which one solo instrument is accompanied by an orchestra.The etymology is uncertain, but the word seems to have originated from the conjunction of the two Latin words...
s were published in 1740, by the Italian violin player Carlo Ricciotti (1681–1756), to whom the concertos were attributed at first. Van Wassenaer has therefore been called "the mystery composer."

The Polish composer Franciszek Lessel
Franciszek Lessel
Franciszek Lessel was a Polish composer.Lessel was born in Puławy. His father, Wincenty Ferdynand Lessel, was a pianist and composer of Czech origin who served as his first teacher. In 1799 Franciszek Lessel went to study with Joseph Haydn and continued to do until the man's death...
(1780–1838) asserted incorrectly that the concertos were written by Pergolesi. Since the style of the concertos is Italian, laid out in typical Roman fashion with four parts for violin and consisting of four parts instead of the Venetian three, they are comparable to works by Pietro Locatelli
Pietro Locatelli
Pietro Antonio Locatelli was an Italian composer and violinist.-Biography:Locatelli was born in Bergamo, Italy. A child prodigy on the violin, he was sent to study in Rome under the direction of Arcangelo Corelli...
.

However, in 1979-1980 a manuscript of the six concerti was found in the archives of Twickel Castle (the castle where Van Wassenaer was born) labeled "Concerti Armonici." Although the handwriting was not by Van Wassenaer, the manuscript did have an introduction in his hand, reading: "Partition de mes concerts gravez par le Sr. Ricciotti". Because of the research done by the Dutch musicologist Albert Dunning, there can be no doubt that the concerti were, in fact, written by Van Wassenaer.

Dunning quotes the composer's Foreword in full--
Concerti Armonici were among the works that formed the basis for Igor Stravinsky
Igor Stravinsky
Igor Fyodorovich Stravinsky ; 6 April 1971) was a Russian, later naturalized French, and then naturalized American composer, pianist, and conductor....
's Pulcinella
Pulcinella (ballet)
Pulcinella is a ballet by Igor Stravinsky based on an 18th-century play — Pulcinella is a character originating from Commedia dell'arte. The ballet premiered at the Paris Opera on 15 May 1920 under the baton of Ernest Ansermet. The dancer Léonide Massine created both the libretto and choreography,...
, based on works considered at the time to be by Pergolesi.

Apart from Concerti Armonici, three sonatas for recorder and continuo also were discovered in the early 1990s.