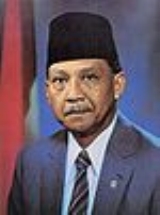 Umar Wirahadikusumah was born on 10 October 1924 to Raden Rangga Wirahadikusumah and Raden Ratnaringrum. Umar was of noble birth and completed his education under the Dutch Colonial Government.

In 1943, with Indonesia now under Japanese Occupation, Umar enlisted with youth groups operating under the supervision of the Japanese Occupational Government. These youth groups provided some physical training which Umar undertook. This was followed in October 1944 by PETA, an auxiliary force consisting of Indonesian recruits which was intended to assist the Japanese in fighting the Allies. When Indonesia declared its Independence, Umar, like many other youths of similar age joined the TKR (The People's Security Soldiers), the forerunner to the TNI.

In 1959, Umar was trusted as the Commander of Kodam V/Jaya
Kodam Jaya
Kodam Jaya is a military command area of the Military of Indonesia. It oversees Jakarta, the capital city, as well as three regions outside of Jakarta: Bekasi and Depok, which are administratively in West Java province; and Tangerang, which is in Banten province.-History:On 1 September 1945, the...
and he was now in charge of security around Jakarta.


Cracking Down on G30S

On the morning of 1 October 1965, six Generals were kidnapped from their houses. As the Commander of Kodam V/Jaya, Umar went around the city to check its security. After hearing about the kidnappings and seeing the unidentified troops occupying the Merdeka Square, Umar sent word to Kostrad
Kostrad
Kostrad is the Indonesian Army's Strategic Reserve Command. Kostrad is a Corps level command which has up to 35,000 troops...
Commander, Major General Suharto of the events which had just unfolded and requested his assistance.

Umar accepted Suharto's decision to assume command of the Army and supported him in his efforts to crack down on the attempted coup. Towards midday, Umar received a summon from President Sukarno
Sukarno
Sukarno, born Kusno Sosrodihardjo was the first President of Indonesia.Sukarno was the leader of his country's struggle for independence from the Netherlands and was Indonesia's first President from 1945 to 1967...
who was suspiciously at Halim, the place where the six Generals were taken. Suharto was worried that this was an attempt to get Umar to Halim and have him killed. Suharto firmly rejected the order.

As Suharto retook control of the situation in Jakarta
Jakarta
Jakarta is the capital and largest city of Indonesia. Officially known as the Special Capital Territory of Jakarta, it is located on the northwest coast of Java, has an area of , and a population of 9,580,000. Jakarta is the country's economic, cultural and political centre...
, Umar further consolidated it. He declared a curfew
Curfew
A curfew is an order specifying a time after which certain regulations apply. Examples:# An order by a government for certain persons to return home daily before a certain time...
between 6 PM and 6 AM and placed watch on all of the city's newspapers.

When blame for the incident was beginning to be put on the Indonesian Communist Party (PKI), Umar approved of the formation of Union of Action To Exterminate The 30 September Movement (KAP-GESTAPU), leading to the mass killing of an estimated half a million people in 1965-1966.

Although he was not part of Suharto's inner circle, Umar won great trust from Suharto for the assistance and support given in putting down G30S. As Suharto began a rise which would see him end up as President of Indonesia, Umar's career also skyrocketed. In 1965, Suharto entrusted Umar to replace him as Commanderof Kostrad. In 1967, Umar became Deputy Army Chief of Staff before finally becoming the Army Chief of Staff himself in 1969.

In 1973, his active military career came to an end and he became the Chairman of the State Audit Board (BPK), a position which he would hold for 10 years. As Chairman of BPK, Umar was responsible for making sure that Government Departments, Ministries, and Agencies were using their money properly. During his tenure as Chairman of BPK, Umar made the grim assessment that not even one Government department was free from corruption.

In March 1983, Umar reached the pinnacle of his career. Suharto, who had been elected for a 4th term as President by the People's Consultative Assembly
People's Consultative Assembly
The People's Consultative Assembly is the legislative branch in Indonesia's political system. It is composed of the members of the People's Representative Council and the Regional Representative Council. Before 2004, and the amendments to the 1945 Constitution, the MPR was the highest governing...
(MPR) selected Umar to be his Vice President. This was considered to be a rather unexpected choice as Umar's stature in Indonesian politics paled in comparison compared to his two predecessors, Hamengkubuwono IX and Adam Malik
Adam Malik
Adam Malik Batubara was Indonesia's third vice president, a senior diplomat, and one of the pioneers of Indonesian journalism.-Early life:...
. Despite being a low-key personality, Umar had a good reputation and was widely respected.

As Vice President, Umar became one of the very few in the Suharto regime who chose to combat corruption. As a religious man, Umar had hoped that religion can be used to turn corruptors to do the right deeds. Umar also conducted surprise inspections (sometimes incognito) to regional towns and villages to monitor how Government policies were affecting the People. During his Vice Presidency, Umar also held prayer services at the Vice Presidential Palace.

In May 1998, on the eve of Suharto's fall, Umar, together with Sudharmono and Try Sutrisno
Try Sutrisno
Try Sutrisno was Indonesia's sixth vice president from 1993 to 1998.-Early life:Try Sutrisno was born on 15 November 1935 in Surabaya, East Java. His father Subandi was an ambulance driver, and his mother Mardiyah was a housewife. After the Indonesian Proclamation of Independence, the Dutch...
visited Suharto at his residence to discuss possible options.