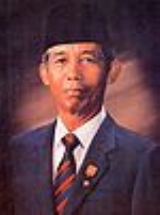 Sudharmono had just completed Junior High School when Indonesia proclaimed its independence from the Netherlands in 1945. After deciding to drop out from any further education, Sudharmono assisted in collecting weapons from the Japanese troops in preparation of the formation of an Indonesian Army
Indonesian Army
The Indonesian Army , the land component of the Indonesian Armed Forces, has an estimated strength of 328,517 regular personnel. The force's history began in 1945 when the Tentara Keamanan Rakyat "Civil Security Forces" served as paramilitary and police.Since the nation's independence struggle,...
. As a result of this, he became the Commander of the Ronggolawe Division, a position which he held throughout the course of the Indonesian War of Independence against the returning Dutch troops.

After the Dutch retreated in 1949, Sudharmono completed his Secondary Education before going to Jakarta
Jakarta
Jakarta is the capital and largest city of Indonesia. Officially known as the Special Capital Territory of Jakarta, it is located on the northwest coast of Java, has an area of , and a population of 9,580,000. Jakarta is the country's economic, cultural and political centre...
in 1952 to join the Military Law Academy. He completed the course in 1956 before serving in Medan
Medan
- Demography :The city is Indonesia's fourth most populous after Jakarta, Surabaya, and Bandung, and Indonesia's largest city outside of Java island. Much of the population lies outside its city limits, especially in Deli Serdang....
, North Sumatra
North Sumatra
North Sumatra is a province of Indonesia on the Sumatra island. Its capital is Medan. It is the most populous Indonesian province outside of Java. It is slightly larger than Sri Lanka in area.- Geography and population :...
as an Army Attorney from 1957-1961. In 1962, Sudharmono received his degree in law after completing a course at Military Law University. After this, Sudharmono was appointed Chairman of the Central Government Personnel Orders Unit and provided administrative assistance to the Government.

During the Indonesia-Malaysia confrontation
Indonesia-Malaysia confrontation
Indonesia–Malaysia confrontation during 1962–1966 was Indonesia’s political and armed opposition to the creation of Malaysia. It is also known by its Indonesian/Malay name Konfrontasi...
, President Sukarno
Sukarno
Sukarno, born Kusno Sosrodihardjo was the first President of Indonesia.Sukarno was the leader of his country's struggle for independence from the Netherlands and was Indonesia's first President from 1945 to 1967...
formed the Supreme Operations Command (KOTI), which was a war command immediately under Sukarno's control. In 1963, Sudharmono joined KOTI and was given the role of Joint Centre Operations Member for the Supreme Operations

It was from this position that Sudharmono began his rise. In October 1965, Major General Suharto was appointed Army Commander and joined KOTI as its Chief of Staff. Suharto formed a relationship with Sudharmono during these tense times in Indonesian history and it was evident that Sudharmono earned Suharto's trust. On 11 March 1966, when Suharto received the Emergency Powers
Supersemar
The Supersemar, the Indonesian abbreviation for Surat Perintah Sebelas Maret was a document signed by the Indonesian President Sukarno on March 11, 1966, giving the Army commander Lt. Gen. Suharto authority to take whatever measures he "deemed necessary" to restore order to the chaotic situation...
from Sukarno, Sudharmono was the one who reproduced copies of the letter to be distributed to other Military Officers. The next day, on 12 March 1966, Sudharmono was also the one to write the decree banning PKI .

With Suharto's rise to power, KOTI was disbanded but Sudharmono's administrative skills and the trust that he had earned from Suharto ensured him a position in Suharto's administration. When Suharto became President in 1968, Sudharmono was named Cabinet Secretary as well as Chairman of the Economic Stability Council. In 1970, Sudharmono was moved from the position of Cabinet Secretary to the State Secretary, a position which allowed him to assist Suharto in the day-to-day running of the Government. Whilst State Secretary, Sudharmono also covered for other Ministers when they are unable to perform their duties; with short stints as Interim Information Minister and Interim Home Affairs Minister as well as helping to produce Suharto's accountability speech before the People Consultative Assembly (MPR) General Session.

In 1980, Sudharmono's position as State Secretary received a significant boost through a Presidential Decision which gave the State Secretary the power to supervise Government purchases exceeding 500 Million Rupiahs.

By the 1980s, Sudharmono had proved his loyalty to Suharto and had also shown that he does not have any ambitions. At the 1983 Golkar Congress, with Suharto's support, Sudharmono was elected as the Chairman of Golkar.

As Chairman, Sudharmono conducted many inspection tours of Golkar branches in the regions. Sudharmono also initiated a membership drive to get more voters to Golkar, an initiative that paid dividends in the 1987 Legislative Elections when Golkar's votes increased from 64% to 73%. The 1987 Legislative Elections was also a historical one for Golkar as it emerged victorious in the Province of Aceh
Aceh
Aceh is a special region of Indonesia, located on the northern tip of the island of Sumatra. Its full name is Daerah Istimewa Aceh , Nanggroë Aceh Darussalam and Aceh . Past spellings of its name include Acheh, Atjeh and Achin...
for the first time .

The possibility of Sudharmono becoming Vice President displeased many in ABRI. Although Sudharmono had been an Army man himself and had ended his career with the rank of Lieutenant General
Lieutenant General
Lieutenant General is a military rank used in many countries. The rank traces its origins to the Middle Ages where the title of Lieutenant General was held by the second in command on the battlefield, who was normally subordinate to a Captain General....
, he had spent most of his career behind a desk instead of commanding troops. For this, he was looked down upon by ABRI. Suharto was aware of this and before ABRI could do anything, replaced Benny Moerdani with Try Sutrisno
Try Sutrisno
Try Sutrisno was Indonesia's sixth vice president from 1993 to 1998.-Early life:Try Sutrisno was born on 15 November 1935 in Surabaya, East Java. His father Subandi was an ambulance driver, and his mother Mardiyah was a housewife. After the Indonesian Proclamation of Independence, the Dutch...
as ABRI Commander. This move crippled ABRI as Moerdani was more assertive when it comes to disagreeing with Suharto while Try, having been Suharto's aide-de-camp would be more passive.

At the 1988 MPR General Session in March 1988, controversy continued to dog Sudharmono's nomination as Vice President. First, Brigadier General
Brigadier General
Brigadier general is a senior rank in the armed forces. It is the lowest ranking general officer in some countries, usually sitting between the ranks of colonel and major general. When appointed to a field command, a brigadier general is typically in command of a brigade consisting of around 4,000...
Ibrahim Saleh interrupted the Session and was beginning to launch a scathing attack to Sudharmono before he was taken down from the podium by ABRI MPR members. Then Sarwo Edhie Wibowo
Sarwo Edhie Wibowo
Sarwo Edhie Wibowo was one of Indonesia's most famous Generals.-Early life:Sarwo Edhie was born in Purworejo, Central Java to a family of civil servants working for the Dutch Colonial Government. As a child, he learned silat as a form of self-defense...
, a General who had helped Suharto get to power in the mid-60's resigned from both his MPR and People's Representative Council
People's Representative Council
The People's Representative Council , sometimes referred to as the House of Representatives, is one of two elected national legislative assemblies in Indonesia....
(DPR) in protest. Finally, United Development Party
United Development Party
The United Development Party , sometimes translated as Development Unity Party is a political party in Indonesia. It is an islamic party and currently led by Suryadharma Ali.-Origins:...
Chairman, Jaelani Naro nominated himself as Vice President, presumably with the private backing in ABRI, who in public supported Sudharmono's nomination.

Suharto finally intervened. He cited a decision that the MPR made in 1973 that one of the criteria for a Vice President was that he should be able to work with the President. Suharto also conducted discussions with Naro and convinced him to withdraw the nomination. With Naro out of the way, Sudharmono was finally elected as Vice President.

As Vice President, Sudharmono was extremely active. He regularly visited the Provinces and set up Mailbox 5000, a place where the people can send their suggestions and complains and the government. Sudharmono, ever the specialist in giving administrative assistance, was also given the duty by Suharto to supervise government bureaucracy.

Despite this however, ABRI continued to show their displeasure at Sudharmono's election as Vice President. At the Golkar Congress in October 1988, ABRI got their revenge against Sudharmono when they secured the election of Wahono as the Chairman of Golkar. ABRI members were also responsible for a smear campaign which involved accusing Sudharmono as a communist. Finally in March 1993, to prevent having to deal with a Vice President that they did not like, ABRI nominated Try Sutrisno as Vice President without waiting for Suharto to make his choice.

In his book, Suharto: A Political Biography, Robert Elson
Robert Elson
Robert Edward Elson is an historian, author and academic regarded as an authority on Indonesian history, with his biography of former President Suharto and works on the cultivation system in Colonial Java considered leading works on their subjects...
theorized of the possibility of Sudharmono's Vice Presidency being the final step before the Indonesian Presidency itself and that Suharto only continued because of the reaction to Sudharmono's nomination There are two reasons for this:

In 1997, Sudharmono released his autobiography
Autobiography
An autobiography is a book about the life of a person, written by that person.-Origin of the term:...
, Pengalaman Dalam Masa Pengabdian (Experiences During Time of Service). Concurrently, a book was also released called Kesan dan Kenangan dari Teman: 70 Tahun H. Sudharmono SH (Impressions and Memories from Colleagues: 70 Years of Sudharmono) which talked about Sudharmono from the point of view of those who he had worked it. Because the release of these books happened a year before the 1998 MPR General Session, there were rumors that Sudharmono was going to make a political comeback and aim for the Vice Presidency once again .