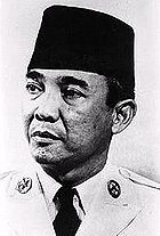 Sukarno was the leader of his country's struggle for independence from the Netherlands and was Indonesia's first President from 1945 to 1967. He was replaced by one of his generals, Suharto (see Transition to the New Order), and remained under house arrest until his death.
The spelling "Sukarno" is frequently used in English as it is based on the newer official spelling in Indonesia since 1947 but the older spelling Soekarno, based on Dutch orthography, is still frequently used, mainly because he signed his name in the old spelling.
x