Encyclopedia
Ulyanovsk was a Cossack leader who led a major uprising against the nobility and Tsar's bureaucracy in South Russia.-Early life:...
. Also in Simbirsk another country rebel, Yemelyan Pugachev
Yemelyan Pugachev
Yemelyan Ivanovich Pugachov , was a pretender to the Russian throne who led a great Cossack insurrection during the reign of Catherine II...
, was imprisoned before execution. At the time Simbirsk possessed a wooden kremlin
Kremlin
A kremlin , same root as in kremen is a major fortified central complex found in historic Russian cities. This word is often used to refer to the best-known one, the Moscow Kremlin, or metonymically to the government that is based there...
, which was destroyed by a fire during the 18th century.

In 1924, the city was renamed Ulyanovsk in honor of Vladimir Ulyanov, better known as Lenin
Vladimir Lenin
Vladimir Ilyich Lenin was a Russian Marxist revolutionary and communist politician who led the October Revolution of 1917. As leader of the Bolsheviks, he headed the Soviet state during its initial years , as it fought to establish control of Russia in the Russian Civil War and worked to create a...
, who was born in Simbirsk in 1870. Two other Russian political leaders, Alexander Kerensky
Alexander Kerensky
Alexander Fyodorovich Kerensky was a major political leader before and during the Russian Revolutions of 1917.Kerensky served as the second Prime Minister of the Russian Provisional Government until Vladimir Lenin was elected by the All-Russian Congress of Soviets following the October Revolution...
and Alexander Protopopov
Alexander Protopopov
Alexander Dmitriyevich Protopopov was a Russian statesman, politician Octobrist Party.- Biography :Member of Third and Fourth Dumas...
, were also born in Simbirsk.

During the Soviet period Ulyanovsk was an important tourist center, drawing visitors from around the Soviet Union because of its revolutionary importance.

A major series of explosions occurred at an arms depot of the Russian military near Ulyanovsk on November 13, 2009. At least two people were killed in the explosion and 43 were rescued from a bomb shelter where they had taken refuge.

A heat-wave in the city in July–August 2010 caused the deaths of 300 persons.

Ulyanovsk has a humid continental climate
Humid continental climate
A humid continental climate is a climatic region typified by large seasonal temperature differences, with warm to hot summers and cold winters....
(meaning hot summers and cold winters). Average temperature is -11 °C (11 °F) in January, 19 °C (66 °F) in July. Autumns are generally warm, with snow beginning to accumulate by the middle of November. Winter
Winter
Winter is the coldest season of the year in temperate climates, between autumn and spring. At the winter solstice, the days are shortest and the nights are longest, with days lengthening as the season progresses after the solstice.-Meteorology:...
s tend to be cold but with moderate amounts of snowfall, nighttime lows occasionally dipping below -25 °C (-13 °F). Summer
Summer
Summer is the warmest of the four temperate seasons, between spring and autumn. At the summer solstice, the days are longest and the nights are shortest, with day-length decreasing as the season progresses after the solstice...
weather arrives in the middle of May. Precipitation averages about 480 millimeters annually. The city is subject to frequent, but moderate, drought
Drought
A drought is an extended period of months or years when a region notes a deficiency in its water supply. Generally, this occurs when a region receives consistently below average precipitation. It can have a substantial impact on the ecosystem and agriculture of the affected region...
s. Spring and summer are sunny, but autumn and winter are usually cloudy. Median annual temperature is 5 °C (42 °F). Ulyanovsk is located in the Moscow time
Moscow Time
Moscow Time is the time zone for the city of Moscow, Russia and most of western Russia, including Saint Petersburg. It is the second westernmost of the nine time zones of Russia. Moscow Time has been UTC+4 year-round since 27 March 2011....
zone (UTC+3
UTC+3
UTC+03:00 is an identifier for a time offset from UTC of +03. In ISO 8601 the associated time would be written as . This time is used in:-East Africa Time:*Comoros*Djibouti*Eritrea*Ethiopia*Kenya*Madagascar...
).

Ulyanovsk is a significant industrial city. The UAZ
UAZ
UAZ , Ulyanovsky Avtomobilny Zavod is an automobile manufacturer based in Ulyanovsk, Russia which manufactures off-road vehicles, buses and trucks. It is best known for its Model 469 jeep, which has seen wide use as a military vehicle in Russia and around the world...
automobile manufacturing plant, Aviastar-SP
Aviastar-SP
CJSC Aviastar-SP is a Russian aircraft factory based in Ulyanovsk. It is a closed shares joint stock company. It has replaced the Soviet Ulyanovsk Aviation Industrial Complex and manufactures the cargo aircraft An-124 Ruslan and the whole Tu-204 family...
Aircraft Company and UMZ
Ulyanovsk Mechanical Plant
Ulyanovsk Mechanical Plant or UMP for short is a Soviet/Russian military enterprise, now part of Almaz-Antey holding. Founded on January 1, 1966 by the Decree of Soviet government...
are based in the city along with a variety of light industry and food-processing enterprises.

Tourism is a growing business in the city and the surrounding area.

The 31st Airborne Brigade of the Russian Airborne Troops of the armed forces is based in Ulyanovsk. An ammunition depot on the outskirts of the city was the scene of a large fatal fire on November 13, 2009.

A railway bridge across the Volga was built in 1912–1916 and two automobile lanes were added to it in 1953–1958,
allowing for the city to expand on the Eastern (left) bank of the river and transforming it into a local transport hub. 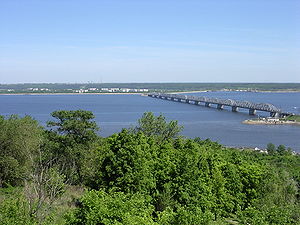 As the aging Ulyanovsk bridge, the only crossing of the Volga in the 400 km stretch from Kazan
Kazan
Kazan is the capital and largest city of the Republic of Tatarstan, Russia. With a population of 1,143,546 , it is the eighth most populous city in Russia. Kazan lies at the confluence of the Volga and Kazanka Rivers in European Russia. In April 2009, the Russian Patent Office granted Kazan the...
to Tolyatti
Tolyatti
Tolyatti , also known as Togliatti, is a city in Samara Oblast, Russia. It serves as the administrative center of Stavropolsky District, although it is administratively separate from it...
, could no longer cope with the growing needs of the city, the construction of New Ulyanovsk Bridge, a truss bridge
Truss bridge
A truss bridge is a bridge composed of connected elements which may be stressed from tension, compression, or sometimes both in response to dynamic loads. Truss bridges are one of the oldest types of modern bridges...
began in the late 1980s. Completion was delayed significantly due to catastrophic economic circumstances following the collapse of the Soviet Union. Its official opening ceremony was on 24 November 2009 by the Russian President Dmitry Medvedev
Dmitry Medvedev
Dmitry Anatolyevich Medvedev is the third President of the Russian Federation.Born to a family of academics, Medvedev graduated from the Law Department of Leningrad State University in 1987. He defended his dissertation in 1990 and worked as a docent at his alma mater, now renamed to Saint...
- although traffic was using the bridge a few days earlier due arms depot blasts. The bridge has a total length of 5.5 km, making it one of the longest in Europe.

The city is also divided by the river Sviyaga, a tributary of the Volga but whose confluence with it is about 200 km north of the city. Three bridges cross the Sviyaga are also in a poor condition but are being closed and renovated from 2010 onwards.

Local transport in the city is provided by 17 tram lines, 7 trolleybus routes, 50 municipal bus routes and around 150 minibus services.

There is also a number of technical and medical colleges in Ulyanovsk.

During the Soviet period, Ulyanovsk lost much of its historical heritage. All traces of the original wooden fort are gone, as are all the churches of old Simbirsk; only a few 19th century buildings remain in the city, most notably the houses where Lenin lived between 1870–1887. The reconstruction of the Cathedral of the Holy Trinity was considered, but has since been canceled. However, historical constructions have remained many. Among them the house in which writer Goncharov was born, Protestant church and other buildings.

Ulyanovsk is twinned
Town twinning
Twin towns and sister cities are two of many terms used to describe the cooperative agreements between towns, cities, and even counties in geographically and politically distinct areas to promote cultural and commercial ties.- Terminology :...
with: Krefeld
Krefeld
Krefeld , also known as Crefeld until 1929, is a city in North Rhine-Westphalia, Germany. It is located northwest of Düsseldorf, its centre lying just a few kilometres to the west of the River Rhine; the borough of Uerdingen is situated directly on the Rhine...
, Germany
Germany
Germany , officially the Federal Republic of Germany , is a federal parliamentary republic in Europe. The country consists of 16 states while the capital and largest city is Berlin. Germany covers an area of 357,021 km2 and has a largely temperate seasonal climate...
Trabzon
Trabzon
Trabzon is a city on the Black Sea coast of north-eastern Turkey and the capital of Trabzon Province. Trabzon, located on the historical Silk Road, became a melting pot of religions, languages and culture for centuries and a trade gateway to Iran in the southeast and the Caucasus to the northeast...
, Turkey
Turkey
Turkey , known officially as the Republic of Turkey , is a Eurasian country located in Western Asia and in East Thrace in Southeastern Europe...
Oklahoma City
Oklahoma city
Oklahoma City is the capital and largest city of the U.S. state of Oklahoma.Oklahoma City may also refer to:*Oklahoma City metropolitan area*Downtown Oklahoma City*Uptown Oklahoma City*Oklahoma City bombing*Oklahoma City National Memorial...
, United States
United States
The United States of America is a federal constitutional republic comprising fifty states and a federal district...
Shenzhen
Shenzhen
Shenzhen is a major city in the south of Southern China's Guangdong Province, situated immediately north of Hong Kong. The area became China's first—and one of the most successful—Special Economic Zones...
, China
China
Chinese civilization may refer to:* China for more general discussion of the country.* Chinese culture* Greater China, the transnational community of ethnic Chinese.* History of China* Sinosphere, the area historically affected by Chinese culture...
Saransk
Saransk
Saransk is a city in central European Russia and the capital of the Republic of Mordovia, as well as its financial and economic center. It is located in the Volga basin at the confluence of the Saranka and Insar Rivers, about east of Moscow...
, Russia Zhukovsky
Zhukovsky (city)
Zhukovsky is a city in Moscow Oblast, Russia, located on the Moskva River, southeast of Moscow. Population: The urban-type settlement of Stakhanovo was founded in 1935 from the dacha settlement Otdykh . It was named after Alexey Stakhanov - a famous Soviet miner...
, Russia