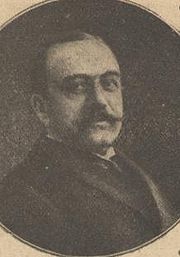 Alexander Dmitriyevich Protopopov (1866 – October 27, 1918) was a Russia
Russia
Russia or , officially known as both Russia and the Russian Federation , is a country in northern Eurasia. It is a federal semi-presidential republic, comprising 83 federal subjects...
n statesman, politician Octobrist Party.

He continued the reactionary policies of his predecessor Boris Stürmer
Boris Stürmer
Baron Boris Vladimirovich Stürmer was a Russian statesman. He served as Prime Minister, Foreign Minister, and Interior Minister of the Russian Empire for several months during 1916.- Biography :...
, and was supported by the Empress Alexandra who kept him in office despite the mounting protests against him, and the repeated requests for Tsar Nicholas II to dismiss him.

After the Romanov dynasty fell in the first Russian Revolution
February Revolution
The February Revolution of 1917 was the first of two revolutions in Russia in 1917. Centered around the then capital Petrograd in March . Its immediate result was the abdication of Tsar Nicholas II, the end of the Romanov dynasty, and the end of the Russian Empire...
of 1917, he was arrested and kept in prison until the Bolsheviks executed him in 1918.