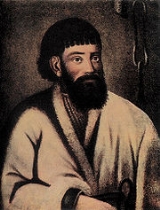 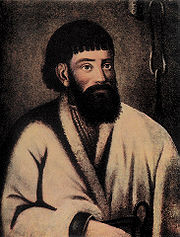 Yemelyan Ivanovich Pugachov (e. 1742 – ) , was a pretender to the Russia
Russia
Russia or , officially known as both Russia and the Russian Federation , is a country in northern Eurasia. It is a federal semi-presidential republic, comprising 83 federal subjects...
n throne who led a great Cossack
Cossack
Cossacks are a group of predominantly East Slavic people who originally were members of democratic, semi-military communities in what is today Ukraine and Southern Russia inhabiting sparsely populated areas and islands in the lower Dnieper and Don basins and who played an important role in the...
insurrection during the reign of Catherine II
Catherine II of Russia
Catherine II, also known as Catherine the Great , Empress of Russia, was born in Stettin, Pomerania, Prussia on as Sophie Friederike Auguste von Anhalt-Zerbst-Dornburg...
. Alexander Pushkin wrote a remarkable history of the rebellion, The History of Pugachov, and he recounted some of the events in his novel The Captain's Daughter
The Captain's Daughter
The Captain's Daughter is a historical novel by the Russian writer Alexander Pushkin. It was first published in 1836 in the fourth issue of the literary journal Sovremennik. The novel is a romanticized account of Pugachev's Rebellion in 1773-1774....
(1836).

Pugachov, the son of a small Don Cossack landowner, was the youngest son of four children. Born in the stanitsa
Stanitsa
Stanitsa is a village inside a Cossack host . Stanitsas were the primary unit of Cossack hosts.Historically, the stanitsa was a unit of economic and political organisation of the Cossack peoples primarily in the southern regions of the Russian Empire.Much of the land was held in common by the...
Zimoveyskaya, he signed on to military service at the age of 17. One year later, he married a Cossack girl, Sofya Nedyuzheva, with whom he had a total of five children, two of whom died in infancy. Shortly after his marriage, he joined the Russian Second Army in Prussia during the Seven Years' War
Seven Years' War
The Seven Years' War was a global military war between 1756 and 1763, involving most of the great powers of the time and affecting Europe, North America, Central America, the West African coast, India, and the Philippines...
under the command of Count Zakhar Chernyshov. He returned home in 1762, and for the next seven years would divide his time between his home village and several service assignments. During this period, he was recognized for his military skill and achieved the Cossack rank of khorunzhii, which would be roughly equivalent to the post of company commander. It was also during this period, in 1770 at the siege of Bender
Bender, Moldova
Bender or Bendery, also known as Tighina is a city within the internationally recognized borders of Moldova under de facto control of the unrecognized Transnistria Republic since 1992...
that he first displays a flair for impersonation, boasting to his fellow comrades that his sword was given to him by his 'godfather', Peter I.


Life as a Fugitive

In 1770, Pugachov requested leave to return home to recover from a severe illness, later seeking permanent discharge. Despite urging from military commanders, Pugachov refused to be treated in a military infirmary or return to the front. Convinced by his brother-in-law, Simon Pavlov, he joined a dissatisfied Cossack group who were fleeing eastward for an independent Cossack community on the Terek River. After they were safely across the Don river, he returned home to Zimoveyskaya. The fleeing Cossacks were caught soon after by the authorities, and Pavlov implicated Pugachov in the desertion, causing his arrest. He was held for 48 hours before he managed to escape, beginning his fugitive career.
Fleeing for the Cossack community on the Terek River, he arrived in early January of 1772. During his six weeks in the area, he joined a protest group and was elected their official representative. On his way to St. Petersburg to make an official complaint, his fugitive status was discovered in Mozdok and he was again arrested. He would escape on February 13 and return home, only to be arrested once again.
Dispatched to Cherkassk
Cherkassk
Starocherkasskaya , formerly Cherkassk , is a village in Aksaysky District of Rostov Oblast, Russia, with origins dating from the late 16th century...
for investigation, he would meet Lukyan Ivanovich Khudiakov, whom he would trick into releasing him. After which he fled to Vetka, a Polish border settlement, with the help of many raskol'niki. He returned to Russia in the autumn of 1772 by pretending to be an Old Believer wishing to return home. He received a visa to settle in the Malykovka district (present day Vol'sk), where he most likely first heard of the Yaik Cossacks rebellion.

The idea of impersonating the late Emperor Peter III occurred to Pugachov early on, even before he reached the Yaik Cossacks. It is of no surprise, given another recent peasant impersonator, Fedot Bogmolov, and Russia's history of impersonators.
Pugachov, posing as a wealthy merchant, reportedly tested the feelings of the Cossacks at the Yaitsk by suggesting that he lead a mass exodus into Turkey. When the majority seemed to agree to his plan, he deemed it the right time to begin his rebellion
Though he was arrested shortly after once again, and this time held for five months at Kazan, he would escape once more and return to the Yaitsk to start his revolt.
By promising to return several privileges to the Cossacks, and to restore the Old Belief, he was able to gain the support he needed to promote his identity as Peter III.
The story of Pugachov's strong resemblance to the tsar Peter III, who in 1762 was overthrown and murdered by his wife, the future empress Catherine II, comes from a later legend. Pugachov told the story that he and his principal adherents had escaped from the clutches of Catherine.

Having amassed an army through propaganda, recruitment and promise of reform, Pugachov and his generals were able to overrun much of the region stretching between the Volga River and the Urals. Pugachov's greatest victory of the insurgency was the taking
Battle of Kazan (1774)
The Battle of Kazan was a major battle during the Pugachev Rebellion. It took place on 12–15 July 1774 in Kazan, Russia, and the surrounding area. The first stage began in the morning of 12 July, when rebels under Yemelyan Pugachev defeated government troops and besieged them in the Kazan Kremlin....
of Kazan
Kazan
Kazan is the capital and largest city of the Republic of Tatarstan, Russia. With a population of 1,143,546 , it is the eighth most populous city in Russia. Kazan lies at the confluence of the Volga and Kazanka Rivers in European Russia. In April 2009, the Russian Patent Office granted Kazan the...
. As well as amassing large numbers of Cossacks and peasants, Pugachov also acquired artillery and arms and was able to supply his force better than the Russian army would have predicted.

In response, General Peter Panin thereupon set out against the rebels with a large army, but difficulty of transport, lack of discipline, and the gross insubordination of his ill-paid soldiers paralyzed all his efforts for months, while the innumerable and ubiquitous bands of Pugachov gained victories in nearly every engagement. Not until August 1774 did General Michelsohn inflict a crushing defeat upon the rebels near Tsaritsyn
Volgograd
Volgograd , formerly called Tsaritsyn and Stalingrad is an important industrial city and the administrative center of Volgograd Oblast, Russia. It is long, north to south, situated on the western bank of the Volga River...
, when they lost ten thousand killed or taken prisoner. Panin's savage reprisals, after the capture of Penza
Penza
-Honors:A minor planet, 3189 Penza, discovered by Soviet astronomer Nikolai Stepanovich Chernykh in 1978, is named after the city.-Notable residents:...
, completed their discomfiture. On September 14, 1774 Pugachev's own Cossacks delivered him to Yaitsk. Alexander Suvorov
Alexander Suvorov
Alexander Vasilyevich Suvorov , Count Suvorov of Rymnik, Prince in Italy, Count of the Holy Roman Empire , was the fourth and last generalissimo of the Russian Empire.One of the few great generals in history who never lost a battle along with the likes of Alexander...
had him placed in a metal cage and sent first to Simbirsk and then to Moscow for a public execution which took place on . In the public square, he was decapitated, then drawn and quartered.

The Pugachov rebellion had a long lasting effect on Russia for years to come. While Catherine II tried to reform the provincial administration, the horrors of the revolt caused her to drop other reforms, particularly attempts to emancipate the peasant serfs of Russia. Her regime became increasingly reactionary. The Russian writer Alexander Radishchev
Alexander Radishchev
Alexander Nikolayevich Radishchev was a Russian author and social critic who was arrested and exiled under Catherine the Great. He brought the tradition of radicalism in Russian literature to prominence with the publication in 1790 of his Journey from St. Petersburg to Moscow...
, in his Journey from St. Petersburg to Moscow
Journey from St. Petersburg to Moscow
The Journey From St. Petersburg to Moscow , published in 1790, was the most famous work by the Russian writer Aleksandr Nikolayevich Radishchev....
, attacked the Russian government and, in particular the institution of serfdom
Serfdom
Serfdom is the status of peasants under feudalism, specifically relating to Manorialism. It was a condition of bondage or modified slavery which developed primarily during the High Middle Ages in Europe and lasted to the mid-19th century...
. In the book, he refers to Pugachov and the rebellion as a warning.

The town in which Pugachov was born was later named in his honor by the Soviet government
Government of the Soviet Union
The Council of Ministers of the Union of Soviet Socialist Republics , was the de jure government comprising the highest executive and administrative body of the Soviet Union from 1946 until 1991....
.

The central square in the Kazakh
Kazakhstan
Kazakhstan , officially the Republic of Kazakhstan, is a transcontinental country in Central Asia and Eastern Europe. Ranked as the ninth largest country in the world, it is also the world's largest landlocked country; its territory of is greater than Western Europe...
town of Uralsk
Oral, Kazakhstan
Oral , Uralsk in Russian, formerly known as Yaitsk , is a city in northwestern Kazakhstan, at the confluence of the Ural and Chogan Rivers close to the Russian border. As it is located on the western side of the Ural river, it is considered geographically in Europe. It has a population of 350,000...
is named Pugachov Square.