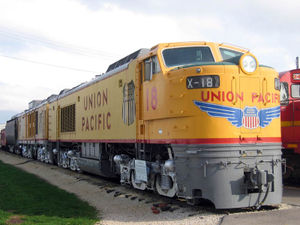 A turbo-electric transmission uses electric generators to convert the mechanical energy of a turbine
Turbine
A turbine is a rotary engine that extracts energy from a fluid flow and converts it into useful work.The simplest turbines have one moving part, a rotor assembly, which is a shaft or drum with blades attached. Moving fluid acts on the blades, or the blades react to the flow, so that they move and...
(steam
Steam turbine
A steam turbine is a mechanical device that extracts thermal energy from pressurized steam, and converts it into rotary motion. Its modern manifestation was invented by Sir Charles Parsons in 1884....
or gas
Gas turbine
A gas turbine, also called a combustion turbine, is a type of internal combustion engine. It has an upstream rotating compressor coupled to a downstream turbine, and a combustion chamber in-between....
) into electric energy and electric motor
Electric motor
An electric motor converts electrical energy into mechanical energy.Most electric motors operate through the interaction of magnetic fields and current-carrying conductors to generate force...
s to convert it back into mechanical energy to power the driveshaft
Driveshaft
A drive shaft, driveshaft, driving shaft, propeller shaft, or Cardan shaft is a mechanical component for transmitting torque and rotation, usually used to connect other components of a drive train that cannot be connected directly because of distance or the need to allow for relative movement...
s.

Turbo-electric drives are used in some locomotive
Locomotive
A locomotive is a railway vehicle that provides the motive power for a train. The word originates from the Latin loco – "from a place", ablative of locus, "place" + Medieval Latin motivus, "causing motion", and is a shortened form of the term locomotive engine, first used in the early 19th...
s (gas turbines, e.g. with the first TGV
TGV
The TGV is France's high-speed rail service, currently operated by SNCF Voyages, the long-distance rail branch of SNCF, the French national rail operator....
) and ships (steam and sometimes gas turbines). The advantage of the turbo-electric transmission is that it allows the adaptation of high-speed turning turbines to the slow turning propeller
Propeller
A propeller is a type of fan that transmits power by converting rotational motion into thrust. A pressure difference is produced between the forward and rear surfaces of the airfoil-shaped blade, and a fluid is accelerated behind the blade. Propeller dynamics can be modeled by both Bernoulli's...
s or wheel
Wheel
A wheel is a device that allows heavy objects to be moved easily through rotating on an axle through its center, facilitating movement or transportation while supporting a load, or performing labor in machines. Common examples found in transport applications. A wheel, together with an axle,...
s without the need of a heavy and complex gearbox
Transmission (mechanics)
A machine consists of a power source and a power transmission system, which provides controlled application of the power. Merriam-Webster defines transmission as: an assembly of parts including the speed-changing gears and the propeller shaft by which the power is transmitted from an engine to a...
. It also has the second advantage of being able to provide electricity for the ship or train's other electrical systems, such as lighting, computers, radar, and communications equipment.

A disadvantage shared with the more common diesel-electric powertrain
Powertrain
In a motor vehicle, the term powertrain or powerplant refers to the group of components that generate power and deliver it to the road surface, water, or air. This includes the engine, transmission, drive shafts, differentials, and the final drive...
is that because of the double conversion of mechanical energy to electricity and back more energy gets lost than with a mechanical transmission. Gas turbines are much more energy efficient
Energy conversion efficiency
Energy conversion efficiency is the ratio between the useful output of an energy conversion machine and the input, in energy terms. The useful output may be electric power, mechanical work, or heat.-Overview:...
than equally sized diesel engine
Diesel engine
A diesel engine is an internal combustion engine that uses the heat of compression to initiate ignition to burn the fuel, which is injected into the combustion chamber...
s. Efficiency usually ranges from 30% to 38% for Diesel engines and from 40% to 60% in a gas turbine engine.

– most powerful steam turbo-electric units in a passenger ship, 42500 shp per shaft, 2 shaftsssss – most powerful steam turbo-electric passenger ship ever, 40000 shp per shaft (50,000 shp at max power), 4 shafts – powered by General Electric
General Electric
General Electric Company , or GE, is an American multinational conglomerate corporation incorporated in Schenectady, New York and headquartered in Fairfield, Connecticut, United States...
gas turbine
Gas turbine
A gas turbine, also called a combustion turbine, is a type of internal combustion engine. It has an upstream rotating compressor coupled to a downstream turbine, and a combustion chamber in-between....
s in addition to her diesel generators to produce the power to drive her four Rolls-Royce
Rolls-Royce plc
Rolls-Royce Group plc is a global power systems company headquartered in the City of Westminster, London, United Kingdom. It is the world’s second-largest maker of aircraft engines , and also has major businesses in the marine propulsion and energy sectors. Through its defence-related activities...
MerMaid
Mermaid
A mermaid is a mythological aquatic creature with a female human head, arms, and torso and the tail of a fish. A male version of a mermaid is known as a "merman" and in general both males and females are known as "merfolk"...
electric podded azimuth thruster
Azimuth thruster
An azimuth thruster is a configuration of ship propellers placed in pods that can be rotated in any horizontal direction, making a rudder unnecessary...
s.