Encyclopedia
Tug of war, also known as tug o' war, tug war, rope war or rope pulling, is a sport that directly pits two teams against each other in a test of strength. The term may also be used as a metaphor
Metaphor
A metaphor is a literary figure of speech that uses an image, story or tangible thing to represent a less tangible thing or some intangible quality or idea; e.g., "Her eyes were glistening jewels." Metaphor may also be used for any rhetorical figures of speech that achieve their effects via...
to describe a demonstration of brute strength by two opposing groups, such as a rivalry between two departments of a company. In this scenario, there is often a third party who is considered the "rope" in the tug of war.

The origins of tug of war are uncertain, but it is beyond dispute that this once royal sport was practiced in ancient Egypt and China, where it was held in legend that the Sun and Moon played Tug of War over the light and darkness.

According to a Tang dynasty
Tang Dynasty
The Tang Dynasty was an imperial dynasty of China preceded by the Sui Dynasty and followed by the Five Dynasties and Ten Kingdoms Period. It was founded by the Li family, who seized power during the decline and collapse of the Sui Empire...
book, The Notes of Feng, tug of war, under the name "hook pulling"(牵钩), was used by the military commander of the State of Chu
Chu (state)
The State of Chu was a Zhou Dynasty vassal state in present-day central and southern China during the Spring and Autumn period and Warring States Period . Its ruling house had the surname Nai , and clan name Yan , later evolved to surname Mi , and clan name Xiong...
during the Spring and Autumn Period (8th century BCE to 5th century BCE) to train warriors. During the Tang dynasty, Emperor Xuanzong of Tang
Emperor Xuanzong of Tang
Emperor Xuanzong of Tang , also commonly known as Emperor Ming of Tang , personal name Li Longji , known as Wu Longji from 690 to 705, was the seventh emperor of the Tang dynasty in China, reigning from 712 to 756. His reign of 43 years was the longest during the Tang Dynasty...
promoted large-scale tug of war games, using ropes of up to 167 meters with shorter ropes attached and more than 500 people on each end of the rope. Each side also had its own team of drummers to encourage the participants.

Archeological evidence shows that tug of war was also popular in India in 12th century AD: 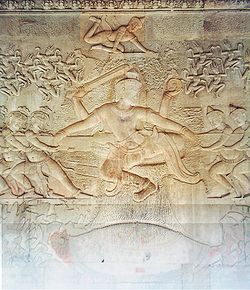 Tug of war stories about heroic champions from Scandinavia and Germany circulate Western Europe where Viking warriors pull animal skins over open pits of fire in tests of strength and endurance in preparation for battle and plunder.

1800 – tug of war begins a new tradition among seafaring men who were required to tug on lines to adjust sails while ships were under way and even in battle.

Two teams of eight, whose total mass must not exceed a maximum weight determined for the class, align themselves at the end of a rope
Rope
A rope is a length of fibres, twisted or braided together to improve strength for pulling and connecting. It has tensile strength but is too flexible to provide compressive strength...
(approximately 10 centimetres in circumference). The rope is marked with a "centre line" and two markings four metres either side of the centre line. The teams start with the rope's centre line directly above a line marked on the ground, and once the contest (the "pull") has commenced, attempt to pull the other team such that the marking on the rope closest to their opponent crosses the centre line, or the opponents commit a foul (such as a team member sitting or falling down). Lowering ones elbow below the knee during a 'pull' known as 'Locking' is a foul, as well as touching the ground for extended periods of time. The rope must go under the arms, actions such as pulling rope over shoulders may be considered fouls. These rules apply in heavily weighted competitions. For example, if teams are competing to determine who goes to the world Championships, the rules will be much stricter. But in small entertainment competitions the rules are arbitrarily interpreted and vaguely followed.

A contest may feature a moat in a neutral zone, usually of mud or softened ground, which eliminates players who cross the zone or fall into it.

There are tug of war clubs in many countries, and both men and women participate.

The sport was part of the Olympic Games
Olympic Games
The Olympic Games is a major international event featuring summer and winter sports, in which thousands of athletes participate in a variety of competitions. The Olympic Games have come to be regarded as the world’s foremost sports competition where more than 200 nations participate...
from 1900 until 1920, but has not been included since. However, there is currently an online campaign on Facebook
Facebook
Facebook is a social networking service and website launched in February 2004, operated and privately owned by Facebook, Inc. , Facebook has more than 800 million active users. Users must register before using the site, after which they may create a personal profile, add other users as...
to get the sport reinstated as an Olympic event. The sport is contested in the World Games
World Games
The World Games, first held in 1981, are an international multi-sport event, meant for sports, or disciplines or events within a sport, that are not contested in the Olympic Games...
. The Tug of War International Federation
Tug of War International Federation
The Tug of War International Federation is the international governing body for the sport of tug of war.-Member countries:Due to national organization, and rivalry many countries listed below have affiliated as their individual country, i.e...
(TWIF), organises World Championships for nation teams biannually, for both indoor and outdoor contests, and a similar competition for club teams.

The sport is played almost in every country in the world. However, a small selection of countries have set up a national body to govern the sport. Most of these national bodies are associated then with the International governing body call TWIF which stands for The Tug of War International Federation. As of 2008 there are 53 countries associated with TWIF, among which are Scotland
Scotland
Scotland is a country that is part of the United Kingdom. Occupying the northern third of the island of Great Britain, it shares a border with England to the south and is bounded by the North Sea to the east, the Atlantic Ocean to the north and west, and the North Channel and Irish Sea to the...
, Ireland
Ireland
Ireland is an island to the northwest of continental Europe. It is the third-largest island in Europe and the twentieth-largest island on Earth...
, England
England
England is a country that is part of the United Kingdom. It shares land borders with Scotland to the north and Wales to the west; the Irish Sea is to the north west, the Celtic Sea to the south west, with the North Sea to the east and the English Channel to the south separating it from continental...
, India
India
India , officially the Republic of India , is a country in South Asia. It is the seventh-largest country by geographical area, the second-most populous country with over 1.2 billion people, and the most populous democracy in the world...
, Switzerland
Switzerland
Switzerland name of one of the Swiss cantons. ; ; ; or ), in its full name the Swiss Confederation , is a federal republic consisting of 26 cantons, with Bern as the seat of the federal authorities. The country is situated in Western Europe,Or Central Europe depending on the definition....
and Belgium
Belgium
Belgium , officially the Kingdom of Belgium, is a federal state in Western Europe. It is a founding member of the European Union and hosts the EU's headquarters, and those of several other major international organisations such as NATO.Belgium is also a member of, or affiliated to, many...
.

On October 25, 1997, Yang Chiung-ming and Chen Ming-kuo each had their left arms severed below the shoulder during a massive Tug-of-War event in Taipei
Taipei
Taipei City is the capital of the Republic of China and the central city of the largest metropolitan area of Taiwan. Situated at the northern tip of the island, Taipei is located on the Tamsui River, and is about 25 km southwest of Keelung, its port on the Pacific Ocean...
, Taiwan
Taiwan
Taiwan , also known, especially in the past, as Formosa , is the largest island of the same-named island group of East Asia in the western Pacific Ocean and located off the southeastern coast of mainland China. The island forms over 99% of the current territory of the Republic of China following...
. The event, held at a park along the Keelung River in Taipei in celebration of Retrocession Day (the 52nd anniversary of the end of the Japanese colonial rule in Taiwan), involved over 1,600 participants whose combined strength exerted over 80,000 kg (176,000 lb) of force on a 5 cm (2 inch) nylon rope that could only withstand a maximum of 26,000 kg (57,000 lb). The rope immediately snapped and the sheer rebounding force of the broken rope tore off the men's arms. Both men were immediately taken to a nearby hospital where their arms were successfully reattached. Reports of the incident had evolved into an urban legend incorrectly stating that the men had their arms wrapped around the rope; in fact, neither man had his arm wrapped around the rope, meaning that the rebounding force of the rope was solely responsible for the injuries.

In the German town of Westernohe
Westernohe
Westernohe is an Ortsgemeinde – a community belonging to a Verbandsgemeinde – in the Westerwaldkreis in Rhineland-Palatinate, Germany.-Location:...
650 young scouts participated in a tug of war in 1995. When the rope broke, only 30 seconds into the tug, two children were killed and 102 participants suffered injuries. In the related court case the rope was judged to be unsuited for the event.

A retired warden lost four fingers of his left hand during an annual tug-of-war between residents of two counties on September 25, 2010, in Nova Scotia, Canada.