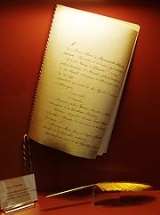 Encyclopedia
The Treaty of Frankfurt was a peace treaty
Peace treaty
A peace treaty is an agreement between two or more hostile parties, usually countries or governments, that formally ends a state of war between the parties...
signed in Frankfurt
Frankfurt
Frankfurt am Main , commonly known simply as Frankfurt, is the largest city in the German state of Hesse and the fifth-largest city in Germany, with a 2010 population of 688,249. The urban area had an estimated population of 2,300,000 in 2010...
on 10 May 1871, at the end of the Franco-Prussian War
Franco-Prussian War
The Franco-Prussian War or Franco-German War, often referred to in France as the 1870 War was a conflict between the Second French Empire and the Kingdom of Prussia. Prussia was aided by the North German Confederation, of which it was a member, and the South German states of Baden, Württemberg and...
.

The treaty did the following:

The treaty also established the terms for the following:

The German military spoke up for control of the Alsace region, up to the Vosges (mountain range) and the area between Thionville (Diedenhofen) and Metz as a requirement for the protection of Germany. Most importantly, the German military regarded control of the route between Thionville and Metz as the most important area of control if there were ever to be a future war with France.

Without a westward shift in the boundary the new empire's frontier with France would have been largely divided between the states of Baden
Baden
Baden is a historical state on the east bank of the Rhine in the southwest of Germany, now the western part of the Baden-Württemberg of Germany....
and Bavaria
Kingdom of Bavaria
The Kingdom of Bavaria was a German state that existed from 1806 to 1918. The Bavarian Elector Maximilian IV Joseph of the House of Wittelsbach became the first King of Bavaria in 1806 as Maximilian I Joseph. The monarchy would remain held by the Wittelsbachs until the kingdom's dissolution in 1918...
, whose governments were less than enthusiastic with the prospect of having a vengeful France on their doorstep. It also would have necessitated the stationing of substantial Imperial forces within these states' borders, possibly compromising their ability to exercise the considerable autonomy the southern states were able to maintain in the unification treaty
Constitution of the German Empire
The Constitution of the German Empire was the basic law of the German Empire of 1871-1919, enacted 16 April 1871. German historians often refer to it as Bismarck's imperial constitution....
. A shift in the frontier alleviated these issues.

The new political border largely (though not entirely) followed the linguistic border. The fact that the majority of the population in the new Imperial Territory (Reichsland) territory spoke Germanic dialects allowed Berlin to justify the annexation on nationalistic grounds.

Natural resources in Alsace-Lorraine
Alsace-Lorraine
The Imperial Territory of Alsace-Lorraine was a territory created by the German Empire in 1871 after it annexed most of Alsace and the Moselle region of Lorraine following its victory in the Franco-Prussian War. The Alsatian part lay in the Rhine Valley on the west bank of the Rhine River and east...
(iron-ore, and coal) do not appear to have played a role in Germany's fight for the areas annexed. Military annexation was the main stated goal along with unification of the German people.
At the same time, France lost 1,447,000 hectares, 1,694 villages and 1,597,000 inhabitants. It also lost 20% of its mining and steel potential.
The treaty of trade of 1862 with Prussia was not renewed but France granted Germany, for trade and navigation, a most-favoured nation
Most favoured nation
In international economic relations and international politics, most favoured nation is a status or level of treatment accorded by one state to another in international trade. The term means the country which is the recipient of this treatment must, nominally, receive equal trade advantages as the...
clause. France would respect the clauses of the Treaty of Frankfurt in their entirety until 1914.

In 1872, The German government told its new citizens that they must declare their choice to be either French, by the first of October, or German, by the same date of 1873. No declaration was necessary if one wanted to become German. If, however, one wanted to remain French, a declaration to that effect was to be made and they had to get out. Children were to have the same nationality as their parents chose. Those from the region who were overseas had to choose by October, 1873. Those who chose became known as the optants, the "choosers".

It resulted in mayhem with thousands of people boarding overcrowded trains to France. Many hoped to get around the law by leaving and then returning, crowding the trains going back. People were camping in the streets of Nancy. In Marseille, a charity was established to help pay the passage for any optants who wanted to emigrate to Algeria
French Algeria
French Algeria lasted from 1830 to 1962, under a variety of governmental systems. From 1848 until independence, the whole Mediterranean region of Algeria was administered as an integral part of France, much like Corsica and Réunion are to this day. The vast arid interior of Algeria, like the rest...
, where the colonial government gave them some of the best land. More than five thousand people took up the offer. In all, the total number of people in the region, in France, and worldwide who chose to remain French came to more than half a million.

This treaty polarized French policy towards Germany for the next forty years. The reconquest of Alsace-Lorraine
Alsace-Lorraine
The Imperial Territory of Alsace-Lorraine was a territory created by the German Empire in 1871 after it annexed most of Alsace and the Moselle region of Lorraine following its victory in the Franco-Prussian War. The Alsatian part lay in the Rhine Valley on the west bank of the Rhine River and east...
, the "lost provinces", became an obsession characterized by a revanchism
Revanchism
Revanchism is a term used since the 1870s to describe a political manifestation of the will to reverse territorial losses incurred by a country, often following a war or social movement. Revanchism draws its strength from patriotic and retributionist thought and is often motivated by economic or...
which would be one of the most powerful motives in France's involvement in World War I
World War I
World War I , which was predominantly called the World War or the Great War from its occurrence until 1939, and the First World War or World War I thereafter, was a major war centred in Europe that began on 28 July 1914 and lasted until 11 November 1918...
.

In 1918, U.S. President Woodrow Wilson
Woodrow Wilson
Thomas Woodrow Wilson was the 28th President of the United States, from 1913 to 1921. A leader of the Progressive Movement, he served as President of Princeton University from 1902 to 1910, and then as the Governor of New Jersey from 1911 to 1913...
addressed the issue as Point 8 in his Fourteen Points
Fourteen Points
The Fourteen Points was a speech given by United States President Woodrow Wilson to a joint session of Congress on January 8, 1918. The address was intended to assure the country that the Great War was being fought for a moral cause and for postwar peace in Europe...
speech.
Alsace-Lorraine returned to France under the 1919 Treaty of Versailles
Treaty of Versailles
The Treaty of Versailles was one of the peace treaties at the end of World War I. It ended the state of war between Germany and the Allied Powers. It was signed on 28 June 1919, exactly five years after the assassination of Archduke Franz Ferdinand. The other Central Powers on the German side of...
.
The source of this article is wikipedia, the free encyclopedia.  The text of this article is licensed under the GFDL.