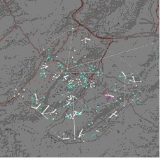 Encyclopedia
Traffic analysis is the process of intercepting and examining messages in order to deduce information from patterns in communication
Communication
Communication is the activity of conveying meaningful information. Communication requires a sender, a message, and an intended recipient, although the receiver need not be present or aware of the sender's intent to communicate at the time of communication; thus communication can occur across vast...
. It can be performed even when the messages are encrypted and cannot be decrypted
Cryptanalysis
Cryptanalysis is the study of methods for obtaining the meaning of encrypted information, without access to the secret information that is normally required to do so. Typically, this involves knowing how the system works and finding a secret key...
. In general, the greater the number of messages observed, or even intercepted and stored, the more can be inferred from the traffic. Traffic analysis can be performed in the context of military intelligence
Military intelligence
Military intelligence is a military discipline that exploits a number of information collection and analysis approaches to provide guidance and direction to commanders in support of their decisions....
or counter-intelligence
Counter-intelligence
Counterintelligence or counter-intelligence refers to efforts made by intelligence organizations to prevent hostile or enemy intelligence organizations from successfully gathering and collecting intelligence against them. National intelligence programs, and, by extension, the overall defenses of...
, and is a concern in computer security
Computer security
Computer security is a branch of computer technology known as information security as applied to computers and networks. The objective of computer security includes protection of information and property from theft, corruption, or natural disaster, while allowing the information and property to...
.

In a military context, traffic analysis is a basic part of signals intelligence
SIGINT
Signals intelligence is intelligence-gathering by interception of signals, whether between people , whether involving electronic signals not directly used in communication , or combinations of the two...
, and can be a source of information about the intentions and actions of the enemy. Representative patterns include:


There is a close relationship between traffic analysis and cryptanalysis
Cryptanalysis
Cryptanalysis is the study of methods for obtaining the meaning of encrypted information, without access to the secret information that is normally required to do so. Typically, this involves knowing how the system works and finding a secret key...
(commonly called codebreaking). Callsigns and addresses are frequently encrypted, requiring assistance in identifying them. Traffic volume can often be a sign of an addressee's importance, giving hints to pending objectives or movements to cryptanalysts.

Traffic-flow security is the use of measures that conceal the presence and properties of valid messages on a network to prevent traffic analysis. This can be done by operational procedures or by the protection resulting from features inherent in some cryptographic equipment. Techniques used include:

The Communications' Metadata Intelligence, or COMINT metadata is a term in COMINT referring to the concept of producing intelligence by analyzing only the technical metadata, hence, is a great practical example for traffic analysis in intelligence.

While traditionally information gathering in COMINT is derived from intercepting transmissions, tapping the target's communications and monitoring the content of conversations, the metadata intelligence is not based on content but on technical communicational data.

Non-content COMINT is usually used to figure information about the user of a certain transmitter, such as locations, contacts, activity volume, routine and its exceptions.

For example, if a certain emitter is known as the radio transmitter of a certain unit, and by using DF (direction finding)
Direction finding
Direction finding refers to the establishment of the direction from which a received signal was transmitted. This can refer to radio or other forms of wireless communication...
tools, the position of the emitter is locatable; hence the changes of locations can be monitored. That way we're able to understand that this certain unit is moving from one point to another, without listening to any orders or reports. If we know that this unit reports back to a command on a certain pattern, and we know that another unit reports on the same pattern to the same command, then the two units are probably related, and that conclusion is based on the metadata of the two units' transmissions, and not on the content of their transmissions.

Using all, or as much of the metadata available is commonly used to build up an Electronic Order of Battle (EOB) – mapping different entities in the battlefield and their connections. Of course the EOB could be built by tapping all the conversations and trying to understand which unit is where, but using the metadata with an automatic analysis tool enables a much faster and accurate EOB build-up that alongside tapping builds a much better and complete picture.

Traffic analysis is also a concern in computer security
Computer security
Computer security is a branch of computer technology known as information security as applied to computers and networks. The objective of computer security includes protection of information and property from theft, corruption, or natural disaster, while allowing the information and property to...
. An attacker can gain important information by monitoring the frequency and timing of network packets. A timing attack on the SSH
Secure Shell
Secure Shell is a network protocol for secure data communication, remote shell services or command execution and other secure network services between two networked computers that it connects via a secure channel over an insecure network: a server and a client...
protocol can use timing information to deduce information about password
Password
A password is a secret word or string of characters that is used for authentication, to prove identity or gain access to a resource . The password should be kept secret from those not allowed access....
s since, during interactive session, SSH transmits each keystroke as a message. The time between keystroke messages can be studied using hidden Markov model
Hidden Markov model
A hidden Markov model is a statistical Markov model in which the system being modeled is assumed to be a Markov process with unobserved states. An HMM can be considered as the simplest dynamic Bayesian network. The mathematics behind the HMM was developed by L. E...
s. Song, et al. claim that it can recover the password fifty times faster than a brute force attack
Brute force attack
In cryptography, a brute-force attack, or exhaustive key search, is a strategy that can, in theory, be used against any encrypted data. Such an attack might be utilized when it is not possible to take advantage of other weaknesses in an encryption system that would make the task easier...
.

Onion routing
Onion routing
Onion routing is a technique for anonymous communication over a computer network. Messages are repeatedly encrypted and then sent through several network nodes called onion routers. Like someone unpeeling an onion, each onion router removes a layer of encryption to uncover routing instructions, and...
systems are used to gain anonymity. Traffic analysis can be used to attack anonymous communication systems like the Tor anonymity network
Tor (anonymity network)
Tor is a system intended to enable online anonymity. Tor client software routes Internet traffic through a worldwide volunteer network of servers in order to conceal a user's location or usage from someone conducting network surveillance or traffic analysis...
. Steven J. Murdoch and George Danezis from University of Cambridge presented

research showing that traffic-analysis allows adversaries to infer which nodes relay the anonymous streams. This reduces the anonymity provided by Tor. They have shown that otherwise unrelated streams can be linked back to the same initiator.

Remailer
Anonymous remailer
An anonymous remailer is a server computer which receives messages with embedded instructions on where to send them next, and which forwards them without revealing where they originally came from...
systems can also be attacked via traffic analysis. If a message is observed going to a remailing server, and an identical-length (if now anonymized) message is seen exiting the server soon after, a traffic analyst may be able to (automatically) connect the sender with the ultimate receiver. Variations of remailer operations exist that can make traffic analysis less effective.

It is difficult to defeat traffic analysis without both encrypting messages and masking the channel. When no actual messages are being sent, the channel can be masked
by sending dummy traffic, similar to the encrypted traffic, thereby keeping bandwidth usage constant
. "It is very hard to hide information about the size or timing of messages. The known solutions require Alice
Alice and Bob
The names Alice and Bob are commonly used placeholder names for archetypal characters in fields such as cryptography and physics. The names are used for convenience; for example, "Alice sends a message to Bob encrypted with his public key" is easier to follow than "Party A sends a message to Party...
to send a continuous stream of messages at the maximum bandwidth
Bandwidth (computing)
In computer networking and computer science, bandwidth, network bandwidth, data bandwidth, or digital bandwidth is a measure of available or consumed data communication resources expressed in bits/second or multiples of it .Note that in textbooks on wireless communications, modem data transmission,...
she will ever use...This might be acceptable for military applications, but it is not for most civilian applications." The military-versus-civilian problems applies in situations where the user is charged for the volume of information sent.

Even for Internet access, where there is not a per-packet charge, ISPs make statistical assumption that connections from user sites will not be busy 100% of the time. The user cannot simply increase the bandwidth of the link, since masking would fill that as well. If masking, which often can be built into end-to-end encryptors, becomes common practice, ISPs will have to change their traffic assumptions.