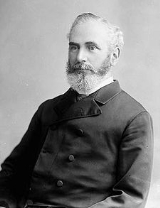 Encyclopedia
Thomas White, was a Canadian
Canada
Canada is a North American country consisting of ten provinces and three territories. Located in the northern part of the continent, it extends from the Atlantic Ocean in the east to the Pacific Ocean in the west, and northward into the Arctic Ocean...
journalist and politician.

He was born in Montreal
Montreal
Montreal is a city in Canada. It is the largest city in the province of Quebec, the second-largest city in Canada and the seventh largest in North America...
, Lower Canada
Lower Canada
The Province of Lower Canada was a British colony on the lower Saint Lawrence River and the shores of the Gulf of Saint Lawrence...
in 1830, the son of Thomas White, a leather merchant who came to Canada from Ireland
Ireland
Ireland is an island to the northwest of continental Europe. It is the third-largest island in Europe and the twentieth-largest island on Earth...
in 1826. White worked at a number of jobs before entering the printing trade with the Queen's Printer in Toronto
Toronto
Toronto is the provincial capital of Ontario and the largest city in Canada. It is located in Southern Ontario on the northwestern shore of Lake Ontario. A relatively modern city, Toronto's history dates back to the late-18th century, when its land was first purchased by the British monarchy from...
around 1850. He moved to Quebec City
Quebec City
Quebec , also Québec, Quebec City or Québec City is the capital of the Canadian province of Quebec and is located within the Capitale-Nationale region. It is the second most populous city in Quebec after Montreal, which is about to the southwest...
in 1851 when that office moved there. In 1852, he assisted Stewart Derbishire
Stewart Derbishire
Stewart Derbishire was the first elected representative for Bytown for the Province of Canada.He was born in England around 1794. He studied law and was called to the bar in 1830. He later worked for a time as a journalist and fought in the Spanish Civil War in 1837...
in editing the Canada Gazette. He married Esther Vine at Quebec in 1853. Later that year, he founded the Peterborough Review with his brother-in-law. He also served as reeve of Peterborough
Peterborough, Ontario
Peterborough is a city on the Otonabee River in southern Ontario, Canada, 125 kilometres northeast of Toronto. The population of the City of Peterborough was 74,898 as of the 2006 census, while the census metropolitan area has a population of 121,428 as of a 2009 estimate. It presently ranks...
. From 1860 to 1864, he studied law with Sidney Smith
Sidney Smith (lawyer)
Sidney Smith was a lawyer and political figure in Canada West.He was born in Port Hope, Upper Canada in 1823, the son of John David Smith. He studied law with his brother, John Shuter, was admitted to the bar in 1844 and set up practice in Cobourg...
at Cobourg
Cobourg, Ontario
Cobourg is a town in the Canadian province of Ontario, located in Southern Ontario 95 km east of Toronto. It is the largest town in Northumberland County. Its nearest neighbour is Port Hope, to the west. It is located along Highway 401 and the former Highway 2...
but soon returned to journalism. In 1864, he moved to Hamilton
Hamilton, Ontario
Hamilton is a port city in the Canadian province of Ontario. Conceived by George Hamilton when he purchased the Durand farm shortly after the War of 1812, Hamilton has become the centre of a densely populated and industrialized region at the west end of Lake Ontario known as the Golden Horseshoe...
and took over the operation of the Daily Spectator and Journal of Commerce
The Hamilton Spectator
The Hamilton Spectator, founded in 1846, is a newspaper published every day but Sunday in Hamilton, Ontario, Canada. The paper has a daily circulation of 105,000 and a daily readership of nearly 260,000.-History:...
. In 1870, with his brother Richard, he bought the Montreal Gazette
The Gazette (Montreal)
The Gazette, often called the Montreal Gazette to avoid ambiguity, is the only English-language daily newspaper published in Montreal, Quebec, Canada, with three other daily English newspapers all having shut down at different times during the second half of the 20th century.-History:In 1778,...
.

He died of pneumonia
Pneumonia
Pneumonia is an inflammatory condition of the lung—especially affecting the microscopic air sacs —associated with fever, chest symptoms, and a lack of air space on a chest X-ray. Pneumonia is typically caused by an infection but there are a number of other causes...
in Ottawa
Ottawa
Ottawa is the capital of Canada, the second largest city in the Province of Ontario, and the fourth largest city in the country. The city is located on the south bank of the Ottawa River in the eastern portion of Southern Ontario...
in 1888.