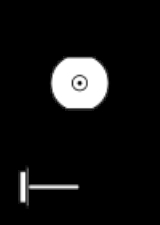 Encyclopedia
The use of a third rail
Third rail
A third rail is a method of providing electric power to a railway train, through a semi-continuous rigid conductor placed alongside or between the rails of a railway track. It is used typically in a mass transit or rapid transit system, which has alignments in its own corridors, fully or almost...
in model railroading is a technique that is sometimes applied in order to facilitate easier wiring.

Early toy train
Toy train
A toy train is a toy that represents a train. It is distinguished from a model train by an emphasis on low cost and durability, rather than scale modeling. A toy train can be as simple as a pull toy that does not even run on track, or it might be operated by clockwork or a battery...
s used two metal
Metal
A metal , is an element, compound, or alloy that is a good conductor of both electricity and heat. Metals are usually malleable and shiny, that is they reflect most of incident light...
rail tracks
Rail tracks
The track on a railway or railroad, also known as the permanent way, is the structure consisting of the rails, fasteners, sleepers and ballast , plus the underlying subgrade...
like most real train
Train
A train is a connected series of vehicles for rail transport that move along a track to transport cargo or passengers from one place to another place. The track usually consists of two rails, but might also be a monorail or maglev guideway.Propulsion for the train is provided by a separate...
s. However, manufacturers quickly found that using a center rail for electric power
Electric power
Electric power is the rate at which electric energy is transferred by an electric circuit. The SI unit of power is the watt.-Circuits:Electric power, like mechanical power, is represented by the letter P in electrical equations...
and the two outer rails for common or ground
Ground (electricity)
In electrical engineering, ground or earth may be the reference point in an electrical circuit from which other voltages are measured, or a common return path for electric current, or a direct physical connection to the Earth....
made the track less prone to electrical short circuit
Short circuit
A short circuit in an electrical circuit that allows a current to travel along an unintended path, often where essentially no electrical impedance is encountered....
s. Thus most scales and gauges that predate H0 scale use three rails for operation.

A key advantage for three-rail track is reverse loops, where a train enters a loop through a turnout
Railroad switch
A railroad switch, turnout or [set of] points is a mechanical installation enabling railway trains to be guided from one track to another at a railway junction....
and then exits through the same turnout in order to change the train's direction. With two-rail track, when the track reverses on itself, this causes a short circuit. With three-rail track, because the center rail remains constant and the outer rails are electrically identical, this causes no problems.

The third rail has also been used to automate
Automation
Automation is the use of control systems and information technologies to reduce the need for human work in the production of goods and services. In the scope of industrialization, automation is a step beyond mechanization...
and animate
Animation
Animation is the rapid display of a sequence of images of 2-D or 3-D artwork or model positions in order to create an illusion of movement. The effect is an optical illusion of motion due to the phenomenon of persistence of vision, and can be created and demonstrated in several ways...
layouts
Model railroad layout
In model railroading, a layout is a diorama containing scale track for operating trains. The size of a layout varies, from small shelf-top designs to ones that fill entire rooms, basements, or whole buildings....
. An accessory, such as a railway signal
Railway signal
A signal is a mechanical or electrical device erected beside a railway line to pass information relating to the state of the line ahead to train/engine drivers. The driver interprets the signal's indication and acts accordingly...
, can be wired to a section of track that has had one of its outer rails insulated
Electrical insulation
thumb|250px|[[Coaxial Cable]] with dielectric insulator supporting a central coreThis article refers to electrical insulation. For insulation of heat, see Thermal insulation...
(not grounded), either at the factory or by a hobby
Hobby
A hobby is a regular activity or interest that is undertaken for pleasure, typically done during one's leisure time.- Etymology :A hobby horse is a wooden or wickerwork toy made to be ridden just like a real horse...
ist. A passing train then grounds the insulated rail, completing the circuit and causing the accessory to operate.

Insulated rails (or rail sections) can also be used to control turnouts, causing the turnout to switch to the position needed by an oncoming train.

Because of this feature, railroad car
Railroad car
A railroad car or railway vehicle , also known as a bogie in Indian English, is a vehicle on a rail transport system that is used for the carrying of cargo or passengers. Cars can be coupled together into a train and hauled by one or more locomotives...
s intended for three-rail operation will not work on two-rail track unless their wheels are first insulated from each other. Cars intended for two-rail track will operate on three-rail track, but they will not activate controls wired to an insulated rail. Conversion of three-rail cars for two-rail operation, or vice-versa, is thus a common practice among hobbyists. It requires either replacing the bogie
Bogie
A bogie is a wheeled wagon or trolley. In mechanics terms, a bogie is a chassis or framework carrying wheels, attached to a vehicle. It can be fixed in place, as on a cargo truck, mounted on a swivel, as on a railway carriage/car or locomotive, or sprung as in the suspension of a caterpillar...
s (wheel assemblies) on the car, or replacing metal axles with axles made of a non-conductive material.

The main disadvantage of three-rail track is its lack of realism. While some real-world trains do use a third rail
Third rail
A third rail is a method of providing electric power to a railway train, through a semi-continuous rigid conductor placed alongside or between the rails of a railway track. It is used typically in a mass transit or rapid transit system, which has alignments in its own corridors, fully or almost...
, the prototypes for the majority of model railroad operations do not. Lionel
Lionel, LLC
Lionel, LLC is a designer and importer of toy trains and model railroads, based in Chesterfield Township, Michigan. Its roots lie in the 1969 purchase of the Lionel product line by cereal conglomerate General Mills....
tried to improve this situation in the late 1950s with its Super O track, which blackened the middle rail and made it thinner in order to make it less visible. Other O scale
O scale
O scale is a scale commonly used for toy trains and model railroading. Originally introduced by German toy manufacturer Märklin around 1900, by the 1930s three-rail alternating current O gauge was the most common model railroad scale in the United States and remained so until the early 1960s...
manufacturers use similar techniques today.

Märklin
Märklin
Gebr. Märklin & Cie. GmbH or Märklin is a German toy company. The company was founded in 1859 and is based at Göppingen in Baden-Wurttemberg. Although it originally specialised in doll house accessories, today it is best known for model railways and technical toys...
uses a 'phantom
Ghost
In traditional belief and fiction, a ghost is the soul or spirit of a deceased person or animal that can appear, in visible form or other manifestation, to the living. Descriptions of the apparition of ghosts vary widely from an invisible presence to translucent or barely visible wispy shapes, to...
' third rail, where the middle rail is concealed in the ties
Railroad tie
A railroad tie/railway tie , or railway sleeper is a rectangular item used to support the rails in railroad tracks...
with only studs protruding, giving the advantages of three-rail operation without seriously detracting from its realism. This is stud contact electrification for model railways and is often used on garden railway
Garden railway
A garden railroad or garden railway is a model railway system set up outdoors in a garden. While G is the most popular scale for garden railroads, 16 mm scale has a dedicated and growing following especially in the UK. Model locomotives in this scale are often live steam scale models of British...
systems. Garden railways often have a mixture of electrical and real steam locomotives. while it is possible, insulating model steam locomotive
Steam locomotive
A steam locomotive is a railway locomotive that produces its power through a steam engine. These locomotives are fueled by burning some combustible material, usually coal, wood or oil, to produce steam in a boiler, which drives the steam engine...
s to run on two rail electrification systems is problematic. In practice the stud system outdoors has been found to be more resistant to continuity problems caused by the outdoor environment.

On a simple, non computer
Computer
A computer is a programmable machine designed to sequentially and automatically carry out a sequence of arithmetic or logical operations. The particular sequence of operations can be changed readily, allowing the computer to solve more than one kind of problem...
ised layout only one train can run independently on either a two or three-rail system (two trains if combined with overhead lines
Overhead lines
Overhead lines or overhead wires are used to transmit electrical energy to trams, trolleybuses or trains at a distance from the energy supply point...
). On the insulated three-rail type, two trains can run independently (three trains if combined with overhead lines).