The Story of the Kelly Gang
Topic Home
Discussion
0

Encyclopedia
The Story of the Kelly Gang is a 1906
1906 in film
The year 1906 in film involved some significant events.-Events:*26 December - The world's first feature film, The Story of the Kelly Gang, is released.-Films released in 1906:*The Automobile Thieves*The Dream of a Rarebit Fiend...
Australia
Australia
Australia , officially the Commonwealth of Australia, is a country in the Southern Hemisphere comprising the mainland of the Australian continent, the island of Tasmania, and numerous smaller islands in the Indian and Pacific Oceans. It is the world's sixth-largest country by total area...
n film that traces the life of the legendary bushranger
Bushranger
Bushrangers, or bush rangers, originally referred to runaway convicts in the early years of the British settlement of Australia who had the survival skills necessary to use the Australian bush as a refuge to hide from the authorities...
Ned Kelly
Ned Kelly
Edward "Ned" Kelly was an Irish Australian bushranger. He is considered by some to be merely a cold-blooded cop killer — others, however, consider him to be a folk hero and symbol of Irish Australian resistance against the Anglo-Australian ruling class.Kelly was born in Victoria to an Irish...
(1855–1880). It was written and directed by Charles Tait
Charles Tait (film director)
Charles Tait , together with two of his brothers, was an Australian concert, film and theatrical entrepreneur, but his most notable achievement was as the director and writer of The Story of the Kelly Gang, an Australian film, regarded as the world's first feature length film...
. The film ran for more than an hour, and was the longest narrative film yet seen in Australia, and the world. Its approximate reel length was 4,000 feet (1,200 m). It was first shown at the Athenaeum Hall in Collins Street, Melbourne, Australia on 26 December 1906 and in the UK in January 1908.

It was directed by Charles Tait and much of the film was shot on his wife's family's property at Heidelberg. His wife Elizabeth played the role of Kate Kelly, and their children and brothers all took part. The film, which cost £
Australian pound
The pound was the currency of Australia from 1910 until 13 February 1966, when it was replaced by the Australian dollar. It was subdivided into 20 shillings, each of 12 pence.- Earlier Australian currencies :...
1,000, was extremely successful, and was said to have returned at least £25,000 to its producers.

Only about 10 minutes were known to have survived. In November 2006, the National Film and Sound Archive
National Film and Sound Archive
The National Film and Sound Archive is Australia’s audiovisual archive, responsible for developing, preserving, maintaining, promoting and providing access to a national collection of audiovisual materials and related items...
released a new digital restoration which incorporated 11 minutes of material recently discovered in the United Kingdom. The restoration now is 17 minutes long and includes the key scene of Kelly's last stand. However, a copy of the programme booklet has also survived, containing both extracts from contemporary newspaper reports of the capture of the gang, and a synopsis of the film, in six 'scenes'. The latter provided audiences with the sort of information later provided by intertitle
Intertitle
In motion pictures, an intertitle is a piece of filmed, printed text edited into the midst of the photographed action, at various points, generally to convey character dialogue, or descriptive narrative material related to, but not necessarily covered by, the material photographed.Intertitles...
s, and can help historians imagine what the film may have been like.

In 2007 The Story of the Kelly Gang was inscribed on the UNESCO
UNESCO
The United Nations Educational, Scientific and Cultural Organization is a specialized agency of the United Nations...
Memory of the World Register  for being the world's first full-length feature film.

The Story of the Kelly Gangs tone is of sorrow, depicting Ned Kelly as "the Last of the Bushrangers, and his friends Dan Kelly, Steve Hart and Joe Byrne," presenting the police hiding under the bed when Aaron Sherritt is shot ('This is the Only Blot on the Police,') and portraying school master Curnow's action of warning the train as heroic ('Thank God, he Saved the Train.')

Among the surviving images are two scenes that suggest considerable sophistication for that time. The scene of the police shooting parrots in the bush skillfully positions the shooter in the middle ground to the left of the image, firing upwards toward the far right, with the gang watching him from close foreground. The capture of Ned is shot from the viewpoint of the police, as Ned advances, an impressive figure weaving towards them under the weight of his armour and the shock of the bullets.

According to the synopsis given in the surviving program, the film originally comprised six sequences. These provided a loose narrative based on the Kelly gang story.

Some confusion regarding the plot has emerged as a result of a variant poster from the film dating from 1910. Its similar (but different) photos suggest that either the film was being added to, or altered, or an entirely new version was made by Johnson and Gibson, as the poster proclaims. Fragments of another version of the story, “the Perth fragment,” shows Aaron Sherritt being shot outside, in front of an obviously painted canvas flat. This now appears to be from a different film altogether, perhaps a cheap imitation by a theatrical company, keen to cash in on the success of the original. 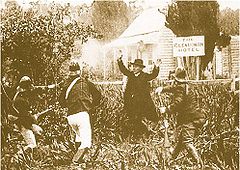 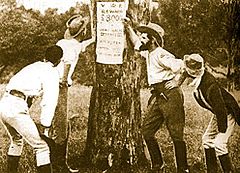 The first showing was in Melbourne at the Athenaeum Hall
Athenaeum, Melbourne
The Athenaeum or Melbourne Athenaeum is one of the oldest public institutions in Victoria, Australia, founded in 1839. The first President was Captain William Lonsdale, the first Patron was the Superintendent of Port Philip, Charles La Trobe and the first books were donated by Vice-President Henry...
on 26 December 1906 to much controversy. Many groups at the time, including some politicians and the police interpreted the film as glorifying criminals and in Benalla and Wangaratta the film was banned in 1907, and then again in Victoria in 1912. The film toured Australia for over 20 years and also showed in New Zealand and Britain. The backers and exhibitors made "a fortune" from the film, perhaps in excess of £25,000.