Encyclopedia
Heidelberg is a suburb in Melbourne
Melbourne
Melbourne is the capital and most populous city in the state of Victoria, and the second most populous city in Australia. The Melbourne City Centre is the hub of the greater metropolitan area and the Census statistical division—of which "Melbourne" is the common name. As of June 2009, the greater...
, Victoria
Victoria (Australia)
Victoria is the second most populous state in Australia. Geographically the smallest mainland state, Victoria is bordered by New South Wales, South Australia, and Tasmania on Boundary Islet to the north, west and south respectively....
, Australia
Australia
Australia , officially the Commonwealth of Australia, is a country in the Southern Hemisphere comprising the mainland of the Australian continent, the island of Tasmania, and numerous smaller islands in the Indian and Pacific Oceans. It is the world's sixth-largest country by total area...
, 11 km north-east from Melbourne's central business district
Melbourne city centre
Melbourne City Centre is an area of Melbourne in Victoria, Australia. It is not to be confused with the larger local government area of the City of Melbourne...
. Its Local Government Area is the City of Banyule.

Once a large city on Melbourne's fringe, Heidelberg was absorbed into Melbourne as part of the metropolis postwar northward expansion. Leafy Heidelberg once had its own historic Central Business District
Central business district
A central business district is the commercial and often geographic heart of a city. In North America this part of a city is commonly referred to as "downtown" or "city center"...
and its own municipality in the former City of Heidelberg
City of Heidelberg
The City of Heidelberg was a Local Government Area located about northeast of Melbourne, the state capital of Victoria, Australia. The city covered an area of , and existed from 1840 until 1994.-History:...
.

It was named after the German
Germany
Germany , officially the Federal Republic of Germany , is a federal parliamentary republic in Europe. The country consists of 16 states while the capital and largest city is Berlin. Germany covers an area of 357,021 km2 and has a largely temperate seasonal climate...
city of Heidelberg
Heidelberg
-Early history:Between 600,000 and 200,000 years ago, "Heidelberg Man" died at nearby Mauer. His jaw bone was discovered in 1907; with scientific dating, his remains were determined to be the earliest evidence of human life in Europe. In the 5th century BC, a Celtic fortress of refuge and place of...
.

The land at Heidelberg was sold by Crown auction in 1838, making it one of the earliest rural allotments, after Central Melbourne's first land sale on 1 June 1837. By 1840, Warrangal was established as a surveyed township; the name referring to the aboriginal term for eagle's nest. Eventually, the name Warringal was changed to Heidelberg by a land agent, after the German
Germany
Germany , officially the Federal Republic of Germany , is a federal parliamentary republic in Europe. The country consists of 16 states while the capital and largest city is Berlin. Germany covers an area of 357,021 km2 and has a largely temperate seasonal climate...
city of Heidelberg
Heidelberg
-Early history:Between 600,000 and 200,000 years ago, "Heidelberg Man" died at nearby Mauer. His jaw bone was discovered in 1907; with scientific dating, his remains were determined to be the earliest evidence of human life in Europe. In the 5th century BC, a Celtic fortress of refuge and place of...
. The Heidelberg City Council proposed a name change during WWII
World War II
World War II, or the Second World War , was a global conflict lasting from 1939 to 1945, involving most of the world's nations—including all of the great powers—eventually forming two opposing military alliances: the Allies and the Axis...
, but it was rejected after public outcry.

When it was settled, Heidelberg was reached by track from Melbourne via North Fitzroy, and in 1841 the Heidelberg Road Trust was formed. As a form of local government, it preceded the Melbourne town council. By the late 1840s, the road had a toll bar at Merri Creek, and a macadamised surface. It became a tourist attraction, enhancing Heidelberg's reputation as a desirable place for views, excursions and rural estates. Cattle overlander Joseph Hawdon built his gothic Banyule homestead in 1846, overlooking the Yarra Valley
Yarra Valley
The Yarra Valley is the name given to the region surrounding the Yarra River in Victoria, Australia. The river originates approximately 90 kilometres east of the City of Melbourne and flows towards it and out into Port Phillip Bay...
.

The Post Office opened on 19 October 1853 as Warringal, and was renamed Heidelberg in 1865. Heidelberg was proclaimed a shire on 27 January 1871.

Heidelberg was proclaimed a City on 11 April 1934, but its rural space exceeded the urban area. The Heidelberg Town Hall
Heidelberg Town Hall
Heidelberg Town Hall is a civic building located on Upper Heidelberg Road in Ivanhoe, a suburb of Melbourne, Australia. It is now more commonly known as The Centre Ivanhoe...
was built in 1937. Subdivision and settlement clustered around Heidelberg Road and the Melbourne to Hurstbridge railway line which bisected the municipality in a generally north-east direction. Along that line are Darebin, Ivanhoe, Eaglemont, Heidelberg, Rosanna, Macleod, Watsonia and Greensborough. Mont Park was reached by a spur line from Macleod. Heidelberg West, unserved by railway, was sparsely settled until the 1950s when it was built on by the Housing Commission of Victoria
Housing Commission of Victoria
The Housing Commission of Victoria was a State Government body responsible for public housing in Victoria, Australia...
, and provided the site for the athletes' village for the 1956 Melbourne Olympic Games.

By the 1970s
1970s
File:1970s decade montage.png|From left, clockwise: US President Richard Nixon doing the V for Victory sign after his resignation from office after the Watergate scandal in 1974; Refugees aboard a US naval boat after the Fall of Saigon, leading to the end of the Vietnam War in 1975; The 1973 oil...
, the residential development of the Heidelberg municipality was complete, except for some areas in Viewbank and Lower Plenty. The shopping areas were mostly strips, but a free-standing centre was built in Heidelberg West in 1956, to a design by the Housing Commission which drew on American trends.

Evidence of Heidelberg's long history and early settlement can be found throughout the municipality. The cemetery on Upper Heidelberg Road contains some of the oldest graves in Victoria. An even older cemetery, the size of a house block near the corner of St James Road and Hawdon Street, contains graves dating back before the establishment in 1851 of the Victorian colony. The local primary school opened in 1854. Banyule Homestead, which still stands today, was built in 1846 and the Old England Hotel on Lower Heidelberg Road first opened its doors in 1848.

The Heidelberg Shopping Centre, known as "Burgundy Street" has recently been revived. It had become rundown in the 1980s, but a new supermarket, and many trendy cafes have made the area much more liveable; as a result, house prices have increased dramatically.

"Burgundy Street" is now known as Heidelberg Central Shopping Precinct and has over 230 retail/commercial and professional businesses. Over 1 million dollars has been spent over the last 7 years to upgrade the infrastructure of the Precinct. e.g. Aerial bundling of overhead power lines, resurfacing of the footpaths and roadways, installation of trees, seating, bollards, bike racks and rubbish bins. Painting of all street furniture in the Precinct to 'burgundy' to suggest the boundaries of the retail strip. 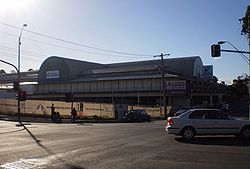 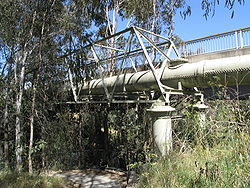 Private car is the main form of transport in Heidelberg. The main roads are Burgundy Street (also the main street
Main Street
Main Street is the metonym for a generic street name of the primary retail street of a village, town, or small city in many parts of the world...
), Rosanna Road, Upper Heidelberg Road and Banksia Street (which flows from the Route 40 highway
Route 40, Melbourne
Route 40, or the Bell / Springvale State Highway is the longest urban highway in Melbourne linking Tullamarine Freeway and the Nepean Highway, allotted metropolitan route ....
).

There is a network of on-road and segregated bicycle facilities, including the Main Yarra Trail
Main Yarra Trail
The Yarra Trail is a shared use path for cyclists and pedestrians, which follows the Yarra River through the north eastern suburbs of Melbourne, Victoria, Australia....
.

Heidelberg United
Heidelberg United
Heidelberg United Football Club is a football club based in the northern Melbourne suburb of Heidelberg, Victoria, Australia...
are a soccer club based in the suburb which competes in the Victorian Premier League
Victorian Premier League
The Victorian Premier League is the highest State level association football competition in Victoria, Australia, and second highest nationally after the A-League...
which plays second tier to the A-League
A-League
The A-League is the top Australasian professional football league. Run by Australian governing body Football Federation Australia , it was founded in 2004 following the folding of the National Soccer League and staged its inaugural season in 2005–06. It is sponsored by Hyundai Motor Company...
. They once competed in the National Soccer League
National Soccer League
The National Soccer League is the former national association football competition in Australasia, overseen by Soccer Australia and later the Australian Soccer Association. The NSL spanned 28 seasons from its inception in 1977, until its demise in 2004...
.

Golfers play at the course of the Heidelberg Golf Club on Main Road in the neighbouring suburb of Lower Plenty.