Encyclopedia
Mitcham is a suburb in Melbourne
Melbourne
Melbourne is the capital and most populous city in the state of Victoria, and the second most populous city in Australia. The Melbourne City Centre is the hub of the greater metropolitan area and the Census statistical division—of which "Melbourne" is the common name. As of June 2009, the greater...
, Victoria
Victoria (Australia)
Victoria is the second most populous state in Australia. Geographically the smallest mainland state, Victoria is bordered by New South Wales, South Australia, and Tasmania on Boundary Islet to the north, west and south respectively....
, Australia
Australia
Australia , officially the Commonwealth of Australia, is a country in the Southern Hemisphere comprising the mainland of the Australian continent, the island of Tasmania, and numerous smaller islands in the Indian and Pacific Oceans. It is the world's sixth-largest country by total area...
, 20 km east from Melbourne's central business district
Melbourne city centre
Melbourne City Centre is an area of Melbourne in Victoria, Australia. It is not to be confused with the larger local government area of the City of Melbourne...
. Its Local Government Area is the City of Whitehorse
City of Whitehorse
The City of Whitehorse is a Local Government Area in Victoria, Australia. It is located in the eastern suburbs of Melbourne. It has an area of and has a estimated population of 155,725 people....
. At the 2006 Census, Mitcham had a population of 14,211.

Mitcham was named after Mitcham Grove, a farm property owned by William Slater who grew roses and herbs for perfumes and remedies. From its settlement in the 1860s, the Mitcham area was generally used for orchards, brickmaking and pottery. Mitcham Post Office opened on 1 June 1884.

However, since the 1950s post war expansion it has become a suburban area.

The main shopping precinct is centered around the intersection of Whitehorse Road and Mitcham Road, and features a supermarket cafes, fast food outlets and speciality shops.

Mitcham also has a number of parks and reserves, including: 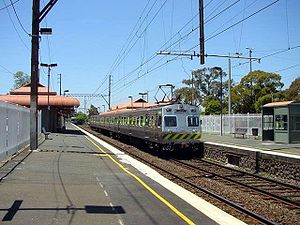 The main north-south roads roads are Mitcham Road and Heatherdale Road. The main east-west road is Whitehorse Road (Maroondah Highway
Maroondah Highway
Maroondah Highway , is a major east-west thoroughfare in the eastern suburbs of Melbourne and a highway servicing the lower alpine region Victoria, Australia.-History:...
) which connects with the EastLink
EastLink, Melbourne
EastLink is a A$2.5 billion tolled freeway linking a large area through the eastern and south-eastern suburbs of Melbourne, Australia. It is a part of Melbourne's Metropolitan Ring Road project....
tolled freeway which skirts the northern and eastern boundaries of the suburb.

Mitcham has two railways stations, Mitcham
Mitcham railway station, Melbourne
Mitcham is a railway station in Melbourne, Victoria, Australia, located in the suburb of Mitcham, on the Lilydale and Belgrave railway lines. Mitcham is classed as a Premium Station and is in Metcard Zone 2.-Facilities:...
and Heatherdale, both of which are on the Belgrave and Lilydale lines.

There are a number of bus routes which link the suburb to surrounding areas. Many of these connect with Mitcham railway station.

Schwerkolt Cottage is a pioneer cottage (circa 1880s) near the Yarran Dheran bushland park. The cottage and other buildings are now a local history museum. The cottage is surrounded by 2.25 hectares of gardens and bushland. The stone cottage has been restored to its original condition and furnished in a style of the period. The Opening Hours: Weekends and public holidays, 2.00pm-5.00pm and Group Tours by appointment on weekdays only.

Mitcham was the home of comedian Dave O'Neil
Dave O'Neil
Dave O'Neil is a Melbourne-based stand-up comedian, actor, writer and radio personality.-Early career:Dave was a Cub, Scout, Venturer and Rover. His father Kevin is still the Group Leader at the 1st/3rd Mitcham Scout Group....
, The Volvos musicians Heynes Arms & AC Fanta, Sforzando (band)
Sforzando (band)
Sforzando are a band from Melbourne, Australia who describe themselves as a "8-piece pirate orchestra" . Their musical style combines elements of punk, Western European folk music and sea shanties to create "a soundscape for the ocean", and there is notable Irish and Balkan influences on their sound...
lead vocalist, poet and writer Quincy Hall, actor brothers Brett and Trevor Lewis, playwright Sandra Long, writer Michael McArthur, director James McArthur, sculptor Joanne Mott and abstract artist 'Egghatch'. These and other Mitcham-raised artists have become collectively known as the Mitcham Connection. During the 1996 Melbourne International Comedy Festival
Melbourne International Comedy Festival
The Melbourne International Comedy Festival is the third-largest international comedy festival in the world and the largest cultural event in Australia. Established in 1987, it takes place annually in Melbourne over four weeks in April typically opening on or around April Fool's Day...
, several of the Mitcham Connection artists, namely Sandra Long, the McArthur brothers and Quincy Hall, collaborated with several other playwrights and stage directors to produce the extraordinary show To Go At Something Bald-Headed. The show was composed of four plays including The Harry Blade Show featuring AC Fanta, Torquil Neilson
Torquil Neilson
-Biography:Born in London and raised in Melbourne, Neilson currently resides in Sydney where he has lived since 2003. He is best known for his role as Jason Cotter in Frontline which he played from 1994 to 1997. Neilson's other television roles include Blue Heelers, The Secret Life of Us and Love...
and Anthony Rive. The show was officially launched by Democrats Senator Lyn Allison
Lyn Allison
Lynette Fay "Lyn" Allison is an Australian politician. She was a member of the Australian Senate from 1996 to 2008, representing the state of Victoria. She was the last federal parliamentary leader of the Australian Democrats....
.