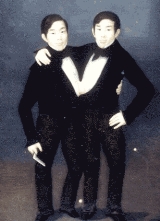 Encyclopedia
A Thai American is an American
Americans
The people of the United States, also known as simply Americans or American people, are the inhabitants or citizens of the United States. The United States is a multi-ethnic nation, home to people of different ethnic and national backgrounds...
of whose parents or grandparents came from Thailand
Thailand
Thailand , officially the Kingdom of Thailand , formerly known as Siam , is a country located at the centre of the Indochina peninsula and Southeast Asia. It is bordered to the north by Burma and Laos, to the east by Laos and Cambodia, to the south by the Gulf of Thailand and Malaysia, and to the...
. Many of them may in fact be of Thai Chinese
Thai Chinese
The Thai Chinese are an overseas Chinese community who live in Thailand. Thailand is home to the largest, oldest, most prominent, and most integrated overseas Chinese community in the world with a population of approximately 9.5 million people...
or at least part Chinese ancestry, but they are still considered to be Thais.

The first Thai to study in the United States was He Thien (original name "Thien Hee"), a Thai Chinese who was brought by a returning American missionary
Missionary
A missionary is a member of a religious group sent into an area to do evangelism or ministries of service, such as education, literacy, social justice, health care and economic development. The word "mission" originates from 1598 when the Jesuits sent members abroad, derived from the Latin...
. He Thien graduated from a New York
New York
New York is a state in the Northeastern region of the United States. It is the nation's third most populous state. New York is bordered by New Jersey and Pennsylvania to the south, and by Connecticut, Massachusetts and Vermont to the east...
medical college in 1871. He then returned to Siam, eventually adopting a Thai name. He was the father of Pote Sarasin
Pote Sarasin
Pote Sarasin was a Thai diplomat and politician. He served as foreign minister from 1949 to 1951 and then served as ambassador to the United States. In September 1957 when Sarit Thanarat seized power in a military coup, he appointed Pote to be the acting prime minister. He resigned in December 1957...
, a former Prime minister of Thailand
Prime Minister of Thailand
The Prime Minister of Thailand is the head of government of Thailand. The Prime Minister is also the chairman of the Cabinet of Thailand. The post has existed since the Revolution of 1932, when the country became a constitutional monarchy....
.

Thai immigration to the United States proceeded very slowly. It began in earnest during and after the Vietnam War
Vietnam War
The Vietnam War was a Cold War-era military conflict that occurred in Vietnam, Laos, and Cambodia from 1 November 1955 to the fall of Saigon on 30 April 1975. This war followed the First Indochina War and was fought between North Vietnam, supported by its communist allies, and the government of...
, in which Thailand was an ally of the U.S. and South Vietnam. Records show that in the decade between 1960 and 1970, some 5,000 Thais immigrated to the United States. In the following decade, the number increased to 44,000. From 1981 to 1990, approximately 64,400 Thai citizens moved to the United States.

Los Angeles
Los Ángeles
Los Ángeles is the capital of the province of Biobío, in the commune of the same name, in Region VIII , in the center-south of Chile. It is located between the Laja and Biobío rivers. The population is 123,445 inhabitants...
, California
California
California is a state located on the West Coast of the United States. It is by far the most populous U.S. state, and the third-largest by land area...
has the largest Thai population outside of Asia. It is home to the world's first Thai Town
Thai Town, Los Angeles, California
Thai Town is a neighborhood of Los Angeles centered along Hollywood Boulevard between Normandie Avenue and Western Avenue in East Hollywood....
. In 2002, it was estimated that over 80,000 Thais and Thai Americans live in Los Angeles. Other large Thai communities are in Clark County
Clark County
Clark County is the name of twelve counties in the United States of America. Most, though not all, are named after two brothers: military hero George Rogers Clark in the Midwest, and explorer William Clark in the West.* Clark County, Arkansas...
, Nevada
Nevada
Nevada is a state in the western, mountain west, and southwestern regions of the United States. With an area of and a population of about 2.7 million, it is the 7th-largest and 35th-most populous state. Over two-thirds of Nevada's people live in the Las Vegas metropolitan area, which contains its...
; Cook County
Cook County
- Counties :*Cook County, Georgia, US*Cook County, Illinois*Cook County, Minnesota, US*Cook County, New South Wales, Australia*Cook County, New Zealand, one of the former counties of New Zealand on the North Island...
, Illinois
Illinois
Illinois is the fifth-most populous state of the United States of America, and is often noted for being a microcosm of the entire country. With Chicago in the northeast, small industrial cities and great agricultural productivity in central and northern Illinois, and natural resources like coal,...
; Orange County, California
Orange County, California
Orange County is a county in the U.S. state of California. Its county seat is Santa Ana. As of the 2010 census, its population was 3,010,232, up from 2,846,293 at the 2000 census, making it the third most populous county in California, behind Los Angeles County and San Diego County...
; San Bernadino County, California; San Francisco, California
San Francisco, California
San Francisco , officially the City and County of San Francisco, is the financial, cultural, and transportation center of the San Francisco Bay Area, a region of 7.15 million people which includes San Jose and Oakland...
; and Fairfax County, Virginia
Fairfax County, Virginia
Fairfax County is a county in Virginia, in the United States. Per the 2010 Census, the population of the county is 1,081,726, making it the most populous jurisdiction in the Commonwealth of Virginia, with 13.5% of Virginia's population...
.

Thai Americans are famous for bringing Thai cooking to the United States. Thai cuisine is popular across the country. Even non-Thai restaurants may include Thai-influenced dishes on their menu.

Thai culture's prominence in the United States is disproportionate to their numbers. The stationing of American troops in Thailand during the Vietnam War
Vietnam War
The Vietnam War was a Cold War-era military conflict that occurred in Vietnam, Laos, and Cambodia from 1 November 1955 to the fall of Saigon on 30 April 1975. This war followed the First Indochina War and was fought between North Vietnam, supported by its communist allies, and the government of...
exposed the GIs to Thai culture and cuisine, and many of them came home with Thai wives.

In 2003, two Thai Americans ran in municipal elections, one in Anaheim, California
Anaheim, California
Anaheim is a city in Orange County, California. As of the 2010 United States Census, the city population was about 365,463, making it the most populated city in Orange County, the 10th most-populated city in California, and ranked 54th in the United States...
, the other in Houston, Texas
Houston, Texas
Houston is the fourth-largest city in the United States, and the largest city in the state of Texas. According to the 2010 U.S. Census, the city had a population of 2.1 million people within an area of . Houston is the seat of Harris County and the economic center of , which is the ...
. Both lost.
However, on November 7, 2006, Gorpat Henry Charoen became the first U.S. official of Thai origin, when he was elected to the La Palma
La Palma, California
La Palma is a city located in northern Orange County, California. Incorporated on October 26, 1955, the population was 15,408 at the 2000 census...
City Council in California. On December 18, 2007, he became the first Thai American mayor of a U.S. city.