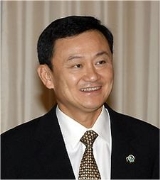 Overview
Thaksin Shinawatra is a Thai
Thai
When used as an adjective, Thai refers to anything that originates from Thailand. As a noun it may refer to:* Thai language, a Tai-Kadai language spoken mainly in and around Thailand* Thai people, the dominant ethnic group of Thailand...
businessman and politician, who was Prime Minister of Thailand from 2001 to 2006, when he was overthrown
Deposition (politics)
Deposition by political means concerns the removal of a politician or monarch. It may be done by coup, impeachment, invasion or forced abdication...
in a military coup.

Thaksin founded Advanced Info Service
Advanced Info Service
Advanced Info Service PCL is Thailand's largest GSM mobile phone operator with 28.8 million customers as of February 2010. Founded in April 1986, AIS started off as a computer rental business...
, Thailand's most successful mobile phone operator, and became a billionaire
Billionaire
A billionaire, in countries that use the short scale number naming system, is a person who has a net worth of at least one billion units of a given currency, usually the United States dollar, Euro, or Pound sterling. Forbes magazine updates a complete list of U.S. dollar billionaires around the...
. Thaksin entered politics
Politics of Thailand
The politics of Thailand are currently conducted within the framework of a constitutional monarchy, whereby the Prime Minister is the head of government and a hereditary monarch is head of state. The judiciary is independent of the executive and the legislative branches.Thai kingdoms and late...
in 1994 under Phalang Dharma Party
Phalang Dharma Party
The Phalang Dharma Party is a Thai political party founded by Chamlong Srimuang and supporters of the Santi Asoke sect of Buddhism in 1988.After 1992, it was led by business tycoon Boonchu Rojanastien and then future Prime Minister Thaksin Shinawatra. The party was known for its staunch opposition...
, left the party along with many of its MPs
House of Representatives of Thailand
The House of Representatives of the Kingdom of Thailand is the lower house of the National Assembly of Thailand, the legislative branch of the Thai Government. The system of government of Thailand is that of a Constitutional Monarchy and a Parliamentary Democracy. The system of the Thai...
in 1996, and founded the populist
Populism
Populism can be defined as an ideology, political philosophy, or type of discourse. Generally, a common theme compares "the people" against "the elite", and urges social and political system changes. It can also be defined as a rhetorical style employed by members of various political or social...
Thai Rak Thai
Thai Rak Thai
The Thai Rak Thai Party was a Thai political party that was officially banned on May 30, 2007, by the Constitutional Court of Thailand due to violations of electoral laws during the 2006 legislative elections. From 2001 to 2006, it was the ruling party under Prime Minister and its founder Thaksin...
(TRT) party in 1998.