Encyclopedia
Tenayuca is a pre-Columbian
Pre-Columbian
The pre-Columbian era incorporates all period subdivisions in the history and prehistory of the Americas before the appearance of significant European influences on the American continents, spanning the time of the original settlement in the Upper Paleolithic period to European colonization during...
Mesoamerica
Mesoamerica
Mesoamerica is a region and culture area in the Americas, extending approximately from central Mexico to Belize, Guatemala, El Salvador, Honduras, Nicaragua, and Costa Rica, within which a number of pre-Columbian societies flourished before the Spanish colonization of the Americas in the 15th and...
n archaeological site in the Valley of Mexico
Valley of Mexico
The Valley of Mexico is a highlands plateau in central Mexico roughly coterminous with the present-day Distrito Federal and the eastern half of the State of Mexico. Surrounded by mountains and volcanoes, the Valley of Mexico was a centre for several pre-Columbian civilizations, including...
. In the Postclassic period of Mesoamerican chronology
Mesoamerican chronology
Mesoamerican chronology divides the history of pre-Columbian Mesoamerica into several periods: the Paleo-Indian , the Archaic , the Preclassic , the Classic , and the Postclassic...
Tenayuca was a settlement on the former shoreline of the western arm of Lake Texcoco
Lake Texcoco
Lake Texcoco was a natural lake formation within the Valley of Mexico. The Aztecs built the city of Tenochtitlan on an island in the lake. The Spaniards built Mexico City over Tenochtitlan...
, located approximately 10km
Kilometre
The kilometre is a unit of length in the metric system, equal to one thousand metres and is therefore exactly equal to the distance travelled by light in free space in of a second...
to the northwest of Tenochtitlan (the heart of present-day Mexico City
Mexico City
Mexico City is the Federal District , capital of Mexico and seat of the federal powers of the Mexican Union. It is a federal entity within Mexico which is not part of any one of the 31 Mexican states but belongs to the federation as a whole...
). Tenayuca is considered the earliest capital city of the Chichimecs, nomadic tribes that migrated and settled in the Valley of Mexico, forming their own kingdoms.

By some historiographic traditions Tenayuca had been founded ca. 1224 by Xolotl, a semi-legendary ruler of a "Chichimec" tribe that had settled in the Valley of Mexico in the period some time after the 12th-century collapse of the former political hegemony in the Valley — the so-called Toltec
Toltec
The Toltec culture is an archaeological Mesoamerican culture that dominated a state centered in Tula, Hidalgo in the early post-classic period of Mesoamerican chronology...
empire, emanating from Tula
Tula, Hidalgo
Tula, formally, Tula de Allende, is a town and one of the 84 municipalities of Hidalgo, in central-eastern Mexico. The municipality covers an area of 305.8 km² , and as of 2005, the municipality had a total population of 93,296, with 28,432 in the town...
. Xolotl was succeeded by Nopaltzin who consolidated the Chichimec Kingdom . His son, Tlotzin, became lord of Tenayuca. When Nopaltzin died, his successor Quinatzin transferred the seat of Chichimec power to Texcoco, relegating Tenayuca to a site of secondary importance.

However archaeological remains recovered from Tenayuca indicate that the site had already been occupied in the Classic Period
Mesoamerican chronology
Mesoamerican chronology divides the history of pre-Columbian Mesoamerica into several periods: the Paleo-Indian , the Archaic , the Preclassic , the Classic , and the Postclassic...
, long before this foundational event described in several of the Mesoamerican historical documents. Its population increased in the early Postclassic and continued to increase after the fall of Tula, when Tenayuca became an important regional power.

In the late 13th century A.D., some time after the arrival of the Chichimecs at Tenayuca, Tochintecuhtli, the ruling lord of Tenayuca, allied himself with Huetzin, lord of the Acolhua
Acolhua
The Acolhua are a Mesoamerican people who arrived in the Valley of Mexico in or around the year 1200 CE. The Acolhua were a sister culture of the Aztecs as well as the Tepanec, Chalca, Xochimilca and others....
s of Coatlichán, and their alliance dominated the central Valley of Mexico, extending as far northeast as Tulancingo
Tulancingo
Tulancingo is the second-largest city in the Mexican state of Hidalgo. It is located in the southeastern part of the state and also forms one of the 84 municipalities of Hidalgo, as well as the Archdiocese of Tulancingo...
. By the mid 14th century the power of Tenayuca had already waned, it was conquered and replaced as a regional power by nearby Azcapotzalco
Azcapotzalco (altepetl)
Azcapotzalco was a pre-Columbian Nahua altepetl , capital of the Tepanec empire, in the Valley of Mexico, on the western shore of Lake Texcoco.The name Azcapotzalco means "at the anthill" in Nahuatl...
. Around 1434, Tenochtitlan conquered Tenayuca, bringing it into the Aztec Empire.

At some point the site was abandoned. It was rediscovered during excavations made by Mexican archaeologists in 1925.

Aztec temple architecture primarily developed at Tenayuca, which has the earliest example yet found of the typical Aztec double pyramid, which consists of joined pyramidal bases supporting two temples. After Tenayuca came under Aztec dominance, the Aztecs adopted this innovative style for the worship of their own deities.

The temple of Tenayuca is better preserved than the similar temple of Tlatelolco
Tlatelolco (archaeological site)
Tlatelolco is an archaeological excavation site in Mexico City, Mexico where remains of the pre-Columbian city-state of the same name have been found...
and its wall of serpents remains mostly intact on three sides of the base of the pyramid. 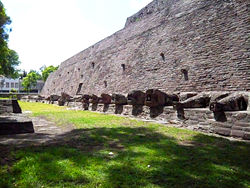 The site consists of a massive pyramidal platform with a double stairway rising on the western side to where the twin temples of Tlaloc
Tlaloc
Tlaloc was an important deity in Aztec religion, a god of rain, fertility, and water. He was a beneficent god who gave life and sustenance, but he was also feared for his ability to send hail, thunder and lightning, and for being the lord of the powerful element of water. In Aztec iconography he...
and Huitzilopochtli
Huitzilopochtli
In Aztec mythology, Huitzilopochtli, also spelled Uitzilopochtli , was a god of war, a sun god, and the patron of the city of Tenochtitlan. He was also the national god of the Mexicas of Tenochtitlan.- Genealogy :...
once stood. The temple of Tlaloc occupied the northern part of the pyramid while the Huitzilopochtli temple stood to the south. Some of the temple steps are carved with year-glyphs such as knives, circles and shields. To the south of the stairway at ground level is a projecting platform bearing sculptures of crossed bones and projecting skulls.

Like many Mesoamerica
Mesoamerica
Mesoamerica is a region and culture area in the Americas, extending approximately from central Mexico to Belize, Guatemala, El Salvador, Honduras, Nicaragua, and Costa Rica, within which a number of pre-Columbian societies flourished before the Spanish colonization of the Americas in the 15th and...
n temples, various phases of construction were built one on top of the other. In the case of Tenayuca, the size of the building increased through six phases of construction but the basic form remained unchanged. The original double pyramid was enlarged five times, the first time probably in 1299 and then successively at 52-year intervals. The last phase of construction probably dates to 1507 and measures 62 meters wide by 50 meters deep. Aztec influence is apparent from the third stage in 1351, the following stages were purely Aztec in style, as demonstrated by the sloping tiers of the pyramid rather than the vertical walls apparent in the earlier stages.

The pyramid base is surrounded by a coatepantli (Nahuatl for wall of serpents), a low platform supporting 138 stone sculptures of snakes. Their bodies were once covered with plaster and painted in a variety of colours, with their scales painted black. On the north and south sides of the pyramid, at ground level, are two sculptures of coiled serpents . The crests on their heads bear markings representing the stars and identify them as Xiuhcoatl (the fire serpent). All the serpent sculptures around the pyramid were associated with fire and sun worship.

There are several altars and shrines nearby that were also excavated, some of these also have serpent sculptures.

200 meters from the main pyramid of Tenayuca are the remains of what appear to have been an elite residential complex, with surviving plaster floors in some rooms. This area has been labelled Tenayuca II by archaeologists and appears to have gone through various phases of construction.

The pyramid of Tenayuca is in the care of the Instituto Nacional de Antropología e Historia (National Institute of Anthropology and History) and is open to the public.