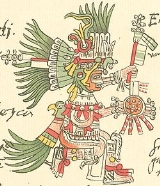 Overview
In Aztec mythology
Aztec mythology
The aztec civilization recognized a polytheistic mythology, which contained the many deities and supernatural creatures from their religious beliefs. "orlando"- History :...
, Huitzilopochtli, also spelled Uitzilopochtli ( "Hummingbird on the Left", or "Left-Handed Hummingbird", huitzilin being Nahuatl
Nahuatl
Nahuatl is thought to mean "a good, clear sound" This language name has several spellings, among them náhuatl , Naoatl, Nauatl, Nahuatl, Nawatl. In a back formation from the name of the language, the ethnic group of Nahuatl speakers are called Nahua...
for hummingbird
Hummingbird
Hummingbirds are birds that comprise the family Trochilidae. They are among the smallest of birds, most species measuring in the 7.5–13 cm range. Indeed, the smallest extant bird species is a hummingbird, the 5-cm Bee Hummingbird. They can hover in mid-air by rapidly flapping their wings...
), was a god of war, a sun god, and the patron of the city of Tenochtitlan. He was also the national god of the Mexica
Mexica
The Mexica were a pre-Columbian people of central Mexico.Mexica may also refer to:*Mexica , a board game designed by Wolfgang Kramer and Michael Kiesling*Mexica , a 2005 novel by Norman Spinrad...
s of Tenochtitlan.
Huitzilopochtli's mother was Coatlicue
Coatlicue
Coatlicue, also known as Teteoinan , "The Mother of Gods" , is the Aztec goddess who gave birth to the moon, stars, and Huitzilopochtli, the god of the sun and war...
, and his father was a ball of feathers (or, alternatively, Mixcoatl
Mixcoatl
Mixcoatl , or Camaxtli, was the god of the hunt and identified with the Milky Way, the stars, and the heavens in several Mesoamerican cultures. He was the patron deity of the Otomi, the Chichimecs, and several groups that claimed descent from the Chichimecs...
).