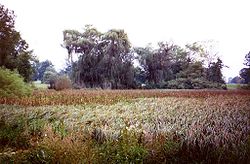 Temperate grassland
Grassland
Grasslands are areas where the vegetation is dominated by grasses and other herbaceous plants . However, sedge and rush families can also be found. Grasslands occur naturally on all continents except Antarctica...
s, savanna
Savanna
A savanna, or savannah, is a grassland ecosystem characterized by the trees being sufficiently small or widely spaced so that the canopy does not close. The open canopy allows sufficient light to reach the ground to support an unbroken herbaceous layer consisting primarily of C4 grasses.Some...
s, and shrubland
Shrubland
Shrubland, scrubland, scrub or brush is a plant community characterized by vegetation dominated by shrubs, often also including grasses, herbs, and geophytes. Shrubland may either occur naturally or be the result of human activity...
s is a terrestrial biome
Biome
Biomes are climatically and geographically defined as similar climatic conditions on the Earth, such as communities of plants, animals, and soil organisms, and are often referred to as ecosystems. Some parts of the earth have more or less the same kind of abiotic and biotic factors spread over a...
whose predominant vegetation
Vegetation
Vegetation is a general term for the plant life of a region; it refers to the ground cover provided by plants. It is a general term, without specific reference to particular taxa, life forms, structure, spatial extent, or any other specific botanical or geographic characteristics. It is broader...
consists of grass
Grass
Grasses, or more technically graminoids, are monocotyledonous, usually herbaceous plants with narrow leaves growing from the base. They include the "true grasses", of the Poaceae family, as well as the sedges and the rushes . The true grasses include cereals, bamboo and the grasses of lawns ...
es and/or shrub
Shrub
A shrub or bush is distinguished from a tree by its multiple stems and shorter height, usually under 5–6 m tall. A large number of plants may become either shrubs or trees, depending on the growing conditions they experience...
s. The climate
Climate
Climate encompasses the statistics of temperature, humidity, atmospheric pressure, wind, rainfall, atmospheric particle count and other meteorological elemental measurements in a given region over long periods...
is temperate
Temperate
In geography, temperate or tepid latitudes of the globe lie between the tropics and the polar circles. The changes in these regions between summer and winter are generally relatively moderate, rather than extreme hot or cold...
and semi-arid to semi-humid.


Steppe
Steppe
In physical geography, steppe is an ecoregion, in the montane grasslands and shrublands and temperate grasslands, savannas, and shrublands biomes, characterized by grassland plains without trees apart from those near rivers and lakes...
s/shortgrass prairie
Shortgrass prairie
The shortgrass prairie ecosystem of the North American Great Plains is a prairie that includes lands from the eastern foothills of the Rocky Mountains east to Nebraska and Saskatchewan, including rangelands in Alberta, Wyoming, Montana, North, South Dakota, and Kansas, and extending to the south...
s are short grasslands that occur in semi-arid climates. Tallgrass prairie
Tallgrass prairie
The tallgrass prairie is an ecosystem native to central North America, with fire as its primary periodic disturbance. In the past, tallgrass prairies covered a large portion of the American Midwest, just east of the Great Plains, and portions of the Canadian Prairies. They flourished in areas with...
s are tall grasslands in areas of higher rainfall. Heath
Heath (habitat)
A heath or heathland is a dwarf-shrub habitat found on mainly low quality acidic soils, characterised by open, low growing woody vegetation, often dominated by plants of the Ericaceae. There are some clear differences between heath and moorland...
s and pasture
Pasture
Pasture is land used for grazing. Pasture lands in the narrow sense are enclosed tracts of farmland, grazed by domesticated livestock, such as horses, cattle, sheep or swine. The vegetation of tended pasture, forage, consists mainly of grasses, with an interspersion of legumes and other forbs...
s are, respectively, low shrublands and grasslands where forest growth is hindered by human activity, not climate.

Tall grasslands, including the tallgrass prairie
Tallgrass prairie
The tallgrass prairie is an ecosystem native to central North America, with fire as its primary periodic disturbance. In the past, tallgrass prairies covered a large portion of the American Midwest, just east of the Great Plains, and portions of the Canadian Prairies. They flourished in areas with...
of North America
North America
North America is a continent wholly within the Northern Hemisphere and almost wholly within the Western Hemisphere. It is also considered a northern subcontinent of the Americas...
and the Humid Pampas of Argentina
Argentina
Argentina , officially the Argentine Republic , is the second largest country in South America by land area, after Brazil. It is constituted as a federation of 23 provinces and an autonomous city, Buenos Aires...
, have moderate rainfall and rich soils which make them ideally suited to extensive agriculture, and tall grassland ecoregions include some of the most productive grain-growing regions in the world.

Savannas are areas with both grass and trees, but the trees do not form a canopy
Canopy (forest)
In biology, the canopy is the aboveground portion of a plant community or crop, formed by plant crowns.For forests, canopy also refers to the upper layer or habitat zone, formed by mature tree crowns and including other biological organisms .Sometimes the term canopy is used to refer to the extent...
as they would in a forest
Forest
A forest, also referred to as a wood or the woods, is an area with a high density of trees. As with cities, depending where you are in the world, what is considered a forest may vary significantly in size and have various classification according to how and what of the forest is composed...
.