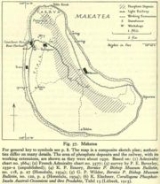 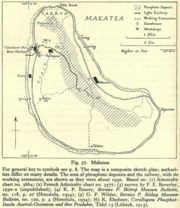 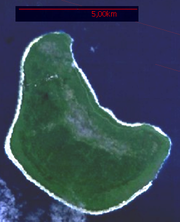 Mākatea is almost the only Paumotuan island with potable water
Drinking water
Drinking water or potable water is water pure enough to be consumed or used with low risk of immediate or long term harm. In most developed countries, the water supplied to households, commerce and industry is all of drinking water standard, even though only a very small proportion is actually...
. Its native name derived from the drinking water being brought out of its dark caves by the local people. "Mā," pure, clear; used here to mean water, "Atea," light of day and "K" for euphony. The other name of the Island was Mangaia-te-vai-tamāe, meaning "Mangaia of the purified (or clear) water."

This island was called "Aurora" by Dutch
Netherlands
The Netherlands is a constituent country of the Kingdom of the Netherlands, located mainly in North-West Europe and with several islands in the Caribbean. Mainland Netherlands borders the North Sea to the north and west, Belgium to the south, and Germany to the east, and shares maritime borders...
mariner Jakob Roggeveen
Jakob Roggeveen
Jacob Roggeveen was a Dutch explorer who was sent to find Terra Australis, but he instead came across Easter Island...
in 1722. Later, the Polynesians
Polynesians
The Polynesian peoples is a grouping of various ethnic groups that speak Polynesian languages, a branch of the Oceanic languages within the Austronesian languages, and inhabit Polynesia. They number approximately 1,500,000 people...
called it "Papa Tea" (which means "white rock").

Also, the island of Makatea was featured in the 1998 movie Six Days Seven Nights
Six Days Seven Nights
Six Days Seven Nights is a 1998 adventure film. The screenplay was written by Michael Browning. The movie, filmed on location in Kauai, is directed by Ivan Reitman. It stars Harrison Ford, Anne Heche, David Schwimmer, Jacqueline Obradors, and Temuera Morrison...
starring Harrison Ford
Harrison Ford
Harrison Ford is an American film actor and producer. He is famous for his performances as Han Solo in the original Star Wars trilogy and as the title character of the Indiana Jones film series. Ford is also known for his roles as Rick Deckard in Blade Runner, John Book in Witness and Jack Ryan in...
, Anne Heche
Anne Heche
Anne Celeste Heche is an American actress, director, and screenwriter. She started her career on the daytime soap opera Another World, for which she won a Daytime Emmy Award in 1991. Heche gradually landed supporting roles in feature films, and in 1997 appeared in I Know What You Did Last Summer,...
and David Schwimmer
David Schwimmer
David Lawrence Schwimmer is an American actor and director of television and film. He was born in New York City, and his family moved to Los Angeles when he was two. He began his acting career performing in school plays at Beverly Hills High School. In 1988, he graduated from Northwestern...
. To quote Quinn Harris (Harrison Ford): "It's an island, babe. If you didn't bring it here, you won't find it here."
Although the name Makatea was used in the film, the movie was not filmed in Makatea and nothing about the film depicted the rugged landscape and real dangers of the island.

Phosphate mining drew hundreds of people to Makatea in the years before the French Centre d'Experimentation du Pacifique (CEP) started nuclear experiments. For over two decades or even longer, Makatea was a very active little island because of the ships arriving to load phosphate and to bring supplies and food to the many workers and their families that lived there. After the end of the phosphate exploitation, Makatea was almost totally left on its own with only a few families left to guard the island. The mining produced hundreds if not thousands of hand dug holes across the upper plateau of Makatea. Each cylindric hole is about 8 ft. in diameter and 50 to 75 ft. in depth. An unsuspecting visitor could easily fall into a hole and die while walking in the thick undergrowth that hides these holes. The once active village where the miners lived had a school, bakery, first aid medical center and all the things needed to make life comfortable. All that remains today has been destroyed by time and nature. The school and other places have been leveled to the ground and grown over by vines and jungle.

Makatea Island forms a commune associée of Rangiroa
Rangiroa
Rangiroa or Te Kokōta , is the largest atoll in the Tuamotus, and one of the largest in the world . It is part of the Palliser group. The nearest atoll is Tikehau, located only 12 km to the West...
commune with 93 inhabitants (2002 census). The main village is called Moumu. The islanders live off agriculture
Agriculture
Agriculture is the cultivation of animals, plants, fungi and other life forms for food, fiber, and other products used to sustain life. Agriculture was the key implement in the rise of sedentary human civilization, whereby farming of domesticated species created food surpluses that nurtured the...
, culture of copra
Copra
Copra is the dried meat, or kernel, of the coconut. Coconut oil extracted from it has made copra an important agricultural commodity for many coconut-producing countries. It also yields coconut cake which is mainly used as feed for livestock.-Production:...
, some fishing
Fishing
Fishing is the activity of trying to catch wild fish. Fish are normally caught in the wild. Techniques for catching fish include hand gathering, spearing, netting, angling and trapping....
and the trade of coconut crab
Coconut crab
The coconut crab, Birgus latro, is a species of terrestrial hermit crab, also known as the robber crab or palm thief. It is the largest land-living arthropod in the world, and is probably at the upper size limit of terrestrial animals with exoskeletons in today's atmosphere at a weight of up to...
s.