Encyclopedia
A team comprises a group of people or animal
Animal
Animals are a major group of multicellular, eukaryotic organisms of the kingdom Animalia or Metazoa. Their body plan eventually becomes fixed as they develop, although some undergo a process of metamorphosis later on in their life. Most animals are motile, meaning they can move spontaneously and...
s linked in a common purpose. Teams are especially appropriate for conducting tasks that are high in complexity
Complexity
In general usage, complexity tends to be used to characterize something with many parts in intricate arrangement. The study of these complex linkages is the main goal of complex systems theory. In science there are at this time a number of approaches to characterizing complexity, many of which are...
and have many interdependent subtasks.

A group in itself does not necessarily constitute a team. Teams normally have members with complementary skills and generate synergy through a coordinated effort which allows each member to maximise his/her strengths and minimise his/her weaknesses. Team members need to learn how to help one another, help other team members realize their true potential, and create an environment that allows everyone to go beyond their limitations.

Thus teams of game
Game
A game is structured playing, usually undertaken for enjoyment and sometimes used as an educational tool. Games are distinct from work, which is usually carried out for remuneration, and from art, which is more often an expression of aesthetic or ideological elements...
players can form (and re-form) to practise their craft. Transport logistics executives can select teams of horse
Horse
The horse is one of two extant subspecies of Equus ferus, or the wild horse. It is a single-hooved mammal belonging to the taxonomic family Equidae. The horse has evolved over the past 45 to 55 million years from a small multi-toed creature into the large, single-toed animal of today...
s, dog
Dog
The domestic dog is a domesticated form of the gray wolf, a member of the Canidae family of the order Carnivora. The term is used for both feral and pet varieties. The dog may have been the first animal to be domesticated, and has been the most widely kept working, hunting, and companion animal in...
s or ox
Ox
An ox , also known as a bullock in Australia, New Zealand and India, is a bovine trained as a draft animal. Oxen are commonly castrated adult male cattle; castration makes the animals more tractable...
en for the purpose of conveying goods.

Compare the more structured/skilled concept of a crew
Crew
A crew is a body or a class of people who work at a common activity, generally in a structured or hierarchical organization. A location in which a crew works is called a crewyard or a workyard...
, and the advantages of formal and informal partnership
Partnership
A partnership is an arrangement where parties agree to cooperate to advance their mutual interests.Since humans are social beings, partnerships between individuals, businesses, interest-based organizations, schools, governments, and varied combinations thereof, have always been and remain commonplace...
s.

Team size and composition affect the team processes and outcomes. The optimal size (and composition) of teams is debated and will vary depending on the task at hand. At least one study of problem-solving in groups showed an optimal size of groups at four members. Other works estimate the optimal size between 5-12 members. Belbin
Meredith Belbin
Meredith Belbin is a British researcher and management theorist, best known for his work on management teams. He is a visiting professor and Honorary Fellow of Henley Management College in Oxfordshire, England.-Early Life and Work:...
did extensive research on teams prior to 1990 in the UK that clearly demonstrated that the optimum team size is 8 roles plus a specialist as needed. Fewer than 5 members results in decreased perspectives and diminished creativity. Membership in excess of 12 results in increased conflict and greater potential of sub-groups forming.

David Cooperrider
David Cooperrider
David Cooperrider is the Fairmount Minerals Professor of Organizational Behavior at the Weatherhead School of Management at Case Western Reserve University, and Faculty Director at the Center for Business as an Agent of World Benefit at Case....
suggests that the larger the group, the better. This is because a larger group is able to address concerns of the whole system
System
System is a set of interacting or interdependent components forming an integrated whole....
. So while a large team may be ineffective at performing a given task, Cooperider says that the relevance of that task should be considered, because determining whether the team is effective first requires identifying what needs to be accomplished.

Team members normally have different roles, like team leader and agents. Large teams can divide into sub-teams according to need.

Many teams go through a life-cycle of stages, identified by Bruce Tuckman
Bruce Tuckman
Bruce Wayne Tuckman is an American Psychologist, who has carried out research into the theory of group dynamics. In 1965, he published one of his theories called "Tuckman's Stages". In 1977, he added a fifth stage named Adjourning....
as: forming, storming, norming, performing and adjourning
Forming-storming-norming-performing
The Forming – Storming – Norming – Performing model of group development was first proposed by Bruce Tuckman in 1965, who maintained that these phases are all necessary and inevitable in order for the team to grow, to face up to challenges, to tackle problems, to find solutions, to plan work, and...
. 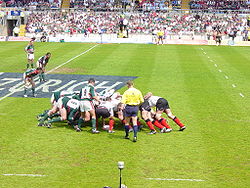 Of particular importance is the concept
Concept
The word concept is used in ordinary language as well as in almost all academic disciplines. Particularly in philosophy, psychology and cognitive sciences the term is much used and much discussed. WordNet defines concept: "conception, construct ". However, the meaning of the term concept is much...
of different types of teams. A distinction is usually drawn between "independent" and "interdependent" teams.
To continue the sports team example, a rugby
Rugby football
Rugby football is a style of football named after Rugby School in the United Kingdom. It is seen most prominently in two current sports, rugby league and rugby union.-History:...
team is clearly an interdependent team:

Coaching an "interdependent" team like a football
Football
Football may refer to one of a number of team sports which all involve, to varying degrees, kicking a ball with the foot to score a goal. The most popular of these sports worldwide is association football, more commonly known as just "football" or "soccer"...
team necessarily requires a different approach from coaching an "independent" team because the costs and benefits to individual team members — and therefore the intrinsic incentives for positive team behaviors — are very different. An interdependent team benefits from getting to know the other team members socially, from developing trust in each other, and from conquering artificial challenges (such as offered in outdoors ropes courses).

Normally, a manager acts as the team leader and is responsible for defining the goals, methods, and functioning of the team. However, inter-dependencies and conflicts between different parts of an organisation may not be best addressed by hierarchical models of control. Self-managed teams use clear boundaries to create the freedom and responsibility to accomplish tasks in an efficient manner.

The main idea of the self-managed team is that the leader does not operate with positional authority. In a traditional management role, the manager is responsible for providing instruction, conducting communication, developing plans, giving orders, and disciplining and rewarding employees, and making decisions by virtue of his or her position. In this organisational model, the manager delegates specific responsibility and decision-making authority to the team itself, in the hope that the group will make better decisions than any individual. Neither a manager nor the team leader make independent decisions in the delegated responsibility area. Decisions are typically made by consensus in successful self-managed teams, by voting
Voting
Voting is a method for a group such as a meeting or an electorate to make a decision or express an opinion—often following discussions, debates, or election campaigns. It is often found in democracies and republics.- Reasons for voting :...
in very large or formal teams, and by hectoring and bullying in unsuccessful teams. The team as a whole is accountable for the outcome of its decisions and actions.

As a self-managed team develops successfully, more and more areas of responsibility can be delegated, and the team members can come to rely on each other in a meaningful way.

In self-managed teams it is vital that the manager sets expectations for his/her employees. Expectations allow individuals to understand the manager’s evaluation process in addition to holding employees accountable to certain tasks. If it becomes routine that an employee’s tasks are unfulfilled, the manager should replace that individual immediately.

A team used only for a defined period of time and for a separate, concretely definable purpose, often becomes known as a project team
Project team
A project team is a team whose members usually belong to different groups, functions and are assigned to activities for the same project. A team can be divided into sub-teams according to need. Usually project teams are only used for a defined period of time. They are disbanded after the project is...
. Managers commonly label groups of people as a "team" based on having a common function. Members of these teams might belong to different groups, but receive assignment to activities for the same project
Project
A project in business and science is typically defined as a collaborative enterprise, frequently involving research or design, that is carefully planned to achieve a particular aim. Projects can be further defined as temporary rather than permanent social systems that are constituted by teams...
, thereby allowing outsiders to view them as a single unit. In this way, setting up a team allegedly facilitates the creation, tracking and assignment of a group of people based on the project in hand. The use of the "team" label in this instance often has no relationship to whether the employees are working as a team.

A sport
Sport
A Sport is all forms of physical activity which, through casual or organised participation, aim to use, maintain or improve physical fitness and provide entertainment to participants. Sport may be competitive, where a winner or winners can be identified by objective means, and may require a degree...
s team is a group of people which play a sport together. Members include all players (even those who are waiting their turn to play) as well as support members such as a team manager or coach
Coach (sport)
In sports, a coach is an individual involved in the direction, instruction and training of the operations of a sports team or of individual sportspeople.-Staff:...
.


Not all groups are teams

Some people also use the word "team" when they mean "employees." A "sales
Sales
A sale is the act of selling a product or service in return for money or other compensation. It is an act of completion of a commercial activity....
team" is a common example of this loose or perhaps euphemistic usage, though inter dependencies exist in organisations, and a sales team can be let down by poor performance on other parts of the organisation upon which sales depend, like delivery, after-sales service, etc.. However "sales staff" is a more precise description of the typical arrangement.


From groups to teams

Groups develop into teams in four stages. The four stages are: dependency and inclusion, counter dependency and fighting, trust and structure, and work. In the first stage, group development is characterized by members' dependency on the designated leader. In the second stage, the group seeks to free itself from its dependence on the leader and groups have conflicts about goals and procedures. In the third stage, the group manages to work through the conflicts. And in the last stage, groups focus on team productivity.