Encyclopedia
Taumata­whakatangihanga­koauau­o­tamatea­turi­pukakapiki­maunga­horo­nuku­pokai­whenua­kitanatahu is the Māori
Maori language
Māori or te reo Māori , commonly te reo , is the language of the indigenous population of New Zealand, the Māori. It has the status of an official language in New Zealand...
name for a hill, 305 metres (1,000.7 ft) high, close to Porangahau
Porangahau
Porangahau is a small township close to the Pacific Ocean coast of the southeastern North Island of New Zealand. It has a very small population. It is in the southernmost part of Hawke's Bay, 45 kilometres south of Waipukurau, and close to the mouth of the Porangahau River...
, south of Waipukurau
Waipukurau
Waipukurau , also known as Ypuk, is the largest town in the Central Hawke's Bay District on the east coast of the North Island of New Zealand. It is located 50 kilometres southwest of Hastings on the banks of the Tukituki River....
in southern Hawke's Bay, New Zealand
New Zealand
New Zealand is an island country in the south-western Pacific Ocean comprising two main landmasses and numerous smaller islands. The country is situated some east of Australia across the Tasman Sea, and roughly south of the Pacific island nations of New Caledonia, Fiji, and Tonga...
.

The name on the sign that marks the hill is "Taumata­whakatangihanga­koauau­o­tamatea­turi­pukakapiki­maunga­horo­nuku­pokai­whenua­kitanatahu", which translates roughly as "The summit where Tamatea, the man with the big knees, the climber of mountains, the land-swallower who travelled about, played his nose flute
Nose flute
The nose flute is a popular musical instrument played in Polynesia and the Pacific Rim countries. Other versions are found in Africa, China, and India.- Hawaii :In the North Pacific, in the Hawaiian islands the nose flute was a common courting instrument...
to his loved one". At 85 letters, it has been listed in the Guinness World Records
Guinness World Records
Guinness World Records, known until 2000 as The Guinness Book of Records , is a reference book published annually, containing a collection of world records, both human achievements and the extremes of the natural world...
as one of the longest place names in the world.

Other forms of the name are longer still: "Taumata­whakatangihanga­koauau­o­tamatea­ure­haea­turi­pukaka­piki­maunga­horo­nuku­pokai­whenua­ki­tana­tahu" has 92 letters. An even longer version, Taumata-whakatangihanga-koauau-o-Tamatea-haumai-tawhiti-ure-haea-turi-pukaka-piki-maunga-horo-nuku-pokai-whenua-ki-tana-tahu, has 105 letters and means The hill of the flute playing by Tamatea — who was blown hither from afar, had a slit penis, grazed his knees climbing mountains, fell on the earth, and encircled the land — to his beloved.


Tamatea, explorer of the land 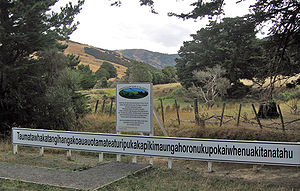 Tamatea-pōkai-whenua (Tamatea the explorer of the land) was the father of Kahungunu, ancestor of the Ngāti Kahungunu
Ngati Kahungunu
Ngāti Kahungunu is a Māori iwi located along the eastern coast of the North Island of New Zealand. The iwi is traditionally centred in the Hawke’s Bay and Tararua and Wairārapa regions....
iwi. Mention of Tamatea's explorations of the land occur not only in Ngāti Kahungunu legends, but also in the traditions of iwi from Northland, where he is said to have explored the Hokianga
Hokianga
Hokianga is an area surrounding the Hokianga Harbour, also known as The Hokianga River, a long estuarine drowned valley on the west coast in the north of the North Island of New Zealand....
and Kaipara
Kaipara Harbour
Kaipara Harbour is a large enclosed harbour estuary complex on the north western side of the North Island of New Zealand. The northern part of the harbour is administered by the Kaipara District and the southern part is administered by the Rodney District...
harbours. In traditions from the Bay of Plenty
Bay of Plenty
The Bay of Plenty , often abbreviated to BOP, is a region in the North Island of New Zealand situated around the body of water of the same name...
region, he left a son, Ranginui, who is the ancestor of Ngāti Ranginui
Ngati Ranginui
Ngāti Ranginui is a Māori iwi centred in Tauranga in the Bay of Plenty region of New Zealand. Ngāti Ranginui is one of the three Tauranga Moana tribes, maintaining close ties with Ngāi Te Rangi and Ngāti Pūkenga. In the 2001 census, 6,120 people claimed affiliation to the iwi, representing 9 hapu...
of Tauranga
Tauranga
Tauranga is the most populous city in the Bay of Plenty region, in the North Island of New Zealand.It was settled by Europeans in the early 19th century and was constituted as a city in 1963...
. Legends from the East Coast of the North Island tell of his explorations in Tūranga-nui (Gisborne
Gisborne, New Zealand
-Economy:The harbour was host to many ships in the past and had developed as a river port to provide a more secure location for shipping compared with the open roadstead of Poverty Bay which can be exposed to southerly swells. A meat works was sited beside the harbour and meat and wool was shipped...
), Māhia, Wairoa, Ahuriri (Napier
Napier, New Zealand
Napier is a New Zealand city with a seaport, located in Hawke's Bay on the eastern coast of the North Island. The population of Napier is about About 18 kilometres south of Napier is the inland city of Hastings. These two neighboring cities are often called "The Twin Cities" or "The Bay Cities"...
), Heretaunga (near Hastings
Hastings, New Zealand
The city of Hastings is a major urban settlement in the Hawke's Bay region of the North Island of New Zealand, and it is the largest settlement by population in Hawke's Bay. Hastings city is the administrative centre of the Hastings District...
) and Pōrangahau. He travelled via the Mangakopikopiko River, over the Tītī-o-kura saddle via Pohokura to Lake Taupo
Lake Taupo
Lake Taupo is a lake situated in the North Island of New Zealand. With a surface area of , it is the largest lake by surface area in New Zealand, and the second largest freshwater lake by surface area in geopolitical Oceania after Lake Murray ....
. The Ōtamatea River and swamp is named after him. Tamatea is also the name of a place in Napier. Early South Island
South Island
The South Island is the larger of the two major islands of New Zealand, the other being the more populous North Island. It is bordered to the north by Cook Strait, to the west by the Tasman Sea, to the south and east by the Pacific Ocean...
legends say that Tamatea sailed down the east coast. His canoe was wrecked in the far south, and transformed into Tākitimu mountain range. Tamatea then returned to the North Island, and travelled via the Whanganui River
Whanganui River
The Whanganui River is a major river in the North Island of New Zealand.Known for many years as the Wanganui River, the river's name reverted to Whanganui in 1991, according with the wishes of local iwi. Part of the reason was also to avoid confusion with the Wanganui River in the South Island...
.

The name is featured in a Mountain Dew
Mountain Dew
Mountain Dew is a citrus-flavored carbonated soft drink brand produced and owned by PepsiCo. The original formula was invented in the 1940s by Tennessee beverage bottlers Barney and Ally Hartman and was first marketed in Marion, VA, Knoxville and Johnson City, Tennessee. A revised formula was...
jingle, and it also appears in the 1976 (re-released in 1979) single "Lone Ranger" by British band Quantum Jump
Quantum Jump
Quantum Jump was a 1970s British band, consisting of keyboard player and singer Rupert Hine, guitarist Mark Warner, bass player John G. Perry and drummer Trevor Morais .-Career:...
. Kenny Everett used a padded out version of the name as the introduction to the weekly aired "Kenny Everett Video Show" featuring an animated cartoon native speaking the words.
It is the subject of a 1960 song by the New Zealand balladeer Peter Cape
Peter Cape
Peter Cape was a singer and song writer born in Helensville, New Zealand.He is best remember for his songs "Taumarunui On The Main Trunk Line" and "She'll Be Right Mate"....
.

Czech group Mako!Mako playing Run'n'Be style composed a song Taumata where the full name is the only word used in lyrics. Tennis star Martina Navratilova learned to say the word when she was ten years old.