The harbour was host to many ships in the past and had developed as a river port to provide a more secure location for shipping compared with the open roadstead of Poverty Bay which can be exposed to southerly swells. A meat works was sited beside the harbour and meat and wool was shipped from here. Now the harbour is the home of many smaller fishing boats as well as ships loading logs for export.

The city maintains a rural charm and is a popular holiday spot. Local industries include agriculture
Agriculture
Agriculture is the cultivation of animals, plants, fungi and other life forms for food, fiber, and other products used to sustain life. Agriculture was the key implement in the rise of sedentary human civilization, whereby farming of domesticated species created food surpluses that nurtured the...
, horticulture
Horticulture
Horticulture is the industry and science of plant cultivation including the process of preparing soil for the planting of seeds, tubers, or cuttings. Horticulturists work and conduct research in the disciplines of plant propagation and cultivation, crop production, plant breeding and genetic...
, farming and forestry
Forestry
Forestry is the interdisciplinary profession embracing the science, art, and craft of creating, managing, using, and conserving forests and associated resources in a sustainable manner to meet desired goals, needs, and values for human benefit. Forestry is practiced in plantations and natural stands...
. Wine
Wine
Wine is an alcoholic beverage, made of fermented fruit juice, usually from grapes. The natural chemical balance of grapes lets them ferment without the addition of sugars, acids, enzymes, or other nutrients. Grape wine is produced by fermenting crushed grapes using various types of yeast. Yeast...
production is also valuable to the local economy.

Two major annual events are the Dawn Raid
Dawn Raid Entertainment
Dawn Raid Entertainment is a record label based in Papatoetoe, South Auckland, in New Zealand. It has signed many New Zealand Hip-hop and R&B artists such as Savage, Adeaze, Aaradhna, The Deceptikonz, Devolo and Ill Semantics....
Beach Day Out, which is an outdoor concert featuring many of the Dawn Raid hip-hop stars held in January, and Rhythm & Vines
Rhythm & Vines
Rhythm and Vines is an annual music festival held at Waiohika Estate vineyard, several kilometres from the city of Gisborne, New Zealand...
, a 3-day New Year's music festival, featuring well-known New Zealand and international bands performing in the vineyard
Vineyard
A vineyard is a plantation of grape-bearing vines, grown mainly for winemaking, but also raisins, table grapes and non-alcoholic grape juice...
setting of Waiohika Estate.

In the surroundings are two arboreta
Arboretum
An arboretum in a narrow sense is a collection of trees only. Related collections include a fruticetum , and a viticetum, a collection of vines. More commonly, today, an arboretum is a botanical garden containing living collections of woody plants intended at least partly for scientific study...
:

Gisborne is the northern terminus of the Palmerston North - Gisborne Line
Palmerston North - Gisborne Line
The Palmerston North – Gisborne Line is a secondary main line railway in the North Island of New Zealand. It branches from the North Island Main Trunk Railway in Palmerston North and runs east through the Manawatu Gorge to Woodville, where it meets the Wairarapa Line, and then proceeds to...
railway, which opened in 1942. Passenger services were provided until 1988, when the Endeavour
Endeavour (train)
The Endeavour was a long-distance passenger train service between Wellington and Napier in the North Island of New Zealand...
express was cancelled north of Napier
Napier, New Zealand
Napier is a New Zealand city with a seaport, located in Hawke's Bay on the eastern coast of the North Island. The population of Napier is about About 18 kilometres south of Napier is the inland city of Hastings. These two neighboring cities are often called "The Twin Cities" or "The Bay Cities"...
. Today, the railway carries solely freight. There is currently ongoing debate as to whether the line should be retained. 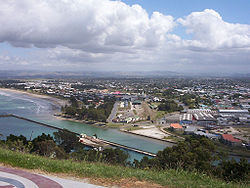