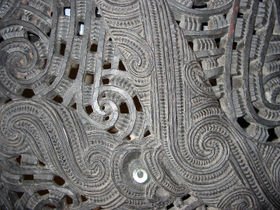 In Māori mythology
Maori mythology
Māori mythology and Māori traditions are the two major categories into which the legends of the Māori of New Zealand may usefully be divided...
, Tangaroa (also Takaroa) is one of the great god
God
God is the English name given to a singular being in theistic and deistic religions who is either the sole deity in monotheism, or a single deity in polytheism....
s, the god of the sea
Sea
A sea generally refers to a large body of salt water, but the term is used in other contexts as well. Most commonly, it means a large expanse of saline water connected with an ocean, and is commonly used as a synonym for ocean...
. He is a son of Ranginui and Papatuanuku, Sky
Sky
The sky is the part of the atmosphere or outer space visible from the surface of any astronomical object. It is difficult to define precisely for several reasons. During daylight, the sky of Earth has the appearance of a pale blue surface because the air scatters the sunlight. The sky is sometimes...
and Earth
Earth
Earth is the third planet from the Sun, and the densest and fifth-largest of the eight planets in the Solar System. It is also the largest of the Solar System's four terrestrial planets...
. After he joins his brothers Rongo
Rongo
In Māori mythology, Rongo is a major god, the god of cultivated food, especially the kūmara, a vital food crop. Other food crops cultivated by Māori in traditional times include taro, yams , cordyline , and gourds . Because of their tropical origin, most of these crops were difficult to grow except...
, Tūmatauenga
Tumatauenga
In Māori mythology, Tū or Tūmatauenga is one of the great gods, and the origin of war. All war-parties were dedicated to him, and he was treated with the greatest respect and awe. He is usually a son of the primordial parent, sky and earth...
, Haumia, and Tane
Tane
In Māori mythology, Tāne is the god of forests and of birds, and the son of Ranginui and Papatuanuku, the sky father and the earth mother, who lie in a tight embrace...
in the forcible separation of their parents, he is attacked by his brother Tawhirimatea
Tawhirimatea
In Māori mythology, Tāwhirimātea is the god of weather, including thunder and lightning, wind, clouds and storms. He is a son of Papatūānuku and Ranginui...
, the god of storms, and forced to hide in the sea. Tangaroa is the father of many sea creatures. Tangaroa's son, Punga
Punga (mythology)
In Māori mythology, Punga is a supernatural being, the ancestor of sharks, lizards, rays, and all deformed, ugly things. All ugly and strange animals are Punga's children. Hence the saying Te aitanga a Punga used to describe an ugly person...
, has two children, Ikatere
Ikatere
In Māori & Polynesian mythology, Ika-tere or Ikatere is a fish god, the father of all the sea creatures including mermaids. He is a son of Punga and his brother is Tū-te-wehiwehi....
, the ancestor of fish
Fish
Fish are a paraphyletic group of organisms that consist of all gill-bearing aquatic vertebrate animals that lack limbs with digits. Included in this definition are the living hagfish, lampreys, and cartilaginous and bony fish, as well as various extinct related groups...
, and Tu-te-wehiwehi
Tu-te-wehiwehi
In Māori mythology, Tū-te-wehiwehi is the father of all reptiles. He is a son of Punga and brother of Ikatere....
(or Tu-te-wanawana), the ancestor of reptiles. Terrified by Tawhirimatea’s onslaught, the fish seek shelter in the sea, and the reptiles in the forests. Ever since, Tangaroa has held a grudge with Tāne, the god of forests, because he offers refuge to his runaway children (Grey 1971:1–5).

The contention between Tangaroa and Tāne, the father of birds, tree
Tree
A tree is a perennial woody plant. It is most often defined as a woody plant that has many secondary branches supported clear of the ground on a single main stem or trunk with clear apical dominance. A minimum height specification at maturity is cited by some authors, varying from 3 m to...
s, and humans, is an indication that the Māori thought of the ocean and the land as opposed realms. When people go out to sea to fish or to travel, they are in effect representatives of Tāne entering the realm of Tāne's enemy. For this reason, it was important that offerings were made to Tangaroa before any such expedition (Orbell 1998:146-147).

Another version of the origin of Tangaroa maintains that he is the son of Temoretu, and that Papa is his wife. Papa commits adultery with Rangi while Tangaroa is away, and in the resulting battle Tangaroa’s spear pierces Rangi through both his thighs. Papa then marries Rangi (White 1887–1891, I:22-23).

In another legend, Tangaroa marries Te Anu-matao (chilling cold). They are the parents of the gods ‘of the fish class’, including Te Whata-uira-a-Tangawa, Te Whatukura, Poutini, and Te Pounamu (Shortland 1882:17). In some versions, Tangaroa has a son, Tinirau
Tinirau
In Polynesian mythology, stories about Tinirau are found throughout the islands of Polynesia. He is a guardian of fish. Many themes recur in the various versions...
, and nine daughters (1891:463). As Tangaroa-whakamau-tai he exercises control over the tide
Tide
Tides are the rise and fall of sea levels caused by the combined effects of the gravitational forces exerted by the moon and the sun and the rotation of the Earth....
s.

In the South Island
South Island
The South Island is the larger of the two major islands of New Zealand, the other being the more populous North Island. It is bordered to the north by Cook Strait, to the west by the Tasman Sea, to the south and east by the Pacific Ocean...
, his name can take the form Takaroa.


Elsewhere in the Pacific 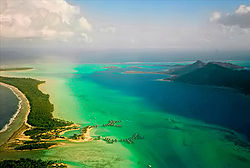 Tagaloa is one of the oldest Polynesian deities and in western Polynesia
Polynesia
Polynesia is a subregion of Oceania, made up of over 1,000 islands scattered over the central and southern Pacific Ocean. The indigenous people who inhabit the islands of Polynesia are termed Polynesians and they share many similar traits including language, culture and beliefs...
(for example, Samoa and Tonga) traditions has the status of supreme creator god. In eastern Polynesian cultures Tangaroa is usually considered of equal status to Tāne and thus not supreme.