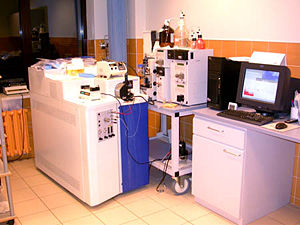 By doing tandem mass spectrometry in time, the separation is accomplished with ions trapped in the same place, with multiple separation steps taking place over time. A quadrupole ion trap
Quadrupole ion trap
A quadrupole ion trap exists in both linear and 3D varieties and refers to an ion trap that uses constant DC and radio frequency oscillating AC electric fields to trap ions. It is commonly used as a component of a mass spectrometer...
or FTMS
Fourier transform ion cyclotron resonance
Fourier transform ion cyclotron resonance mass spectrometry, also known as Fourier transform mass spectrometry, is a type of mass analyzer for determining the mass-to-charge ratio of ions based on the cyclotron frequency of the ions in a fixed magnetic field...
instrument can be used for such an analysis. Trapping instruments can perform multiple steps of analysis, which is sometimes referred to as MSn (MS to the n). Often the number of steps, n, is not indicated, but occasionally the value is specified; for example MS3 indicates three stages of separation. 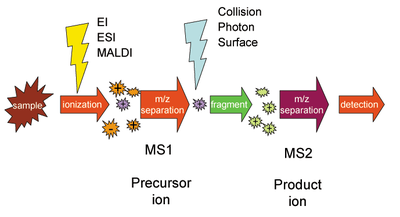 For tandem mass spectrometry in space, the different elements are often noted in shorthand.

The notation can be combined to indicate various hybrid instrument, for example

There are a number of different tandem MS experiments and all have their own applications and offer their own information. An instrument equipped for tandem MS can still be used to run MS experiments. Tandem MS can be done in either time or space. Tandem MS in space involves the physical separation of the instrument components (QqQ or QTOF), tandem MS in time involves the use of an ion trap
Ion trap
An ion trap is a combination of electric or magnetic fields that captures ions in a region of a vacuum system or tube. Ion traps have a number of scientific uses such as mass spectrometery and trapping ions while the ion's quantum state is manipulated...
.

Fragmentation of gas-phase ions is essential to tandem mass spectrometry and occurs between different stages of mass analysis. There are many methods used to fragment the ions and these can result in different types of fragmentation and thus different information about the structure and composition of the molecule.

Often, the ionization
Ionization
Ionization is the process of converting an atom or molecule into an ion by adding or removing charged particles such as electrons or other ions. This is often confused with dissociation. A substance may dissociate without necessarily producing ions. As an example, the molecules of table sugar...
process is sufficiently violent to leave the resulting ions with sufficient internal energy
Internal energy
In thermodynamics, the internal energy is the total energy contained by a thermodynamic system. It is the energy needed to create the system, but excludes the energy to displace the system's surroundings, any energy associated with a move as a whole, or due to external force fields. Internal...
to fragment within the mass spectrometer. If the product ions persist in their non-equilibrium state for a moderate amount of time before auto-dissociation this process is called metastable fragmentation. Nozzle-skimmer fragmentation refers to the purposeful induction of in-source fragmentation by increasing the nozzle-skimmer potential on usually electrospray
Electrospray ionization
Electrospray ionization is a technique used in mass spectrometry to produce ions. It is especially useful in producing ions from macromolecules because it overcomes the propensity of these molecules to fragment when ionized...
based instruments. Although in-source fragmentation allows for fragmentation analysis, it is not technically tandem mass spectrometry unless metastable ions are mass analyzed or selected before auto-dissociation and a second stage of analysis is performed on the resulting fragments. In-source fragmentation is often used in addition to tandem mass spectrometry (with post-source fragmentation) to allow for two steps of fragmentation in a pseudo MS3-type of experiment.

If an electron
Electron
The electron is a subatomic particle with a negative elementary electric charge. It has no known components or substructure; in other words, it is generally thought to be an elementary particle. An electron has a mass that is approximately 1/1836 that of the proton...
is added to a multiply charged positive ion, the Coulomb energy
Coulomb's law
Coulomb's law or Coulomb's inverse-square law, is a law of physics describing the electrostatic interaction between electrically charged particles. It was first published in 1785 by French physicist Charles Augustin de Coulomb and was essential to the development of the theory of electromagnetism...
is liberated. Adding a free electron is called electron capture dissociation
Electron capture dissociation
Electron-capture dissociation is a method of fragmenting gas phase ions for tandem mass spectrometric analysis . ECD involves the direct introduction of low energy electrons to trapped gas phase ions...
(ECD), and is represented by

Such fragmentation can also occur with a deprotonated species, in which an electron is transferred from the specie to an cationic reagent in a negative electron transfer dissociation (NETD) event:

represents the photon absorbed by the ion. Ultraviolet lasers can be used, but can lead to excessive fragmentation of biomolecules. Infrared
Infrared
Infrared light is electromagnetic radiation with a wavelength longer than that of visible light, measured from the nominal edge of visible red light at 0.74 micrometres , and extending conventionally to 300 µm...
photons will heat the ions and cause dissociation if enough of them are absorbed. This process is called infrared multiphoton dissociation
Infrared multiphoton dissociation
Infrared multiphoton dissociation is a technique used in mass spectrometry to fragment molecules in the gas phase usually for structural analysis of the original molecule. -How it works:...
(IRMPD) and is often accomplished with a carbon dioxide laser
Carbon dioxide laser
The carbon dioxide laser was one of the earliest gas lasers to be developed , and is still one of the most useful. Carbon dioxide lasers are the highest-power continuous wave lasers that are currently available...
and an ion trapping mass spectrometer such as a FTMS
Fourier transform ion cyclotron resonance
Fourier transform ion cyclotron resonance mass spectrometry, also known as Fourier transform mass spectrometry, is a type of mass analyzer for determining the mass-to-charge ratio of ions based on the cyclotron frequency of the ions in a fixed magnetic field...
. Blackbody radiation can also be used in a technique known as blackbody infrared radiative dissociation
Blackbody infrared radiative dissociation
In mass spectrometry blackbody infrared radiative dissociation is a method for fragmenting gas phase ions for tandem mass spectrometric analysis . BIRD uses the light from black body radiation to thermally excite the ions until a bond breaks...
(BIRD). In the BIRD method, the entire mass spectrometer vacuum chamber is heated to create infrared radiation.

With surface-induced dissociation (SID), the fragmentation is a result of the collision of an ion with a surface under high vacuum.

A peptide sequence tag
Peptide sequence tag
A peptide sequence tag is a piece of information about a peptide obtained by tandem mass spectrometry that can be used to identify this peptide in a protein database.-Mass spectrometry:...
obtained by tandem mass spectrometry can be used to identify a peptide in a protein database. A notation has been developed for indicating peptide fragments that arise from a tandem mass spectrum. Peptide fragment ions are indicated by a, b, or c if the charge is retained on the N-terminus and by x, y or z if the charge is maintained on the C-terminus. The subscript indicates the number of amino acid residues in the fragment. Superscripts are sometimes used to indicate neutral losses in addition to the backbone fragmentation, * for loss of ammonia and ° for loss of water. Although peptide backbone cleavage is the most useful for sequencing and peptide identification other fragment ions may be observed under certain conditions. These include the side chain loss ions d, v, w and immonium ions.

Oligosaccharide
Oligosaccharide
An oligosaccharide is a saccharide polymer containing a small number of component sugars, also known as simple sugars...
s may be sequenced using tandem mass spectrometry in a similar manner to peptide sequencing. Fragmentation generally occurs on either side of the glycosidic bond
Glycosidic bond
In chemistry, a glycosidic bond is a type of covalent bond that joins a carbohydrate molecule to another group, which may or may not be another carbohydrate....
(b, c, y and z ions) but also under more energetic conditions through the sugar ring structure in a cross-ring cleavage (x ions). Again trailing subscripts are used to indicate position of the cleavage along the chain. For cross ring cleavage ions the nature of the cross ring cleavage is indicated by preceding superscripts.

A notation for gas-phase fragmentation of oligonucleotide
Oligonucleotide
An oligonucleotide is a short nucleic acid polymer, typically with fifty or fewer bases. Although they can be formed by bond cleavage of longer segments, they are now more commonly synthesized, in a sequence-specific manner, from individual nucleoside phosphoramidites...
ions has been proposed.

Newborn screening is the process of testing newborn babies for treatable genetic
Genetic disorder
A genetic disorder is an illness caused by abnormalities in genes or chromosomes, especially a condition that is present from before birth. Most genetic disorders are quite rare and affect one person in every several thousands or millions....
, endocrinologic
Endocrinology
Endocrinology is a branch of biology and medicine dealing with the endocrine system, its diseases, and its specific secretions called hormones, the integration of developmental events such as proliferation, growth, and differentiation and the coordination of...
, metabolic
Inborn error of metabolism
Inborn errors of metabolism comprise a large class of genetic diseases involving disorders of metabolism. The majority are due to defects of single genes that code for enzymes that facilitate conversion of various substances into others...
and hematologic
Hematology
Hematology, also spelled haematology , is the branch of biology physiology, internal medicine, pathology, clinical laboratory work, and pediatrics that is concerned with the study of blood, the blood-forming organs, and blood diseases...
diseases. The development of tandem mass spectrometry screening in the early 1990s led to a large expansion of potentially detectable congenital metabolic diseases that affect blood levels of organic acids.