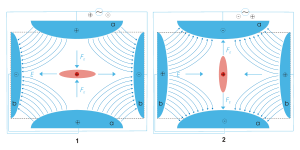 A quadrupole ion trap exists in both linear and 3D (Paul Trap, QIT) varieties and refers to an ion trap
Ion trap
An ion trap is a combination of electric or magnetic fields that captures ions in a region of a vacuum system or tube. Ion traps have a number of scientific uses such as mass spectrometery and trapping ions while the ion's quantum state is manipulated...
that uses constant DC
Direct current
Direct current is the unidirectional flow of electric charge. Direct current is produced by such sources as batteries, thermocouples, solar cells, and commutator-type electric machines of the dynamo type. Direct current may flow in a conductor such as a wire, but can also flow through...
and radio frequency
Radio frequency
Radio frequency is a rate of oscillation in the range of about 3 kHz to 300 GHz, which corresponds to the frequency of radio waves, and the alternating currents which carry radio signals...
(RF) oscillating AC
Alternating current
In alternating current the movement of electric charge periodically reverses direction. In direct current , the flow of electric charge is only in one direction....
electric field
Electric field
In physics, an electric field surrounds electrically charged particles and time-varying magnetic fields. The electric field depicts the force exerted on other electrically charged objects by the electrically charged particle the field is surrounding...
s to trap ions. It is commonly used as a component of a mass spectrometer. The invention of the 3D quadrupole ion trap itself is attributed to Wolfgang Paul
Wolfgang Paul
Wolfgang Paul was a German physicist, who co-developed the non-magnetic quadrupole mass filter which laid the foundation for what we now call an ion trap...
who shared the Nobel Prize in Physics
Nobel Prize in Physics
The Nobel Prize in Physics is awarded once a year by the Royal Swedish Academy of Sciences. It is one of the five Nobel Prizes established by the will of Alfred Nobel in 1895 and awarded since 1901; the others are the Nobel Prize in Chemistry, Nobel Prize in Literature, Nobel Peace Prize, and...
in 1989 for this work. 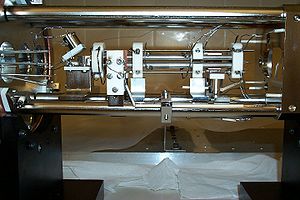 The quadrupole ion trap has two configurations: the three dimensional form described above and the linear form made of 4 parallel electrodes. A simplified rectilinear
Rectilinear polygon
A rectilinear polygon is a polygon all of whose edges meet at right angles. Thus the interior angle at each vertex is either 90° or 270°. Rectilinear polygons are a special case of isothetic polygons....
configuration has also been used. The advantage of the linear design is in its simplicity, but this leaves a particular constraint on its modeling. To understand how this originates, it is helpful to visualize the linear form. The Paul trap is designed to create a saddle-shaped field to trap a charged ion, but with a quadrupole, this saddle-shaped electric field cannot be rotated about an ion in the centre. It can only 'flap' the field up and down. For this reason, the motions of a single ion in the trap are described by the Mathieu Equations
Mathieu function
In mathematics, the Mathieu functions are certain special functions useful for treating a variety of problems in applied mathematics, including*vibrating elliptical drumheads,*quadrupoles mass filters and quadrupole ion traps for mass spectrometry...
. These equations can only be solved numerically, or equivalently by computer simulations.

Ions in a quadrupole field experience restoring forces that drive them back toward the center of the trap. The motion of the ions in the field is described by solutions to the Mathieu equation
Mathieu function
In mathematics, the Mathieu functions are certain special functions useful for treating a variety of problems in applied mathematics, including*vibrating elliptical drumheads,*quadrupoles mass filters and quadrupole ion traps for mass spectrometry...
. When written for ion motion in a trap, the equation is

is a dimensionless parameter given by

are dimensionless trapping parameters. The parameter

is the radial frequency of the potential applied to the ring electrode. By substituting the expression for

into Equation 1, it can be shown that

The forces in each dimension are not coupled, thus the force acting on an ion in, for example, the x dimension is

is the quadrupolar potential, given by

is the applied electric potential and

are weighting factors, and

is a size parameter constant. In order to satisfy the Laplace Condition
Laplace operator
In mathematics the Laplace operator or Laplacian is a differential operator given by the divergence of the gradient of a function on Euclidean space. It is usually denoted by the symbols ∇·∇, ∇2 or Δ...
,

, it can be shown that

For an ion trap,

and for a quadrupole mass filter,

is the applied frequency in hertz
Hertz
The hertz is the SI unit of frequency defined as the number of cycles per second of a periodic phenomenon. One of its most common uses is the description of the sine wave, particularly those used in radio and audio applications....
.

Substituting Equation 7 into Equation 5 with

Substituting Equation 8 into Equation 4 leads to 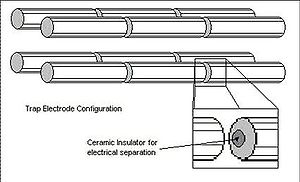 The linear ion trap uses a set of quadrupole rods to confine ions radially and a static electrical potential on-end electrodes to confine the ions axially. The linear form of the trap can be used as a selective mass filter, or as an actual trap by creating a potential well for the ions along the axis of the electrodes. Advantages of the linear trap design are increased ion storage capacity, faster scan times, and simplicity of construction (although quadrupole rod alignment is critical, adding a quality control constraint to their production. This constraint is additionally present in the machining requirements of the 3D trap).

Cylindrical ion traps have a cylindrical rather than a hyperbolic ring electrode. This configuration has been used in miniature arrays of traps.