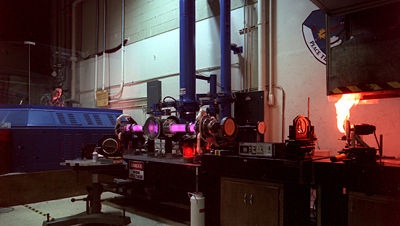 The carbon dioxide laser (CO2 laser) was one of the earliest gas laser
Gas laser
A gas laser is a laser in which an electric current is discharged through a gas to produce coherent light. The gas laser was the first continuous-light laser and the first laser to operate "on the principle of converting electrical energy to a laser light output...
s to be developed (invented by Kumar Patel of Bell Labs
Bell Labs
Bell Laboratories is the research and development subsidiary of the French-owned Alcatel-Lucent and previously of the American Telephone & Telegraph Company , half-owned through its Western Electric manufacturing subsidiary.Bell Laboratories operates its...
in 1964), and is still one of the most useful. Carbon dioxide
Carbon dioxide
Carbon dioxide is a naturally occurring chemical compound composed of two oxygen atoms covalently bonded to a single carbon atom...
lasers are the highest-power continuous wave laser
Laser
A laser is a device that emits light through a process of optical amplification based on the stimulated emission of photons. The term "laser" originated as an acronym for Light Amplification by Stimulated Emission of Radiation...
s that are currently available. They are also quite efficient: the ratio of output power to pump
Laser pumping
Laser pumping is the act of energy transfer from an external source into the gain medium of a laser. The energy is absorbed in the medium, producing excited states in its atoms. When the number of particles in one excited state exceeds the number of particles in the ground state or a less-excited...
power can be as large as 20%.

The CO2 laser produces a beam of infrared light with the principal wavelength
Wavelength
In physics, the wavelength of a sinusoidal wave is the spatial period of the wave—the distance over which the wave's shape repeats.It is usually determined by considering the distance between consecutive corresponding points of the same phase, such as crests, troughs, or zero crossings, and is a...
bands centering around 9.4 and 10.6 micrometers
Micrometre
A micrometer , is by definition 1×10-6 of a meter .In plain English, it means one-millionth of a meter . Its unit symbol in the International System of Units is μm...
.

The active laser medium
Active laser medium
The active laser medium is the source of optical gain within a laser. The gain results from the stimulated emission of electronic or molecular transitions to a lower energy state from a higher energy state...
(laser gain/amplification
Amplifier
Generally, an amplifier or simply amp, is a device for increasing the power of a signal.In popular use, the term usually describes an electronic amplifier, in which the input "signal" is usually a voltage or a current. In audio applications, amplifiers drive the loudspeakers used in PA systems to...
medium) is a gas discharge which is air-cooled (water-cooled in higher power applications). The filling gas within the discharge tube consists primarily of:
The specific proportions vary according to the particular laser.

Because CO2 lasers operate in the infrared, special materials are necessary for their construction. Typically, the mirror
Mirror
A mirror is an object that reflects light or sound in a way that preserves much of its original quality prior to its contact with the mirror. Some mirrors also filter out some wavelengths, while preserving other wavelengths in the reflection...
s are silvered, while windows and lenses are made of either germanium
Germanium
Germanium is a chemical element with the symbol Ge and atomic number 32. It is a lustrous, hard, grayish-white metalloid in the carbon group, chemically similar to its group neighbors tin and silicon. The isolated element is a semiconductor, with an appearance most similar to elemental silicon....
or zinc selenide
Zinc selenide
Zinc selenide , is a light yellow binary solid compound. It is an intrinsic semiconductor with a band gap of about 2.70 eV at 25 °C. ZnSe rarely occurs in nature...
. For high power applications, gold mirrors and zinc selenide windows and lenses are preferred. There are also diamond
Diamond
In mineralogy, diamond is an allotrope of carbon, where the carbon atoms are arranged in a variation of the face-centered cubic crystal structure called a diamond lattice. Diamond is less stable than graphite, but the conversion rate from diamond to graphite is negligible at ambient conditions...
windows and even lenses in use. Diamond windows are extremely expensive, but their high thermal conductivity and hardness make them useful in high-power applications and in dirty environments. Optical elements made of diamond can even be sand blasted without losing their optical properties. Historically, lenses and windows were made out of salt (either sodium chloride
Sodium chloride
Sodium chloride, also known as salt, common salt, table salt or halite, is an inorganic compound with the formula NaCl. Sodium chloride is the salt most responsible for the salinity of the ocean and of the extracellular fluid of many multicellular organisms...
or potassium chloride
Potassium chloride
The chemical compound potassium chloride is a metal halide salt composed of potassium and chlorine. In its pure state, it is odorless and has a white or colorless vitreous crystal appearance, with a crystal structure that cleaves easily in three directions. Potassium chloride crystals are...
). While the material was inexpensive, the lenses and windows degraded slowly with exposure to atmospheric moisture.

The most basic form of a CO2 laser consists of a gas discharge (with a mix close to that specified above) with a total reflector
Reflection (physics)
Reflection is the change in direction of a wavefront at an interface between two differentmedia so that the wavefront returns into the medium from which it originated. Common examples include the reflection of light, sound and water waves...
at one end, and an output coupler (usually a semi-reflective coated zinc selenide mirror) at the output end. The reflectivity of the output coupler
Output coupler
An output coupler is a partially reflective mirror used in lasers to extract a portion of the laser beam from the optical resonator....
is typically around 5–15%. The laser output may also be edge-coupled in higher power systems to reduce optical heating problems.

The CO2 laser can be constructed to have CW powers between milliwatts (mW) and hundreds of kilowatts (kW). It is also very easy to actively Q-switch
Q-switching
Q-switching, sometimes known as giant pulse formation, is a technique by which a laser can be made to produce a pulsed output beam. The technique allows the production of light pulses with extremely high peak power, much higher than would be produced by the same laser if it were operating in a...
a CO2 laser by means of a rotating mirror or an electro-optic switch, giving rise to Q-switched peak powers up to gigawatts (GW) of peak power.

Because the laser transitions are actually on vibration-rotation bands of a linear triatomic molecule, the rotational structure of the P and R bands can be selected by a tuning element in the laser cavity. Because transmissive materials in the infrared are rather lossy, the frequency
Frequency
Frequency is the number of occurrences of a repeating event per unit time. It is also referred to as temporal frequency.The period is the duration of one cycle in a repeating event, so the period is the reciprocal of the frequency...
tuning element is almost always a diffraction grating
Diffraction grating
In optics, a diffraction grating is an optical component with a periodic structure, which splits and diffracts light into several beams travelling in different directions. The directions of these beams depend on the spacing of the grating and the wavelength of the light so that the grating acts as...
. By rotating the diffraction grating, a particular rotational line of the vibrational transition can be selected. The finest frequency selection may also be obtained through the use of an etalon. In practice, together with isotopic substitution, this means that a continuous comb of frequencies separated by around 1 cm−1 (30 GHz) can be used that extend from 880 to 1090 cm−1. Such "line-tuneable" carbon dioxide lasers are principally of interest in research applications.

Because of the high power levels available (combined with reasonable cost for the laser), CO2 lasers are frequently used in industrial applications for cutting
Cutting
Cutting is the separation of a physical object, or a portion of a physical object, into two portions, through the application of an acutely directed force. An implement commonly used for cutting is the knife or in medical cases the scalpel...
and welding
Laser beam welding
Laser beam welding is a welding technique used to join multiple pieces of metal through the use of a laser. The beam provides a concentrated heat source, allowing for narrow, deep welds and high welding rates...
, while lower power level lasers are used for engraving. They are also very useful in surgical procedures because water (which makes up most biological tissue
Biological tissue
Tissue is a cellular organizational level intermediate between cells and a complete organism. A tissue is an ensemble of cells, not necessarily identical, but from the same origin, that together carry out a specific function. These are called tissues because of their identical functioning...
) absorbs this frequency of light very well. Some examples of medical uses are laser surgery, skin resurfacing ("laser facelift
Facelift
Facelift is the common name for rhytidectomy, a cosmetic surgery procedure.Facelift may also refer to:* Facelift , the revival of a product through cosmetic means such as changing its appearance...
s") (which essentially consist of burning the skin to promote collagen formation), and dermabrasion
Dermabrasion
Dermabrasion is a surgical procedure that involves the controlled abrasion of the upper layers of the skin with sandpaper or other mechanical means. Nowadays it has become common to use CO2 or Erbium:YAG laser as well. The procedure requires a local anaesthetic...
. Also, it could be used to treat certain skin conditions such as hirsuties papillaris genitalis
Hirsuties papillaris genitalis
Hirsuties coronae glandis are small saliences on the ridge of the glans of the male genital organs. It is a harmless anatomical variation. They are found significantly more often on uncircumcised men, and on younger men...
by removing embarrassing or annoying bumps, podules, etc. Researchers in Israel are experimenting with using CO2 lasers to weld human tissue, as an alternative to traditional sutures.

The common plastic poly (methyl methacrylate) (PMMA) absorbs IR light in the 2.8–25 µm wavelength band, so CO2 lasers have been used in recent years for fabricating microfluidic devices from it, with channel widths of a few hundred micrometers.

Because the atmosphere
Earth's atmosphere
The atmosphere of Earth is a layer of gases surrounding the planet Earth that is retained by Earth's gravity. The atmosphere protects life on Earth by absorbing ultraviolet solar radiation, warming the surface through heat retention , and reducing temperature extremes between day and night...
is quite transparent to infrared light, CO2 lasers are also used for military rangefinding
Rangefinder
A rangefinder is a device that measures distance from the observer to a target, for the purposes of surveying, determining focus in photography, or accurately aiming a weapon. Some devices use active methods to measure ; others measure distance using trigonometry...
using LIDAR
LIDAR
LIDAR is an optical remote sensing technology that can measure the distance to, or other properties of a target by illuminating the target with light, often using pulses from a laser...
techniques.