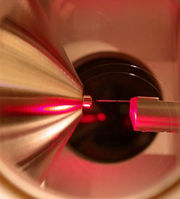 Electrospray ionization is a technique used in mass spectrometry
Mass spectrometry
Mass spectrometry is an analytical technique that measures the mass-to-charge ratio of charged particles.It is used for determining masses of particles, for determining the elemental composition of a sample or molecule, and for elucidating the chemical structures of molecules, such as peptides and...
to produce ions. It is especially useful in producing ions from macromolecule
Macromolecule
A macromolecule is a very large molecule commonly created by some form of polymerization. In biochemistry, the term is applied to the four conventional biopolymers , as well as non-polymeric molecules with large molecular mass such as macrocycles...
s because it overcomes the propensity of these molecules to fragment when ionized. The development of electrospray ionization for the analysis of biological macromolecules was rewarded with the attribution of the Nobel Prize in Chemistry
Nobel Prize in Chemistry
The Nobel Prize in Chemistry is awarded annually by the Royal Swedish Academy of Sciences to scientists in the various fields of chemistry. It is one of the five Nobel Prizes established by the will of Alfred Nobel in 1895, awarded for outstanding contributions in chemistry, physics, literature,...
to John Bennett Fenn in 2002.
One of the original instruments used by Dr. Fenn is on display at the Chemical Heritage Foundation in Philadelphia, Pennsylvania.

The liquid containing the analyte(s) of interest is dispersed by electrospray into a fine aerosol. Because the ion formation involves extensive solvent evaporation, the typical solvents for electrospray ionization are prepared by mixing water with volatile organic compounds (e.g. methanol, acetonitrile). To decrease the initial droplet size, compounds that increase the conductivity (e.g. acetic acid) are customarily added to the solution. Large-flow electrosprays can benefit from additional nebulization
Nebulizer
In medicine, a nebulizer is a device used to administer medication in the form of a mist inhaled into the lungs....
by an inert gas such as nitrogen
Nitrogen
Nitrogen is a chemical element that has the symbol N, atomic number of 7 and atomic mass 14.00674 u. Elemental nitrogen is a colorless, odorless, tasteless, and mostly inert diatomic gas at standard conditions, constituting 78.08% by volume of Earth's atmosphere...
. The aerosol is sampled into the first vacuum stage of a mass spectrometer through a capillary, which can be heated to aid further solvent evaporation from the charged droplets. The solvent evaporates from a charged droplet until it becomes unstable upon reaching its Rayleigh limit. At this point, the droplet deforms and emits charged jets in a process known as Coulomb fission. During the fission, the droplet loses a small percentage of its mass (1.0-2.3%) along with a relatively large percentage of its charge (10-18%).

There are two major theories that explain the final production of gas-phase ions:

While there is no definite scientific proof, a large body of indirect evidence suggests that small ions are liberated into the gas phase through the ion evaporation mechanism, while larger ions form by charged residue mechanism.

The ions observed by mass spectrometry may be quasimolecular ions created by the addition of a proton
Proton
The proton is a subatomic particle with the symbol or and a positive electric charge of 1 elementary charge. One or more protons are present in the nucleus of each atom, along with neutrons. The number of protons in each atom is its atomic number....
(a hydrogen ion) and denoted [M + H]+, or of another cation such as sodium
Sodium
Sodium is a chemical element with the symbol Na and atomic number 11. It is a soft, silvery-white, highly reactive metal and is a member of the alkali metals; its only stable isotope is 23Na. It is an abundant element that exists in numerous minerals, most commonly as sodium chloride...
ion, [M + Na]+, or the removal of a proton, [M − H]−. Multiply charged ions such as [M + nH]n+ are often observed. For large macromolecules, there can be many charge states, resulting in a characteristic charge state envelope. All these are even-electron ion species: electron
Electron
The electron is a subatomic particle with a negative elementary electric charge. It has no known components or substructure; in other words, it is generally thought to be an elementary particle. An electron has a mass that is approximately 1/1836 that of the proton...
s (alone) are not added or removed, unlike in some other ionization sources. The analytes are sometimes involved in electrochemical processes, leading to shifts of the corresponding peaks in the mass spectrum
Mass spectrum
A mass spectrum is an intensity vs. m/z plot representing a chemical analysis. Hence, the mass spectrum of a sample is a pattern representing the distribution of ions by mass in a sample. It is a histogram usually acquired using an instrument called a mass spectrometer...
.

Electrospray ionization is also ideal in studying noncovalent gas phase interactions. The electrospray process is capable of transferring liquid-phase noncovalent complexes into the gas phase without disrupting the noncovalent interaction. This means that a cluster of two molecules can be studied in the gas phase by other mass spectrometry techniques. An interesting example of this is studying the interactions between enzyme
Enzyme
Enzymes are proteins that catalyze chemical reactions. In enzymatic reactions, the molecules at the beginning of the process, called substrates, are converted into different molecules, called products. Almost all chemical reactions in a biological cell need enzymes in order to occur at rates...
s and drugs which are inhibitors of the enzyme. Because inhibitors generally work by noncovalently binding to its target enzyme with reasonable affinity the noncovalent complex can be studied in this way. Competition studies between STAT6 and inhibitors have been done in this way to screen for potential new drug candidates.