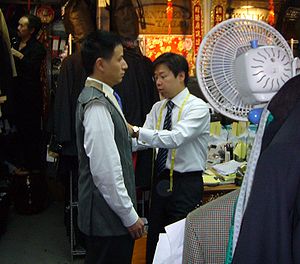 A tailor is a person who makes, repairs, or alters clothing professionally, especially suits and men's clothing.

Although the term dates to the thirteenth century, tailor took on its modern sense in the late eighteenth century, and now refers to makers of men's and women's suits
Suit (clothing)
In clothing, a suit is a set of garments made from the same cloth, consisting of at least a jacket and trousers. Lounge suits are the most common style of Western suit, originating in the United Kingdom as country wear...
, coat
Coat (clothing)
A coat is a long garment worn by both men and women, for warmth or fashion. Coats typically have long sleeves and are open down the front, closing by means of buttons, zippers, hook-and-loop fasteners, toggles, a belt, or a combination of some of these...
s, trousers
Trousers
Trousers are an item of clothing worn on the lower part of the body from the waist to the ankles, covering both legs separately...
, and similar garments, usually of wool
Wool
Wool is the textile fiber obtained from sheep and certain other animals, including cashmere from goats, mohair from goats, qiviut from muskoxen, vicuña, alpaca, camel from animals in the camel family, and angora from rabbits....
, linen
Linen
Linen is a textile made from the fibers of the flax plant, Linum usitatissimum. Linen is labor-intensive to manufacture, but when it is made into garments, it is valued for its exceptional coolness and freshness in hot weather....
, or silk
Silk
Silk is a natural protein fiber, some forms of which can be woven into textiles. The best-known type of silk is obtained from the cocoons of the larvae of the mulberry silkworm Bombyx mori reared in captivity...
.

The term refers to a set of specific hand and machine sewing and pressing techniques that are unique to the construction of traditional jackets. Retailers of tailored suits often take their services internationally, traveling to various cities, allowing the client to be measured locally.

Traditional tailoring is called bespoke
Bespoke
Bespoke is a term employed in a variety of applications to mean an item custom-made to the buyer's specification...
tailoring in the United Kingdom, where the heart of the trade
Trade
Trade is the transfer of ownership of goods and services from one person or entity to another. Trade is sometimes loosely called commerce or financial transaction or barter. A network that allows trade is called a market. The original form of trade was barter, the direct exchange of goods and...
is in London's Savile Row
Savile Row
Savile Row is a shopping street in Mayfair, central London, famous for its traditional men's bespoke tailoring. The term "bespoke" is understood to have originated in Savile Row when cloth for a suit was said to "be spoken for" by individual customers...
, and custom tailoring in the United States and Hong Kong
Hong Kong
Hong Kong is one of two Special Administrative Regions of the People's Republic of China , the other being Macau. A city-state situated on China's south coast and enclosed by the Pearl River Delta and South China Sea, it is renowned for its expansive skyline and deep natural harbour...
. This is unlike made to measure
Made to measure
Made to measure typically refers to clothing that is sewn from a standard-sized base pattern. A tailored suit is a common example of a made-to-measure garment...
which uses pre-existing patterns.
A bespoke garment or suit is completely original and unique to each customer. 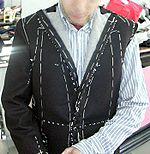 As the tailoring profession has evolved, so too have the methods of tailoring. There are a number of distinctive business models which modern tailors may practice. While some may practice many, there are others who will practice only one or two.

Local tailoring is as the name implies. Typically the tailor is met locally and the garment produced locally. This method enables the tailor to take professional measurements, assess posture and body shape to make unique modifications to the garment. Local tailors will typically have a showroom or shopfront allowing clients to choose fabrics from samples or return the garment easily should it require further modification. This is the most traditional form of tailoring. Sometimes local tailoring can attract a global clientele, Sam's Tailor
Sam's Tailor
Sam's Tailor is a tailor located in Hong Kong. The shop was founded by Sam Melwani in 1957 and is still run by his sons, Manu and Sham Melwani, as well as his grandson Roshan Melwani...
of Hong Kong
Hong Kong
Hong Kong is one of two Special Administrative Regions of the People's Republic of China , the other being Macau. A city-state situated on China's south coast and enclosed by the Pearl River Delta and South China Sea, it is renowned for its expansive skyline and deep natural harbour...
being a notable example of this. 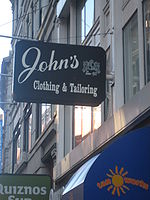 Distance tailoring involves ordering a garment from an out-of-town tailor enabling cheaper labour to be used. In practice this can now be done on a global scale via e-commerce websites. Unlike local tailoring, customers must take their own measurements, fabric selection must be made from a photo and if further alterations are required the garment must be shipped. Today, the most common platform for distance tailoring is via online tailors. Examples of this include Australian based InStitchu

Traveling Tailors are an attempt to blend the best of local and distance tailoring. Commonly these tailors will operate out of areas which have a strong tailoring trade or low labour costs but spend much of their time traveling to major cities to meet with clients. On their visits they take measurements and showcase physical fabric samples, once the client places an order, the garment is manufactured elsewhere and delivered via courier or mail. This method has the advantage of allowing tailors to meet with their clients and make a professional assessment of the fit with the lower labour costs of distance tailoring. Often though, there will not be a store front so in the event further alterations are needed the garment must still be shipped away. Some examples of Hong Kong based high-quality tailors who operate in the way include Ying Tai Tailor., ANS Fashions
ANS fashions
ANS Fashions is a Bespoke Tailoring company based in Kowloon, Hong Kong. They have adopted an international business model with representatives traveling internationally to take orders which are then manufactured in Hong Kong...
and Raja Fashions.

Sewing professional is the most general term for those who make their living by sewing, teaching, writing about sewing, or retailing sewing supplies. They may work out of their home, a studio, or retail shop, and may work part-time or full-time. They may be any or all or the following sub-specialties:


Tailor as a surname

The profession's denomination, Tailor, is a common surname in many languages: Taylor
Taylor (surname)
Taylor is a surname in the English language which originated as an occupational surname in England The name is derived from the Old French tailleur, which is in turn derived from the Late Latin taliator, from taliare meaning "to cut"...
(English), Schneider (German), Siuvejas (Lithuanian), Szabó (Hungarian), Croitoru (Romanian), Sastre (Spanish), Krawiec (Kravitz) (Polish), Portnoy (Russian), Krejčí (Czech), Darzi (Hindi
Hindi
Standard Hindi, or more precisely Modern Standard Hindi, also known as Manak Hindi , High Hindi, Nagari Hindi, and Literary Hindi, is a standardized and sanskritized register of the Hindustani language derived from the Khariboli dialect of Delhi...
/Urdu
Urdu
Urdu is a register of the Hindustani language that is identified with Muslims in South Asia. It belongs to the Indo-European family. Urdu is the national language and lingua franca of Pakistan. It is also widely spoken in some regions of India, where it is one of the 22 scheduled languages and an...
), Kleermaker(s) (Dutch), Alfaiate (Portuguese), Al-Khayyat / الخياط (Arabic), Chait / חייט (Hebrew), Raftis /Ράφτης (Greek).

In the movie Meeting Venus
Meeting Venus
Meeting Venus is a 1991 British–American-Japanese film directed by the Hungarian director István Szabó and starring Glenn Close, Niels Arestrup, Marián Labuda, Victor Poletti, Jay O. Sanders, Maria de Medeiros and Johanna ter Steege...
(written and directed by István Szabó
István Szabó
István Szabó is a Hungarian film director, screenwriter, and opera director.Szabó is the most internationally famous Hungarian filmmaker since the late 1960s. Working in the tradition of European, auteurist art cinema, he has made films that represent many of the psychological and political...
), many of the characters have the cognates ("blood relative") of the surname Tailor from different languages.