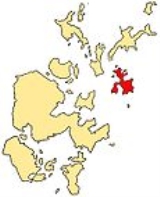 Encyclopedia
Stronsay is an island
Island
An island or isle is any piece of sub-continental land that is surrounded by water. Very small islands such as emergent land features on atolls can be called islets, cays or keys. An island in a river or lake may be called an eyot , or holm...
in Orkney, off the north coast of Scotland
Scotland
Scotland is a country that is part of the United Kingdom. Occupying the northern third of the island of Great Britain, it shares a border with England to the south and is bounded by the North Sea to the east, the Atlantic Ocean to the north and west, and the North Channel and Irish Sea to the...
. The main village is Whitehall
Whitehall, Orkney
Whitehall is the village on the island of Stronsay, in the Orkney Islands of Scotland. It is a small village with about 50 houses. It also has a shop, a café and heritage centre, known as the Fish Mart; the Stronsay Hotel, with attached pub; a post office, a fisherman's pier and a ferry...
, home to a heritage centre
Heritage centre
A heritage centre is a museum facility primarily dedicated to the presentation of historical and cultural information about a place and its people, including, to some degree, natural features...
. It is 3275 hectares (13 sq mi) in size, and 44 metres (144 ft) at its highest point.

Sights on the island include the Vat of Kirbister natural arch and seabird
Seabird
Seabirds are birds that have adapted to life within the marine environment. While seabirds vary greatly in lifestyle, behaviour and physiology, they often exhibit striking convergent evolution, as the same environmental problems and feeding niches have resulted in similar adaptations...
s including arctic tern
Arctic Tern
The Arctic Tern is a seabird of the tern family Sternidae. This bird has a circumpolar breeding distribution covering the Arctic and sub-Arctic regions of Europe, Asia, and North America...
s.

Orkney Ferries
Orkney Ferries
Orkney Ferries is a company operating inter-island ferry services in Orkney, to the north of mainland Scotland.-History:The company is owned by the Orkney Islands Council and was established in 1960 as the Orkney Islands Shipping Company....
sail from Whitehall to Kirkwall
Kirkwall
Kirkwall is the biggest town and capital of Orkney, off the coast of northern mainland Scotland. The town is first mentioned in Orkneyinga saga in the year 1046 when it is recorded as the residence of Rögnvald Brusason the Earl of Orkney, who was killed by his uncle Thorfinn the Mighty...
on the Orkney Mainland, and planes fly there from the island's airstrip.

There is one school on the island which is for both Primary and Secondary pupils.

Two flint arrowheads discovered at a site investigated by Orkney College
Orkney College
Orkney College is a further and higher education college in Orkney, an archipelago in northern Scotland. It is an academic partner in the University of the Highlands and Islands....
in April 2007 are believed to date from the late Paleolithic
Paleolithic
The Paleolithic Age, Era or Period, is a prehistoric period of human history distinguished by the development of the most primitive stone tools discovered , and covers roughly 99% of human technological prehistory...
or early Mesolithic
Mesolithic
The Mesolithic is an archaeological concept used to refer to certain groups of archaeological cultures defined as falling between the Paleolithic and the Neolithic....
periods some 10-12,000 years ago. They were found amongst a scattered collection of other tools on a farm. If confirmed they could be the earliest human artifacts found so far in Scotland.

The kelp burning industry thrived in the 18th century, and some of the ruins of kilns can still be seen. It was started by James Fea of Whitehall in 1727, and lasted into the early 19th century.

The Stronsay beast
Stronsay Beast
The Stronsay beast was a large, dead carcass or globster that washed ashore on the island of Stronsay , in the Orkney Islands, after a storm on September 25, 1808...
was a mysterious, decomposing corpse of a sea-creature that was stranded in 1808. The carcass measured 55 feet (16.8 m) in length, with the "neck" 15 feet and the circumference of the body 10 feet. The corpse created a great stir, with some proclaiming it a sea serpent
Sea serpent
A sea serpent or sea dragon is a type of sea monster either wholly or partly serpentine.Sightings of sea serpents have been reported for hundreds of years, and continue to be claimed today. Cryptozoologist Bruce Champagne identified more than 1,200 purported sea serpent sightings...
, but others have claimed it was a decayed basking shark
Basking shark
The basking shark is the second largest living fish, after the whale shark. It is a cosmopolitan migratory species, found in all the world's temperate oceans. It is a slow moving and generally harmless filter feeder and has anatomical adaptations to filter feeding, such as a greatly enlarged...
. 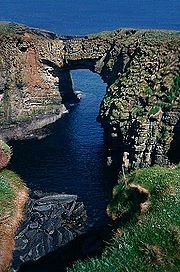 Like nearly all of Orkney, Stronsay is made up of old red sandstone
Old Red Sandstone
The Old Red Sandstone is a British rock formation of considerable importance to early paleontology. For convenience the short version of the term, 'ORS' is often used in literature on the subject.-Sedimentology:...
which has produced a fine soil in many places. It is generally low lying.

With an area of 33 square kilometres (13 sq mi) it is the seventh largest of the Orkney Islands. Surrounding small islands include Linga Holm, Papa Stronsay
Papa Stronsay
Papa Stronsay is a small island in Orkney, Scotland, lying north east of Stronsay. It is in size, and at its highest point.According to folklore, some of the natives were descended from a female selkie. This was because they had horny skin on their feet and hands, and permanently smelt of...
, the Holm of Huip
Holm of Huip
The Holm of Huip is a small island in the Orkney Islands, in Spurness Sound to the north west of Stronsay.The Holm has a cairn on it, and a number of grey seals.-Geography and geology:Like most of Orkney, the Holm is formed from Old Red Sandstone....
(named after a district in north west Stronsay) and the Holms of Spurness. To the north is Sanday
Sanday, Orkney
Sanday is one of the inhabited islands in the Orkney Islands, off the north coast of Scotland. With an area of , it is the third largest of the Orkney Islands. The main centres of population are Lady Village and Kettletoft. Sanday can be reached by Orkney Ferries or plane from Kirkwall on the...
, to the north west Eday
Eday
Eday is one of the Orkney Islands, which are located to the north of the Scottish mainland in the United Kingdom. Eday is located in the North Isles of Orkney, and is about north of the main island of Orkney Mainland...
, Shapinsay
Shapinsay
Shapinsay is one of the Orkney Islands off the north coast of mainland Scotland. There is one village on the island, Balfour, from which roll-on/roll-off car ferries sail to Kirkwall on the Orkney Mainland...
and Mainland Orkney to the south west, and Auskerry
Auskerry
Auskerry is a small island in eastern Orkney, Scotland. It lies in the North Sea south of Stronsay and has a lighthouse, completed in 1866.-Description:...
due south.

While the landscape is treeless, the fertile soil supports a wide variety of wild flowers including oysterplant, frog orchid
Frog Orchid
The Frog Orchid, or Coeloglossum viride, also known as the Long-Bracted Green Orchid and Dactylorhiza viridis is a monotypic genus of the family Orchidaceae generally found within the palearctic ecozone throughout the mid to northern United States through Canada, and in the British Isles and parts...
s, adder's tongue
Ophioglossum
Ophioglossum is a genus of about 25-30 species of Ophioglossales in the family Ophioglossaceae, with a cosmopolitan but primarily tropical and subtropical distribution. The name Ophioglossum comes from the Greek, and means "snake-tongue".Adders-tongues are so-called because the spore-bearing stalk...
, and also a naturalised population of Patagonian ragwort.

There are a wide variety of birds on the island, and birdwatchers have recorded many rarities here. The common birds include Whooper Swan
Whooper Swan
The Whooper Swan , Cygnus cygnus, is a large Northern Hemisphere swan. It is the Eurasian counterpart of the North American Trumpeter Swan. An old name for the Whooper Swan is Elk; it is so called in Francis Willughby and John Ray's Ornithology of 1676.-Description:The Whooper Swan is similar in...
, various ducks and geese including the Greater White-fronted Goose, as well as Common Redshank
Common Redshank
The Common Redshank or simply Redshank is an Eurasian wader in the large family Scolopacidae.- Description and systematics :...
, Common Snipe
Common Snipe
The Common Snipe is a small, stocky wader native to the Old World. The breeding habitat is marshes, bogs, tundra and wet meadows throughout northern Europe and northern Asia...
, Common Quail
Common Quail
The Common Quail, Coturnix coturnix, is a small bird in the pheasant family Phasianidae. It is widespread and is found in parts of Europe, .- Description :It is a small rotund bird, essentially streaked brown with...
, Great Skua
Great Skua
The Great Skua, Stercorarius skua, is a large seabird in the skua family Stercorariidae. In Britain, it is sometimes known by the name Bonxie, a Shetland name of unknown origin.-Description:...
, Corn Bunting
Corn Bunting
The Corn Bunting, Miliaria calandra, is a passerine bird in the bunting family Emberizidae, a group now separated by most modern authors from the finches, Fringillidae...
and Corncrake (rare in Scotland).

The more unusual occasional visitors which have been recorded include: