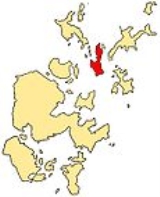 Encyclopedia
Eday is one of the Orkney Islands, which are located to the north of the Scottish mainland
Scotland
Scotland is a country that is part of the United Kingdom. Occupying the northern third of the island of Great Britain, it shares a border with England to the south and is bounded by the North Sea to the east, the Atlantic Ocean to the north and west, and the North Channel and Irish Sea to the...
in the United Kingdom
United Kingdom
The United Kingdom of Great Britain and Northern IrelandIn the United Kingdom and Dependencies, other languages have been officially recognised as legitimate autochthonous languages under the European Charter for Regional or Minority Languages...
. Eday is located in the North Isles of Orkney, and is about 15 miles (24.1 km) north of the main island of Orkney Mainland
The Mainland, Orkney
The Mainland is the main island of Orkney, Scotland. Both of Orkney's burghs, Kirkwall and Stromness, lie on the island, which is also the heart of Orkney's ferry and air connections....
. With an area of 11 square miles (28.5 km²), Eday is the ninth largest of the Orkney Islands.

The centre of Eday is moorland
Moorland
Moorland or moor is a type of habitat, in the temperate grasslands, savannas, and shrublands biome, found in upland areas, characterised by low-growing vegetation on acidic soils and heavy fog...
covered with heather
Ericaceae
The Ericaceae, commonly known as the heath or heather family, is a group of mostly calcifuge flowering plants. The family is large, with roughly 4000 species spread across 126 genera, making it the 14th most speciose family of flowering plants...
, and the island's main industries have been peat
Peat
Peat is an accumulation of partially decayed vegetation matter or histosol. Peat forms in wetland bogs, moors, muskegs, pocosins, mires, and peat swamp forests. Peat is harvested as an important source of fuel in certain parts of the world...
extraction and limestone
Limestone
Limestone is a sedimentary rock composed largely of the minerals calcite and aragonite, which are different crystal forms of calcium carbonate . Many limestones are composed from skeletal fragments of marine organisms such as coral or foraminifera....
quarrying. Attractions on the island include the Stone of Setter standing stone
Standing stone
Standing stones, orthostats, liths, or more commonly megaliths are solitary stones set vertically in the ground and come in many different varieties....
and the chambered cairn
Chambered cairn
A chambered cairn is a burial monument, usually constructed during the Neolithic, consisting of a cairn of stones inside which a sizeable chamber was constructed. Some chambered cairns are also passage-graves....
s of Vinquoy, Braeside and Huntersquoy. Eday is also known for its seabird
Seabird
Seabirds are birds that have adapted to life within the marine environment. While seabirds vary greatly in lifestyle, behaviour and physiology, they often exhibit striking convergent evolution, as the same environmental problems and feeding niches have resulted in similar adaptations...
s and for Carrick house, built in 1633, where the pirate John Gow
John Gow
John Gow was a notorious pirate whose short career was immortalized by Charles Johnson in A General History of the Pyrates. Little is known of his life, except from an account by Daniel Defoe, which is often considered unreliable, the report on his execution, and an account by Mr...
was captured.

Eday can be reached by both sea and air from the Orkney Mainland. Orkney Ferries
Orkney Ferries
Orkney Ferries is a company operating inter-island ferry services in Orkney, to the north of mainland Scotland.-History:The company is owned by the Orkney Islands Council and was established in 1960 as the Orkney Islands Shipping Company....
provide ferry crossings to Backaland
Backaland
Backaland is a village in Orkney, Scotland. It is on the island of Eday, towards the south of the island....
on Eday from Kirkwall
Kirkwall
Kirkwall is the biggest town and capital of Orkney, off the coast of northern mainland Scotland. The town is first mentioned in Orkneyinga saga in the year 1046 when it is recorded as the residence of Rögnvald Brusason the Earl of Orkney, who was killed by his uncle Thorfinn the Mighty...
on Orkney Mainland. The Orkney inter-island air service, operated by Loganair
Loganair
Loganair is a Scottish airline with its registered office on the grounds of Glasgow International Airport and in Paisley, Renfrewshire, Scotland. Loganair operates scheduled services under a Flybe franchise in mainland Scotland and to Orkney, Shetland and the Western Isles. In addition it operates...
, connects Kirkwall Airport
Kirkwall Airport
Kirkwall Airport is the main airport serving the Orkney Islands in Scotland. It is located southeast of Kirkwall and is owned by Highlands and Islands Airports Limited...
with Eday's London Airport
Eday Airport
Eday Airport is located on Eday in Orkney, Scotland. Due to its location close to the Bay of London it is known locally as London Airport....
.

The European Marine Energy Centre (EMEC) based at Stromness
Stromness
Stromness is the second-biggest town in Orkney, Scotland. It is in the south-west of Mainland Orkney. It is also a parish, with the town of Stromness as its capital.-Etymology:...
in Orkney is a new Scottish Executive
Scottish Executive
The Scottish Government is the executive arm of the devolved government of Scotland. It was established in 1999 as the Scottish Executive, from the extant Scottish Office, and the term Scottish Executive remains its legal name under the Scotland Act 1998...
-backed research facility. They have installed a wave testing system at Billia Croo on the Orkney mainland
The Mainland, Orkney
The Mainland is the main island of Orkney, Scotland. Both of Orkney's burghs, Kirkwall and Stromness, lie on the island, which is also the heart of Orkney's ferry and air connections....
and a tidal power testing station on Eday.

Eday Partnership, the local development trust
Development trust
Development Trusts are organisations which operate in the United Kingdom that are:*community based, owned and led*engaged in the economic, environmental and social regeneration of a defined area or community...
is active in promoting the island's economy and has instigated numerous projects, including Eday Heritage Centre, and the purchase of a new diesel tank for the island. A community-owned wind turbine is planned. Eday's various community projects contributed £380,000 to the island's economy from 2005-7.

In July 2008 the island celebrated the opening of the Eday Heritage and Visitor Centre in the restored former Baptist Church. There is a heritage display area, a permanent archive, a café and a tourist information point. The Eday Oral History Project, which records life on the island in the past, is also housed within the centre.