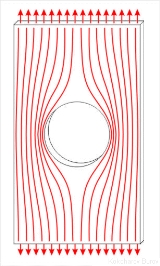 A stress concentration is a location in an object where stress
Stress (physics)
In continuum mechanics, stress is a measure of the internal forces acting within a deformable body. Quantitatively, it is a measure of the average force per unit area of a surface within the body on which internal forces act. These internal forces are a reaction to external forces applied on the body...
is concentrated. An object is strongest when force is evenly distributed over its area, so a reduction in area, e.g. caused by a crack, results in a localized increase in stress. A material can fail, via a propagating crack, when a concentrated stress exceeds the material's theoretical cohesive strength. The real fracture
Fracture
A fracture is the separation of an object or material into two, or more, pieces under the action of stress.The word fracture is often applied to bones of living creatures , or to crystals or crystalline materials, such as gemstones or metal...
strength of a material is always lower than the theoretical value because most materials contain small cracks or contaminants (especially foreign particles) that concentrate stress. Fatigue
Fatigue (material)
'In materials science, fatigue is the progressive and localized structural damage that occurs when a material is subjected to cyclic loading. The nominal maximum stress values are less than the ultimate tensile stress limit, and may be below the yield stress limit of the material.Fatigue occurs...
cracks always start at stress raisers, so removing such defects increases the fatigue strength.

Geometric discontinuities cause an object to experience a local increase in the intensity of a stress field. The examples of shapes that cause these concentrations are: cracks, sharp corners, holes and, changes in the cross-sectional area of the object. High local stresses can cause the object to fail more quickly than if it wasn't there. Engineers must design the geometry to minimize stress concentrations.

A counter-intuitive method of reducing one of the worst types of stress concentrations, a crack
Fracture
A fracture is the separation of an object or material into two, or more, pieces under the action of stress.The word fracture is often applied to bones of living creatures , or to crystals or crystalline materials, such as gemstones or metal...
, is to drill
Drill
A drill or drill motor is a tool fitted with a cutting tool attachment or driving tool attachment, usually a drill bit or driver bit, used for drilling holes in various materials or fastening various materials together with the use of fasteners. The attachment is gripped by a chuck at one end of...
a large hole at the end of the crack. The drilled hole, with its relatively large diameter
Diameter
In geometry, a diameter of a circle is any straight line segment that passes through the center of the circle and whose endpoints are on the circle. The diameters are the longest chords of the circle...
, causes a smaller stress concentration than the sharp end of a crack. This is however, a temporary solution that must be corrected at the first opportune time.

It is important to systematically check for possible stress concentrations caused by cracks—there is a critical crack length of 2a for which, when this value is exceeded, the crack proceeds to definite catastrophic failure. This ultimate failure is definite since the crack will propagate on its own once the length is greater than 2a. (There is no additional energy required to increase the crack length so the crack will continue to enlarge until the material fails.) The origins of the value 2a can be understood through Griffith's theory of brittle fracture.

The term "stress raiser" is used in orthopedics
Orthopedics
Orthopedics is the study of the musculoskeletal system. The Greek word 'ortho' means straight or correct and 'pedics' comes from the Greek 'pais' meaning children. For many centuries, orthopedists have been involved in the treatment of crippled children...
; a focus point of stress on an implanted
Implant (medicine)
An implant is a medical device manufactured to replace a missing biological structure, support a damaged biological structure, or enhance an existing biological structure. Medical implants are man-made devices, in contrast to a transplant, which is a transplanted biomedical tissue...
orthosis is very likely to be its point of failure.

Classic cases of metal
Metallurgy
Metallurgy is a domain of materials science that studies the physical and chemical behavior of metallic elements, their intermetallic compounds, and their mixtures, which are called alloys. It is also the technology of metals: the way in which science is applied to their practical use...
failures due to stress concentrations include metal fatigue
Metal Fatigue
Metal Fatigue , is a futuristic science fiction, real-time strategy computer game developed by Zono Incorporated and published by Psygnosis and TalonSoft .-Plot:...
at the corners of the windows of the De Havilland Comet
De Havilland Comet
The de Havilland DH 106 Comet was the world's first commercial jet airliner to reach production. Developed and manufactured by de Havilland at the Hatfield, Hertfordshire, United Kingdom headquarters, it first flew in 1949 and was a landmark in aeronautical design...
aircraft
Aircraft
An aircraft is a vehicle that is able to fly by gaining support from the air, or, in general, the atmosphere of a planet. An aircraft counters the force of gravity by using either static lift or by using the dynamic lift of an airfoil, or in a few cases the downward thrust from jet engines.Although...
and brittle fractures at the corners of hatches in Liberty ship
Liberty ship
Liberty ships were cargo ships built in the United States during World War II. Though British in conception, they were adapted by the U.S. as they were cheap and quick to build, and came to symbolize U.S. wartime industrial output. Based on vessels ordered by Britain to replace ships torpedoed by...
s in cold and stressful conditions in winter storms in the Atlantic Ocean
Atlantic Ocean
The Atlantic Ocean is the second-largest of the world's oceanic divisions. With a total area of about , it covers approximately 20% of the Earth's surface and about 26% of its water surface area...
.

The maximum stress felt near a crack occurs in the area of lowest radius of curvature. In an elliptical crack of length

, under an applied external stress

, the stress at the ends of the major axes is given by:

where ρ is the radius of curvature of the crack tip. A stress concentration factor is the ratio of the highest stress (

) to a reference stress (

) of the gross cross-section. As the radius of curvature approaches zero, the maximum stress approaches infinity. Note that the stress concentration factor is a function of the geometry of a crack, and not of its size. These factors can be found in typical engineering reference materials to predict the stresses that could otherwise not be analyzed using strength of materials
Strength of materials
In materials science, the strength of a material is its ability to withstand an applied stress without failure. The applied stress may be tensile, compressive, or shear. Strength of materials is a subject which deals with loads, deformations and the forces acting on a material. A load applied to a...
approaches. This is not to be confused with 'Stress Intensity Factor'.

There are experimental methods for measuring stress concentration factor including photoelastic stress analysis
Photoelasticity
Photoelasticity is an experimental method to determine the stress distribution in a material. The method is mostly used in cases where mathematical methods become quite cumbersome. Unlike the analytical methods of stress determination, photoelasticity gives a fairly accurate picture of stress...
, brittle coatings or strain gauge
Strain gauge
A strain gauge is a device used to measure the strain of an object. Invented by Edward E. Simmons and Arthur C. Ruge in 1938, the most common type of strain gauge consists of an insulating flexible backing which supports a metallic foil pattern. The gauge is attached to the object by a suitable...
s. While all these approaches have been successful, all also have experimental, environmental, accuracy and/or measurement disadvantages.

During the design phase, there are multiple approaches to estimating stress concentration factors. Several catalogs of stress concentration factors have been published. Perhaps most famous is Stress Concentration Design Factors by Peterson, first published in 1953. Finite element method
Finite element method
The finite element method is a numerical technique for finding approximate solutions of partial differential equations as well as integral equations...
s are commonly used in design today. Theoretical approaches, using elasticity or strength of material considerations, can lead to equations similar to the one shown above.

There may be small differences between the catalog, FEM and theoretical values calculated. Each method has advantages and disadvantages. Many catalog curves were derived from experimental data. FEM calculates the peak stresses directly and nominal stresses may be easily found by integrating stresses in the surrounding material. The result is that engineering judgment may have to be used when selecting which data applies to making a design decision. Many theoretical stress concentration factors have been derived for infinite or semi-infinite geometries which may not be analyzable and are not testable in a stress lab, but tackling a problem using two or more of these approaches will allow an engineer to achieve an accurate conclusion.