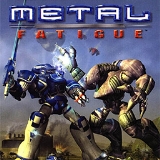 Encyclopedia
Metal Fatigue is a futuristic science fiction, real-time strategy
Real-time strategy
Real-time strategy is a sub-genre of strategy video game which does not progress incrementally in turns. Brett Sperry is credited with coining the term to market Dune II....
computer game developed by Zono Incorporated
Zono Incorporated
Zono Incorporated, named for its founders, Ed Zobrist and "Novak", was a video game development studio founded in 1991, in the city of Costa Mesa, California.Zono is best known as the developer of the cult classic Mr...
and published by Psygnosis (in Europe) and TalonSoft
TalonSoft
TalonSoft was a Baltimore, Maryland-based computer game developer founded in 1995 by Jim Rose and John Davidson. The company specialized in wargames; many of its releases were acclaimed within the wargaming community....
(a Take2
Take-Two Interactive
Take-Two Interactive Software, Inc. is a major American publisher, developer, and distributor of video games and video game peripherals. Take-Two wholly owns 2K Games and Rockstar Games. The company's headquarters are in New York City, with international headquarters in Windsor, United Kingdom...
company in the United States).

During the 23rd century man has discovered faster-than-light travel and finally reached the stars. Galactic exploration has confirmed man's worst two fears. First, an alien warlike race with vastly superior technology does exist. The exploration fleet reported sentient structures which appear to have been annihilated eons ago, scattered all over the galaxy. The reports suggested that a single race dubbed "Hedoth" has systematically swept through galaxy and pulverized every sentient civilization.

Incidentally, the exploration consisted of vessels from three large Earth corporations or, as they are called in the game, CorpoNations (Rimtech, Mil-Agro, and Neuropa). It began as an industrial alliance, and the opportunity to plunder alien technology spurred them onwards towards the Hedoth homeworld. As survey ships finally reached the Hedoth sector, the three CorpoNations massed their war fleets nearby. They were prepared for the ultimate conflict, only to discover that man's second worst fear was realized - the humanity is all alone in the universe. The Hedoth homeworlds were vacant..

The Hedoth left no clue of where they went, but their departure was remarkably tidy. Scattered installations and miscellaneous war machines were all they left behind.

The discovery set off a frenzied "gold rush" amongst the three CorpoNations, a rush for technology and power it brings.

The game is fully 3D, mapped by an invisible grid; vehicles tilt to meet hilly terrain, and projectiles can be realistically blocked by obstructions. The camera is free-moving and can zoom in and out, rotate, and pan up or down while navigating the battlefield.

In the game, the usual RTS elements such as base building and resource gathering are followed, but Metal Fatigue differs from the other titles by offering players to do battle with giant high-tech Mech-style juggernaut
Juggernaut
A juggernaut in colloquial English usage is a literal or metaphorical force regarded as mercilessly destructive and unstoppable.Originating in ca...
s called Combots.

Combots can be customized by four main combot parts: a torso; a single pair of legs; and two separate pieces of arm (excluding the combot pilots). The game also allows players to salvage destroyed enemy Combots and their various parts.

In-game, units are unable to raise in rank through experience. However, after a completion of a single player mission, the player is given points, that could be used to upgrade combot pilots, vehicles or structures.

The game also places an emphasis on multi-level warfare. The battlefield is divided into three layers of combat, an orbital level, a surface level and an underground level.