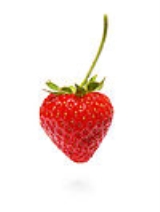 Encyclopedia
Fragaria is a genus
Genus
In biology, a genus is a low-level taxonomic rank used in the biological classification of living and fossil organisms, which is an example of definition by genus and differentia...
of flowering plant
Flowering plant
The flowering plants , also known as Angiospermae or Magnoliophyta, are the most diverse group of land plants. Angiosperms are seed-producing plants like the gymnosperms and can be distinguished from the gymnosperms by a series of synapomorphies...
s in the rose
Rose
A rose is a woody perennial of the genus Rosa, within the family Rosaceae. There are over 100 species. They form a group of erect shrubs, and climbing or trailing plants, with stems that are often armed with sharp prickles. Flowers are large and showy, in colours ranging from white through yellows...
family, Rosaceae
Rosaceae
Rosaceae are a medium-sized family of flowering plants, including about 2830 species in 95 genera. The name is derived from the type genus Rosa. Among the largest genera are Alchemilla , Sorbus , Crataegus , Cotoneaster , and Rubus...
, commonly known as strawberries for their edible fruit
Fruit
In broad terms, a fruit is a structure of a plant that contains its seeds.The term has different meanings dependent on context. In non-technical usage, such as food preparation, fruit normally means the fleshy seed-associated structures of certain plants that are sweet and edible in the raw state,...
s. Although it is commonly thought that strawberries get their name from straw being used as a mulch
Mulch
In agriculture and gardening, is a protective cover placed over the soil to retain moisture, reduce erosion, provide nutrients, and suppress weed growth and seed germination. Mulching in gardens and landscaping mimics the leaf cover that is found on forest floors....
in cultivating the plants, the etymology of the word is uncertain. There are more than 20 described species
Species
In biology, a species is one of the basic units of biological classification and a taxonomic rank. A species is often defined as a group of organisms capable of interbreeding and producing fertile offspring. While in many cases this definition is adequate, more precise or differing measures are...
and many hybrids and cultivar
Cultivar
A cultivar'Cultivar has two meanings as explained under Formal definition. When used in reference to a taxon, the word does not apply to an individual plant but to all those plants sharing the unique characteristics that define the cultivar. is a plant or group of plants selected for desirable...
s. The most common strawberries grown commercially are cultivars of the garden strawberry
Garden Strawberry
The garden strawberry, Fragaria × ananassa, is a hybrid species that is cultivated worldwide for its fruit, the strawberry. The fruit is widely appreciated for its characteristic aroma, bright red color, juicy texture, and sweetness...
, a hybrid known as Fragaria × ananassa. Strawberries have a taste that varies by cultivar, and ranges from quite sweet to rather tart. Strawberries are an important commercial fruit crop, widely grown in all temperate regions of the world.

Strawberries are not true berries. The fleshy and edible part of the fruit is a receptacle, and the parts that are sometimes mistakenly called "seeds" are achene
Achene
An achene is a type of simple dry fruit produced by many species of flowering plants. Achenes are monocarpellate and indehiscent...
s.

As a rough rule (with exceptions), strawberry species with more chromosomes tend to be more robust and produce larger plants with larger berries.

A number of species of butterflies
Butterfly
A butterfly is a mainly day-flying insect of the order Lepidoptera, which includes the butterflies and moths. Like other holometabolous insects, the butterfly's life cycle consists of four parts: egg, larva, pupa and adult. Most species are diurnal. Butterflies have large, often brightly coloured...
and moth
Moth
A moth is an insect closely related to the butterfly, both being of the order Lepidoptera. Moths form the majority of this order; there are thought to be 150,000 to 250,000 different species of moth , with thousands of species yet to be described...
s feed on strawberry plants: see list of Lepidoptera that feed on strawberry plants.