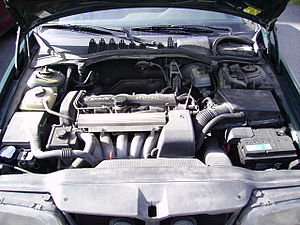 Henry Ford
Henry Ford
Henry Ford was an American industrialist, the founder of the Ford Motor Company, and sponsor of the development of the assembly line technique of mass production. His introduction of the Model T automobile revolutionized transportation and American industry...
had a inline-five engine developed in the late 1930's to early 1940's for a compact economy car design, which never saw production due to lack of demand for small cars in the United States. Consequently, a straight-five engine did not see production for passenger cars until Mercedes-Benz introduced the OM617 diesel
Mercedes-Benz OM617 engine
The OM617 engine family was a straight-5 Diesel automobile engine from Mercedes-Benz used in the 1970s and 1980s. With some Mercedes-Benz 300D/300SD diesels already exceeding 500,000 miles, it's considered to be one of the most reliable engines ever produced .-OM617.912:The OM617.912 was a...
in 1974. The first production petrol straight-five was the 2.1 R5 introduced by Volkswagen Group in the Audi 100 towards the end of the 1970's, developments of which powered the Audi Quattro
Audi Quattro
The Audi Quattro is a road and rally car, produced by the German automobile manufacturer Audi, now part of the Volkswagen Group. It was first shown at the 1980 Geneva Motor Show on 3 March.The word quattro is derived from the Italian word for "four"...
rally racer. Since Volvo
Volvo
AB Volvo is a Swedish builder of commercial vehicles, including trucks, buses and construction equipment. Volvo also supplies marine and industrial drive systems, aerospace components and financial services...
introduced their Volvo 850
Volvo 850
The Volvo 850 is a compact executive car produced by Volvo Cars from 1992 to 1997 and designed by Jan Wilsgaard. Available in sedan/saloon and station wagon/estate body styles, the Volvo 850 was notable as the first front-wheel drive vehicle from this Swedish manufacturer to be exported to North...
in 1992, much of their lineup has switched to straight-five power, with their engines also seeing use in Ford
Ford Motor Company
Ford Motor Company is an American multinational automaker based in Dearborn, Michigan, a suburb of Detroit. The automaker was founded by Henry Ford and incorporated on June 16, 1903. In addition to the Ford and Lincoln brands, Ford also owns a small stake in Mazda in Japan and Aston Martin in the UK...
's Focus ST and RS models. Honda used straight-fives in the Vigor and Acura TL.

In the late 1990's, Rover Group
Rover Group
The Rover Group plc was the name given in 1986 to the British state-owned vehicle manufacturer previously known as British Leyland or BL. Owned by British Aerospace from 1988 to 1994, when it was sold to BMW, the Group was broken up in 2000 with the Rover and MG marques being acquired by the MG...
developed an in-house straight-five diesel engine, the Td5, for the Discovery and Defender. Volkswagen
Volkswagen
Volkswagen is a German automobile manufacturer and is the original and biggest-selling marque of the Volkswagen Group, which now also owns the Audi, Bentley, Bugatti, Lamborghini, SEAT, and Škoda marques and the truck manufacturer Scania.Volkswagen means "people's car" in German, where it is...
has used straight-five engines in their Eurovan, and have recently developed a different straight-five engine which is used in the Jetta
Volkswagen Jetta
Although the Golf had reached considerable success, in the North American markets, Volkswagen observed that the hatchback body style lacked some of the appeal to those who preferred the traditional three-box configuration...
and Rabbit
Volkswagen Golf
The Volkswagen Golf is a small family car manufactured by Volkswagen since 1974 and marketed worldwide across six generations, in various body configurations and under various nameplates – as the Volkswagen Rabbit in the United States and Canada , and as the Volkswagen Caribe in Mexico .The...
in North America. Fiat
Fiat
FIAT, an acronym for Fabbrica Italiana Automobili Torino , is an Italian automobile manufacturer, engine manufacturer, financial, and industrial group based in Turin in the Italian region of Piedmont. Fiat was founded in 1899 by a group of investors including Giovanni Agnelli...
also makes use of straight-fives (both petrol and diesel) in larger Fiat, Alfa Romeo
Alfa Romeo
Alfa Romeo Automobiles S.p.A. is an Italian manufacturer of cars. Founded as A.L.F.A. on June 24, 1910, in Milan, the company has been involved in car racing since 1911, and has a reputation for building expensive sports cars...
and Lancia
Lancia
Lancia Automobiles S.p.A. is an Italian automobile manufacturer founded in 1906 by Vincenzo Lancia and which became part of the Fiat Group in 1969. The company has a long history of producing distinctive cars and also has a strong rally heritage. Some modern Lancias are seen as presenting a more...
models. General Motors
General Motors
General Motors Company , commonly known as GM, formerly incorporated as General Motors Corporation, is an American multinational automotive corporation headquartered in Detroit, Michigan and the world's second-largest automaker in 2010...
has used Atlas-based straight-fives in their GMT 355 mid-size truck family
Chevrolet Colorado
The Chevrolet Colorado and its counterpart, the GMC Canyon, are mid-size pickup trucks by American carmaker General Motors. It was introduced in 2004 to replace the Chevrolet S-10 and GMC Sonoma compact pickups.-First generation :...
since 2004. 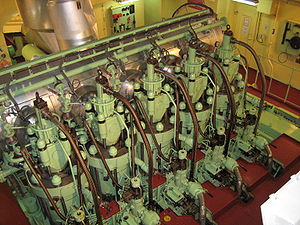 The five-cylinder engine's advantage over a comparable four-cylinder engine is best understood by considering power strokes and their frequency. A four-stroke cycle
Four-stroke cycle
A four-stroke engine, also known as four-cycle, is an internal combustion engine in which the piston completes four separate strokes—intake, compression, power, and exhaust—during two separate revolutions of the engine's crankshaft, and one single thermodynamic cycle.There are two...
engine fires its cylinders once every 720 degrees — the crankshaft makes two complete rotations. If we assume an even firing
Firing order
The firing order is the sequence of power delivery of each cylinder in a multi-cylinder reciprocating engine.This is achieved by sparking of the spark plugs in a gasoline engine in the correct order, or by the sequence of fuel injection in a Diesel engine...
engine, we can divide 720 degrees by the number of cylinders to determine how often a power stroke occurs. For a four-cylinder engine, 720° ÷ 4 = 180° so there is a power stroke every 180 degrees, which is two power strokes per revolution of the crankshaft. A V8 engine
V8 engine
A V8 engine is a V engine with eight cylinders mounted on the crankcase in two banks of four cylinders, in most cases set at a right angle to each other but sometimes at a narrower angle, with all eight pistons driving a common crankshaft....
gets a power stroke every 90 degrees: 720° ÷ 8 = 90°, which is four power stokes for each revolution of the crankshaft.

A given power stroke can last no more than 180 degrees of crankshaft rotation, so the power strokes of a four-cylinder engine are sequential, with no overlap. At the end of one cylinder's power stroke another cylinder fires.

Every cylinder added beyond five increases the overlap of firing strokes and makes for less primary order vibration. An inline-six gets a power stroke every 120 degrees. So there is more overlap (180° - 120° = 60°) than in a five-cylinder engine (180° - 144° = 36°). However, this increase in smoothness of a six-cylinder engine over a five-cylinder engine is not as pronounced as that of a five-cylinder engine over a four-cylinder engine. The inline-five loses less power to friction as compared to an inline-six. It also uses fewer parts, and it is physically shorter, so it requires less room in the engine bay, allowing for transverse
Transverse engine
A transverse engine is an engine mounted in a vehicle so that the engine's crankshaft axis is perpendicular to the long axis of the vehicle. Many modern front wheel drive vehicles use this engine mounting configuration...
mounting.

A five-cylinder engine is longer and more expensive to manufacture than a comparable four-cylinder engine, but some manufacturers feel these costs are outweighed by its greater capacity in a smaller space than a six-cylinder.

From the standpoint of driving experience, five-cylinder engines are noted for combining the best aspects of four- and six-cylinder engines. They generate more power and torque than four-cylinder engines, while maintaining the fuel economy and "pep" of smaller six-cylinder engines. Five-cylinder turbos have been used on more than one occasion in sport and racing applications for their balance of performance qualities. The Volvo S60 R has a 2.5 litre
Litre
pic|200px|right|thumb|One litre is equivalent to this cubeEach side is 10 cm1 litre water = 1 kilogram water The litre is a metric system unit of volume equal to 1 cubic decimetre , to 1,000 cubic centimetres , and to 1/1,000 cubic metre...
turbocharged inline five-cylinder engine which is capable of generating 300 bhp and 295 lbfft of torque across a large amount of its rpm ranges. The new Ford Focus RS performance car uses the same Volvo 5-cylinder engine, developed (by Ford) to very similar power levels, and is one of the most powerful FWD production cars ever created.

The smallest production straight-five was found on the 1981 Audi 100
Audi 100
The restyled C2 Audi 100 was launched in 1976, with an in-line five-cylinder engine...
, with 1921 cc of displacement. Audi used straight-five engines in many of their cars between 1977 and the early 1990s, and started using them again today along with VW. Mercedes used five-cylinder configuration for their diesels in the 1970s all the way to the 2000s. The GM
General Motors
General Motors Company , commonly known as GM, formerly incorporated as General Motors Corporation, is an American multinational automotive corporation headquartered in Detroit, Michigan and the world's second-largest automaker in 2010...
Atlas L5R 3700 is the largest at 3,654 cc. Currently Volvo Cars uses the straight five-cylinder engine as their mainstay engine in every vehicle in the lineup. All of the inline five engines used by Volvo
Volvo Cars
Volvo Car Corporation, or Volvo Personvagnar AB, is a Swedish automobile manufacturer founded in 1927, in Gothenburg, Sweden. It is owned by Zhejiang Geely Holding Group. Volvo was originally formed as a subsidiary company to the ball bearing maker SKF. When Volvo AB was introduced on the Swedish...
and Ford are built at the Volvo Skövde engine plant in Skövde
Skövde
Skövde is a locality and the seat of Skövde Municipality, Västra Götaland County, Sweden with 34 446 inhabitants .Skövde is situated some 150 km northeast of Gothenburg, between Sweden's two largest lakes, Vänern and Vättern. It sits on the eastern slope of a low mountain ridge Billingen ,...
, Sweden
Sweden
Sweden , officially the Kingdom of Sweden , is a Nordic country on the Scandinavian Peninsula in Northern Europe. Sweden borders with Norway and Finland and is connected to Denmark by a bridge-tunnel across the Öresund....
.

The Audi S-5, 2226 cc, 4v/cyl, was also used on the Italdesign Aztec
Italdesign Aztec
The Aztec is a concept car introduced by ItalDesign in 1988. The two-seater is unique because the driver and passenger are separated, requiring the two parties to communicate electronically. It was fitted with a five cylinder DOHC Audi Turbo engine, and using Lancia Delta Integrale derived...
. It could produce 200 bhp at 6,200 rpm.

The smallest straight-five was found on the Honda racing motorcycle, the 125-cc-class RC149, raced in 1966. The five-cylinder configuration was used because it shared components (and hence simultaneous development) with the two-cylinder engine, 50 cc, RC116.
The source of this article is wikipedia, the free encyclopedia.  The text of this article is licensed under the GFDL.