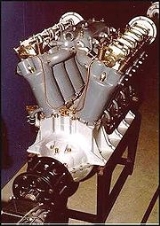 Overview
A V8 engine is a V engine
V engine
A V engine, or Vee engine is a common configuration for an internal combustion engine. The cylinders and pistons are aligned, in two separate planes or 'banks', so that they appear to be in a "V" when viewed along the axis of the crankshaft...
with eight cylinder
Cylinder (engine)
A cylinder is the central working part of a reciprocating engine or pump, the space in which a piston travels. Multiple cylinders are commonly arranged side by side in a bank, or engine block, which is typically cast from aluminum or cast iron before receiving precision machine work...
s mounted on the crankcase
Crankcase
In an internal combustion engine of the reciprocating type, the crankcase is the housing for the crankshaft. The enclosure forms the largest cavity in the engine and is located below the cylinder, which in a multicylinder engine are usually integrated into one or several cylinder blocks...
in two banks of four cylinders, in most cases set at a right angle to each other but sometimes at a narrower angle, with all eight piston
Piston
A piston is a component of reciprocating engines, reciprocating pumps, gas compressors and pneumatic cylinders, among other similar mechanisms. It is the moving component that is contained by a cylinder and is made gas-tight by piston rings. In an engine, its purpose is to transfer force from...
s driving a common crankshaft
Crankshaft
The crankshaft, sometimes casually abbreviated to crank, is the part of an engine which translates reciprocating linear piston motion into rotation...
.

In its simplest form, it is basically two straight-4
Straight-4
The inline-four engine or straight-four engine is an internal combustion engine with all four cylinders mounted in a straight line, or plane along the crankcase. The single bank of cylinders may be oriented in either a vertical or an inclined plane with all the pistons driving a common crankshaft....
engines sharing a common crankshaft
Crankshaft
The crankshaft, sometimes casually abbreviated to crank, is the part of an engine which translates reciprocating linear piston motion into rotation...
. However, this simple configuration, with a single-plane crankshaft, has the same secondary dynamic imbalance
Engine balance
Engine balance is the design, construction and tuning of an engine to run smoothly. Improving engine balance reduces vibration and other stresses and can improve the overall performance, efficiency, cost of ownership and reliability of the engine, as well as reducing the stress on other machinery...
problems as two straight-4s, resulting in vibrations in large engine displacement
Engine displacement
Engine displacement is the volume swept by all the pistons inside the cylinders of an internal combustion engine in a single movement from top dead centre to bottom dead centre . It is commonly specified in cubic centimeters , litres , or cubic inches...
s.

I just bought a 1979 ford bronco and after doing what research I could find on it I might have done really well with this purchase. But I'm not for su...

Is it a powerful engine
More
x